Stock Trader's Almanac: What to Expect From April

Our “Best Six Months” switching strategy, which is found in our annual Stock Trader’s Almanac, is basically the flip side of the old “sell in May and Go Away” adage, explains Jeffrey Hirsch, seasonal trading expert and editor of Stock Trader's Almanac.

After decades of historical research, we discovered that most market gains occur during the months November through April. Investing in the Dow Jones Industrial Average between November 1st and April 30th each year and then switching into fixed income for the other six months has produced reliable returns with reduced risk since 1950.

As we enter the last month of the Best Six Months, the market logged its first down quarter in two years since the beginning of the pandemic. Going back to 1930 when our S&P 500 data begins Q1 was positive 55 years and negative 37 times over the 92-year span.

What jumped out at us were the midterm years that had losing first quarters. In the table we compiled here, the events during these years have an eerie resonance to what’s happening today in 2022. War, conflict, inflation, recession, and rate hikes were common themes in these midterm years. 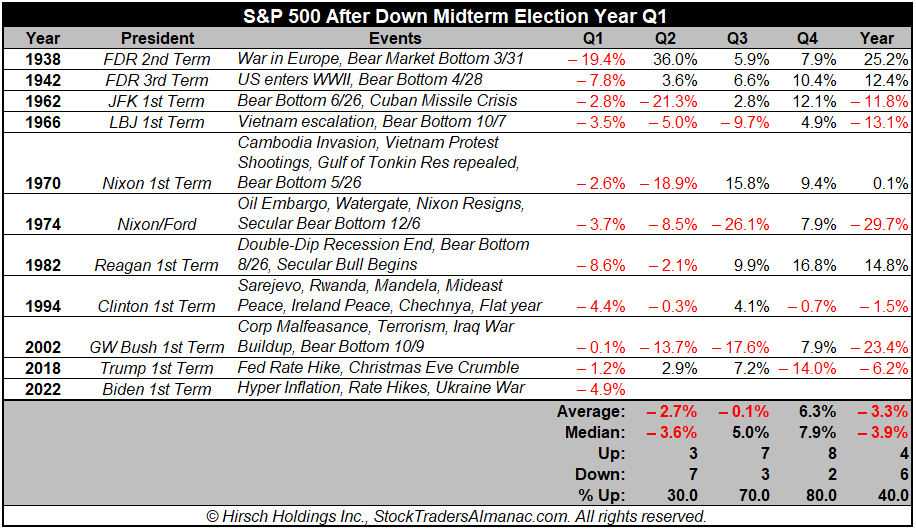 In general, after a down midterm Q1, losses tended to carry over into Q2 and the market began to find its footing in Q3 and rally into Q4. Protracted crises in 1962, 1966, 1970, 1974, and 2002 delivered the most negative results though all had significant bear market bottoms.

At the Q1 crossroads in 2022 we are faced with similar conditions. Persistent hyper inflation, a rising rate environment that’s stoking inverted yield curve/recession fears, the brutal war in Ukraine and the new Cold War 2.0 with Russia are threatening a bear market on the backdrop of the heightened volatility we have been warning of since our Annual Forecast in December.

Technically we are encouraged by the fact that the intraday low on February 24, the day Russia invaded Ukraine, has held and survived at least one solid test on March 14. We have been using the NASDAQ 100 Index (NDX), which is tracked by the Invesco QQQ Trust (QQQ), as our benchmark of late as it has been leading the market in both directions for several years.

As we have illustrated in the chart below the lows on February 24 and March 14 with the late-February/early-March rally in between has created a potential W-123 swing bottom. The 14300 level around point 2 becomes support, which is also right at the 50-day moving average. NDX has bumped into resistance around 15000 and the 200-day moving average. 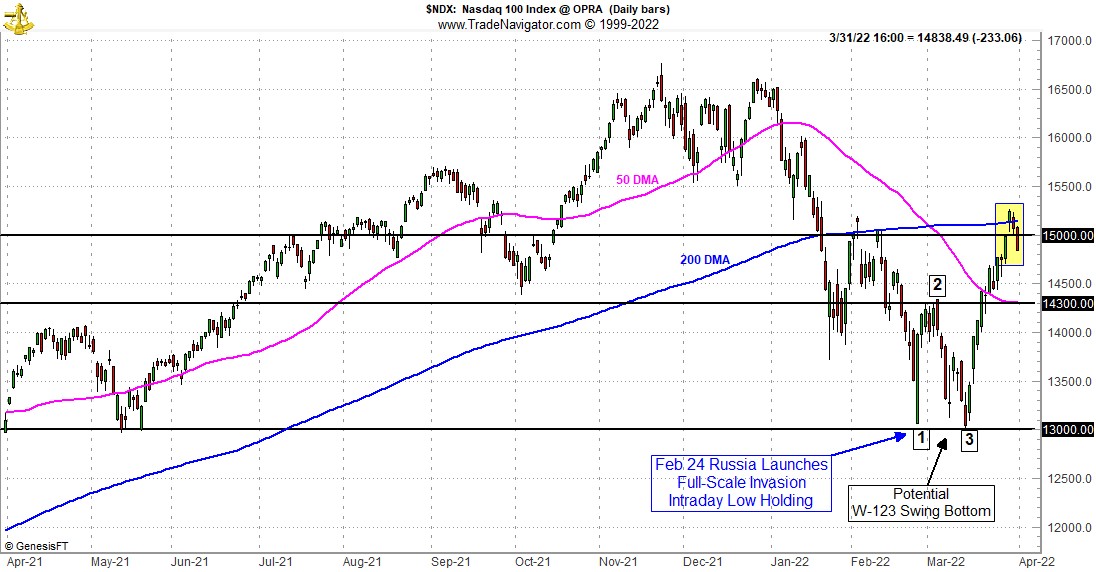 It was also encouraging that the market had rallied back up to and through the 200-day moving average. Reclaiming the 200 DMA again would be most constructive. Market internals are also improving with advancers recently outpacing decliners and new highs beating new lows.

Continued improvement technically and internally is needed for the rally to have staying power. Barring any major escalation in Ukraine, we suspect the market to log additional gains in April as the Best Six Months come to a close and then move sideways during much of Q2 and Q3 — and likely testing the lows before rallying in Q4 and into 2023.