First, while the Fed is likely to continue hiking interest rates, traders believe that recent CPI data and other factors will allow the Fed to hike at a slower pace. Second, China, one of the biggest gold consuming nations in the world, is loosening its COVID restrictions.

Third, central banks are buying gold with both hands. In fact, central bank gold demand hit a 55-year high in Q4. These factors are combining with cyclical forces that were poised to drive gold higher, anyway. 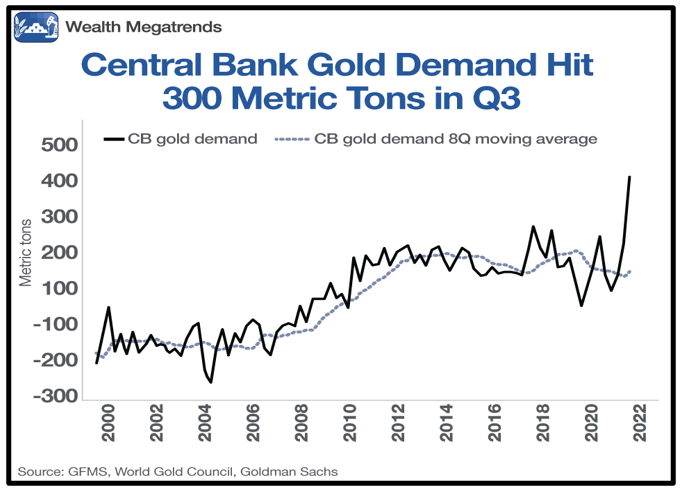 In 2021, it produced 5.9 million ounces of gold. Newmont’s massive reserves should allow it to sustainably produce gold over the next several decades. It operates 14 separate projects across four continents. Ten of them are located in North and South America, while the remaining four are in Africa and Australia.

Our portfolio position in NEM as been under pressure for a while, and disappointing earnings on November 1 didn’t help. While the company is on track to produce 6 million ounces of gold at an all-in sustaining cost of $1,150 per oz. this year, as well as copper, silver, lead and zinc, its earnings of 27 cents a share missed estimates.

That drove the stock to a 52-week low. But with gold starting to rally, that earnings miss doesn’t matter, and Newmont is perking back up. Meanwhile, the company is in line to meet its full-year guidance of 6 million ounces of attributable gold production.

Newmont’s dividend yields 5.3% annually and the company declared its Q4 distribution of 55 cents per share on Oct. 27. NEM has held its payments steady over the last eight quarters, but it’s expected to start raising them soon. Analysts are projecting 3% annual growth moving forward.