Time to Buy the Airlines?

Airline stocks are on sale; indeed the stocks are the most discounted since 9/11, notes Frank Holmes, CEO of US Global Investors and editor of Frank Talk.

Ever on the hunt for a great bargain, billionaire investor Warren Buffett boosted his company’s stake in Delta Air Lines (DAL) once again.

Berkshire Hathaway (BRK.B) acquired some 976,000 Delta shares last week for roughly $45.3 million, according to a filing on Monday, raising its total holdings to 17.9 million shares. This was enough to bring Buffett’s ownership of the U.S. long-haul carrier up to more than 11 percent.

Once a critic of airline stocks, Buffett has become one of their greatest champions, noting the industry’s strong fundamentals and the fact that it’s protected by an economic moat.

Accumulating shares now appears to be a strategic move to capitalize on lower fuel costs — Brent crude oil is down 30 percent so far this year — as well as coronavirus-impacted travel, which has depressed airline stock prices.

Buffett isn’t alone in thinking airlines look like a steal right now. In a note to clients this week, Citigroup analyst Stephen Trent maintained his Buy ratings on Delta, United Airlines (UAL) and Spirit Airlines (SAVE), writing that “if coronavirus concerns fade in the coming weeks and the U.S. is able to avoid recession, this scenario could see a recovery in ex-Asia demand, which could lead airline stock prices and earnings streams to stabilize.”

As one the most exposed industries to global travel disruptions, airlines have seen a deeper selloff than the market and now look like an attractive bargain.

So far, COVID-19 has had a far greater impact on global airline stocks than the 2002-2003 SARS epidemic did. The chart below shows the daily percent change of the NYSE Arca Global Airlines Index starting on the day of the first reported incident of either infection — November 15, 2002 in the case of SARS, December 31, 2019 in the case of COVID-19.

Airline stocks found their bottom on the 77th trading day into the SARS epidemic, down approximately 25 percent. They exceeded that level in close to half the time during the COVID-19 outbreak. 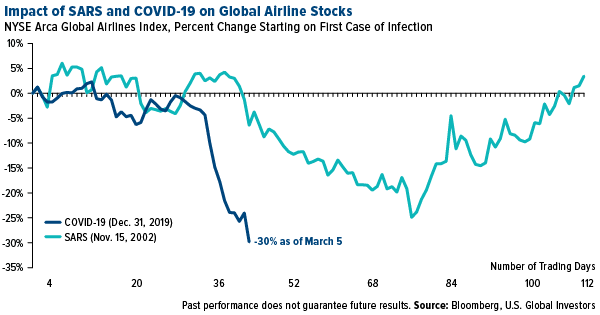 Obviously there are multiple factors investors should consider, including time period and asset class, but as a general rule, when the RSI falls below 30, it’s been a good buy signal, and anything below 20 has been a screaming buy. Buffett presumably knew this before the rest of us. 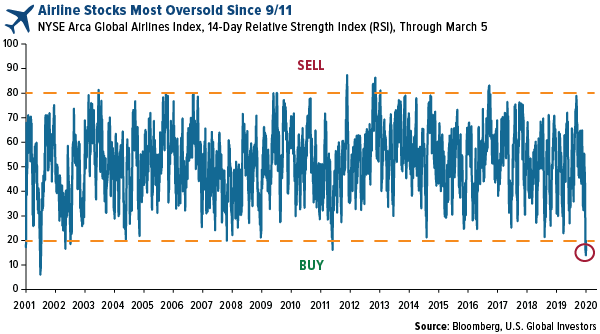 As the airline and travel industry are suffering globally due to the coronavirus outbreak, now could be a buying opportunity before operations return to usual. Demand for flying will return because people will always needs to get from point A to point B.

Meanwhile, our airline sector fund — the U.S. Global Jets ETF (JETS) — has been attracting heavy buying in the last few weeks. JETS is the only fund on the market that focuses entirely on the global airline industry, with an emphasis on domestic carriers.

Americans in some states are starting to see their economies open and it probably won’t be too...

Can I really be recommending an airline stock — especially after Warren Buffet just got done s...

We are upgrading Harley-Davidson (HOG) to reflect our positive view of the company’s new strat...