Sponsored Content - This week we’ll get fresh clues as to just how serious “Joliet Jay” Powell and his comrades at the Fed are in their nascent “hawkishness,” says Chris Temple, editor and publisher, National Investor Publishing.

As I said in my commentary of a few days ago and in other recent comments and interviews, the Fed ostensibly plans to at least try to dial back some of the four-decade-high price inflation it has brought about; perhaps more than we thought.

You good folks reading this know that the recent surge in consumer and producer prices can be laid most directly at Powell’s doorstep. That hasn’t stopped him from regularly channeling Joliet Jake Blues, though, as I have often quipped.

The question now is what Powell and the Fed will do…how far they are willing to go…at how much risk they are willing to put their various precious bubbles…with all the signs pretty much pointing to that “sticky” inflation I just wrote to you about. After all—though Powell was in denial for so long and the markets generally with him—the first couple trading days last week already had a different feel to them. 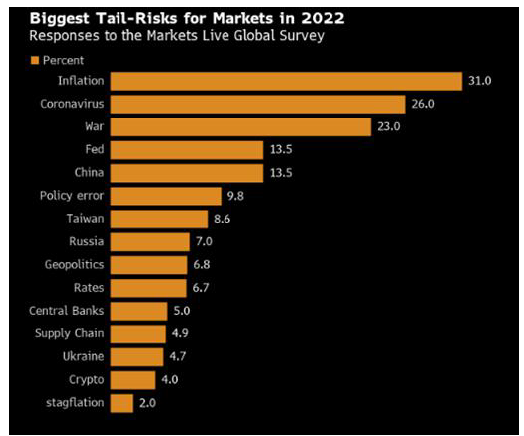 Indeed, even before the Wednesday, January 5th, release of the minutes from last month’s FOMC meeting caused more substantial “hiccups” as one commentator called them, not a few investors were quickly repositioning themselves out of 2021’s “Wonderland.” Wanting to get out of in front of a hawkish Fed—and no longer concerned to “show” at year-end that they were positioned for that high inflation/low interest rates environment, with all the peaches, cream, and denial of reality that went with it all—some started to rather abruptly “re-price” some things.

Then the hammer really fell at mid-afternoon Wednesday, when the Fed suggested a hawkish course ahead (more than has been baked into things) that futures markets saw as bringing a near-even chance of four rate hikes in 2022. Further, Powell & Company 1. Seem set on this course regardless of the present state of affairs regarding the latest strain of the Fauci flu, and 2. Also seem set on starting to reduce the size of their nearly $9 trillion balance sheet imminently.

We need to keep this in perspective, at least for the time being. After using an industrial-sized fire hose to boost things, especially over the last couple years, the Fed—at least initially—will be using a straw in relative terms to remove this liquidity. And this is all still just TALK. So we’ll see how they follow through in the months ahead, or don’t.

With interest rates accelerating their recent rip higher, it was generally the most overvalued technology/momentum names that got hit. Of the major indices, The Nasdaq got whacked the most. As for the Dow, it hit a new all-time high Tuesday before surrendering relatively less Wednesday. That latter performance bolstered the view (shared by yours truly, as you know) that we are likely to see a much more substantial “rotation” out of fad, meme, and similar stocks into cyclicals, value, and commodities over the course of the year, provided that bond yields (and the still-percolating dollar, which could spurt higher as well) crawl or slowly ratchet higher rather than race.

Byron Wien Hits It Out of the Park

Even before the possibility became more real to the rest of us, Blackstone’s Byron Wien (joined again by colleague Joe Zidle, chief strategist of the firm’s Private Wealth Solutions Group) had tagged four Fed rate hikes as one of their Ten Surprises for 2022. Sponge that I am, Wien’s annual list is always something I pay attention to, and this year I must say that one of us could have been looking over the other’s shoulder on just about all of these!

Byron and Joe’s Ten Surprises of 2022 are as follows (with a few added comments of my own in parentheses following):

There’s no question volatility is returning; and with more of a two-way market for most everything than we saw in 2021, where—just when you thought it was safe to be bearish for at least a little while—you got run over. The timing of a sharper correction remains up in the air. Maybe it has started. Maybe this (for now) is another false uber-bearish signal; don’t think Powell (if this weakness continues into his confirmation hearing this week) won’t give the bears once more some reason for pause, and jawbone the markets back up.

Whether the Fed overdoes things again, of course, is one of the major risks as we kick off 2022. Few can deny any longer that Joliet Jay has started to reap the whirlwind (actually, consumers and businesses have) of the most aggressive monetary expansion of all time. That the Fed truly is WAY behind the inflation curve it brought about is beyond dispute.

The next overreaction could be a policy error as bad as or worse than the first. Normally, markets don’t get hysterical when the Fed starts raising rates anew; indeed, that is typically taken as a good sign that 1. The economy is strong enough to have a gentle “governor” applied and 2. The central bank moves slowly enough so as not to rattle nerves too much. The “two steps and a stumble” rule may apply here: the first two rate hikes elicit relatively little negative response, but—only after it appears as though the moves will continue almost open-ended—will markets really start to swoon.

As I suggested above, I have a hard time believing we’ll get even to that 2.75% on the 10-year Treasury suggested by Wien and Zidle. Perhaps in isolation, the US economy in its present state could withstand that. But with the Fed the de facto central bank of the world, I’m dubious.

Europe is already rolling over. That “marketized default” of Evergrande (and God knows what else) and a nascent recession in China, home to the globe’s second-largest economy, also needs to be kept in mind. There’s no question that any major stresses will quickly run that US Dollar Index back into triple-digit territory, making a mess out of a lot of things.

That we need to prepare for a very sub-par year for stocks generally is clear. The market will have to give back some of the last couple years’ gains; and the Fed knows and will tolerate this provided things don’t become abrupt or irrational…and the markets stay liquid. The repo markets will require close scrutiny. One sign that whatever Fed tightening has occurred could be ending will be if you see any of those “plumbing problems” creep up again as financial market participants’ activity starts to “seize up.” 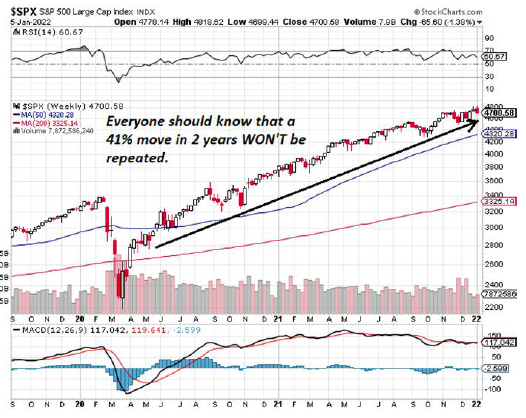 Let’s remember, too, that—with any significant action on Biden’s Build Back Better boondoggle a non-starter and chances slim for any new “stimulus” giveaways—one of the economy’s major recent tail winds is pretty much gone. I don’t think it will be long before the “stag” comes into the stagflation equation in the form of notably slowing growth.

For present purposes, I am contemplating some additional directional trades: 1. If we see a near-term confirmation that yields will break out above their early 2021 highs, and 2. The Nasdaq breaks below its two most recent lows.

Aside from that, I’m most animated on both the uranium space right now and conventional energy (notably, crude oil’s renewed rally has barely blinked at the trouble elsewhere last week even with OPEC following through on adding some production back.)

If you are not already a Member, visit Chris Temple at NationalInvestor.com