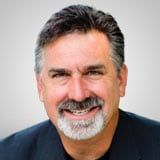 Within reason, you’re much better off trading more volatile stocks. It truly is “better the devil you know,” says Dave Landry, founder and president of DaveLandry.com. More Trading Lessons every Friday.

In this article, we will look at how to measure and gauge a stock’s volatility and why you should generally trade more volatile stocks.

Before we get into the math, just know that you don’t have to worry about the math. Just like you can get light by flipping a light switch without knowing much about electricity, you can look at the volatility reading to see how volatile a stock is, or actually was.

Volatility is how much a stock has bounced around in the past and it suggests how much it will continue to bounce around in the future. Let your computer do the math for you and never forget to first and foremost simply eyeball the chart to help gauge volatility.

Keep in mind that statistics are worthless. 75.3% of all people know this. Seriously, statistics are pretty much worthless when it comes to the markets. In order for statistics to work, markets would have to be normally distributed. And, they are not. We’ll leave the well-thought compelling arguments to others.

For purposes of this article, the argument is simple. If statistics truly did work, those who had the most knowledge of statistics or the fastest computers would own the markets.

HV is the standard deviation of day-today price changes expressed as an annual percentage. Assuming that a market had a 50-day HV reading of 20. Since it is an annualized measurement, this would suggests on a statistical basis that if the volatility remained constant, then the market measured would have a 68% chance (on standard deviation) of trading being 20% higher or 20% lower a year from now based on how it has traded in the previous 50-days.

It is almost an absolute certainty that volatility will not remain constant. And, the measurement assumes a normal distribution (i.e. that statistics work in financial markets) which is a fallacy. However, even with the flaws of using a statistical indicator on something that isn’t normally distributed knowing the HV of the market can still be quite useful.

Using HV as a precise predictor of where a stock will be in the distant future is not a good idea due to the aforementioned reasons. However, using it to gauge where the stock will likely be over the short-term can be quite useful.

When using HV, the easiest way to understand the true volatility is to compare it to the overall market. This is very similar to so called “Beta” measurements. For example in Summer 2015, the S&P had a 50-day HV reading of 10. Stocks with a reading above 10 have been more volatile than the market and stocks with an HV reading below 10 have been less volatile than the market.

Again, notice the past tense. The stocks “have been” more or less volatile than the market. This is why the formula has the word “historical” in the name. As Yogi said, “Predictions are difficult, especially about the future.”

What is the right volatility?

I’m often asked what volatility reading potential candidates should have. The answer is that it depends. The overall market’s volatility waxes and wanes.
So, start there. As a general statement, you cannot beat a market with stocks that do no move more than the market itself. Therefore, at the least, you want to trade stocks that are more volatile than the overall market.

At the time of this writing, I’m finding the best opportunities in stocks with HV readings in the 30-60 range. These stocks are 3 to 6 times more volatile than the overall market basis the S&P benchmark.

The ultimate goal is to make money as fast as possible. With less volatile stocks, you’ll have to wait longer for moves. And, of course, something bad can still happen.

Once in a stock, you are looking for an increase in volatility in the direction of the trend. Again, you want to make money, and fast. The faster the move, the greater the expansion in volatility.

If the volatility is already extreme, one has to wonder how much more it can expand. Also, once volatility gets too high, the chances for the stock to still have meaningful structure (tradable patterns vs. trading erratically) likely no longer exists.+

Exceptions to the norm

On the flip side, sometimes extremely volatile stocks can still have structure and make large moves. These are stocks that by nature tend to be volatile such as rare earth, small high tech companies such as biotech, and initial public offerings.

In general, I’d much rather trade a more volatile stock than a less volatile one. If you know that a stock has made sizable moves in the past, you know that it will likely make sizable moves in the future. And, a stock must move in order for you to profit, period. Write that down. Therefore, you are much better off trading those that have demonstrated their ability to make large moves, within reason.

Of course, all predictions are about the future and there’s no guarantee that they will continue to move, but your chances are generally much better in capturing a move in a more volatile stock than a less volatile one.

Some convince themselves that they are taking less risk by trading less volatile stocks. Yet, in order to get the money management right, you have to trade more shares.

Suppose the stock gets halved overnight. You’re not faced with a 44% loss on your entire account. Just to get back to breakeven, you’ll have to make back nearly 79% on subsequent trades. Such drawdowns can be devastating not only monetarily but also mentally.

True, large moves are less likely to happen in stocks with lower volatility readings but something bad can always happen.

This doesn’t have to be a massive terrorist attack or a small country in the middle of the Mediterranean defaulting on their debt. It can be something as simple as an impropriety by a CEO. Ironically, the author made a hypothetical example in his latest book The Layman’s Guide To Trading Stocks and two days after the book was off to the printers a CEO of a sleepy well established “boring” company decides to do just that. He reasoned that since the secretary was an ex-porn star she wouldn’t mind some sexual advances. Okay, she was a soft porn star but you get the idea (the author goes to great lengths to make sure that his research is precise). The company lost $10 billion in one day just because a CEO couldn’t control his libido. The volatility tripled overnight.

So, keep in mind that something can always go wrong. Stocks with very low volatility stocks which appear quiet and safe on the surface can still make large adverse moves.

One size fits all?

One more point. There’s a popular method that recommends using an 8% stop in all stocks. This type of statement would be like saying that everyone should wear a medium size shirt—something the author hasn’t been able to do since he was 5-years old-after all, his nickname is “Big Dave.”

In many cases, using a tight stop will virtually guarantee you a loss. Yet, in spite of this, tight stops seem to be universally preached.

I have helped many traders go from being unsuccessful by getting stopped out often to catching more and more trends by simply suggesting that they loosen their stops.

Referring to chart below, let’s take a look at a volatile stock that the author recommends. At this time it had an HV reading of 77% while that S&P 500 had a reading of 14%.

So, the stock was 5 ½ times more volatile than the overall market. Eyeballing the chart, you can see even though the stock tends to trend higher, it did so with large daily ranges and day-to-day movements. In other words, it has been volatile.

Taking the high HV into consideration along with simply eyeballing the price movements, the author determined that in order to trade the stock, it would require an at least an 18% stop from the entry. Now, this might seem extreme to some but that’s what the stock called for. In fact, notice over the next few days that the stock dropped 18% as measured from high to low just before it took off.

A one-size-fits-all 8% stop would have gotten taken out quite easily. You would then have to watch in agony as the stock then takes off without you. 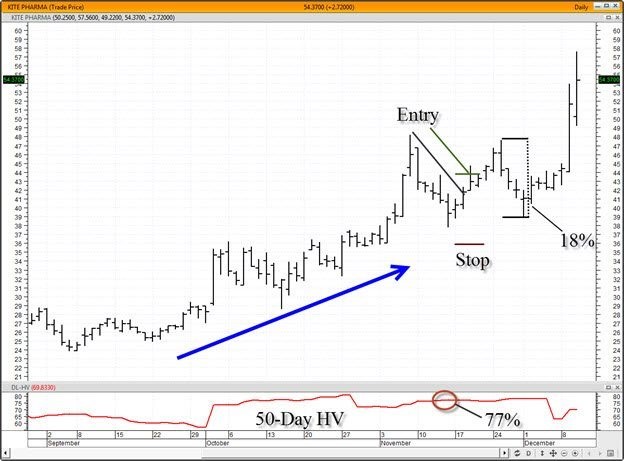 Referring back the figure xx, notice (highlighted) that with an 8 point/18% stop distance based on 2% risk of a 100k account, only 250 shares should have been traded in order to keep the risk in line.

True, 11% of the account in one stock is still significant but nowhere near 88% of the account based on a 1-point stop. Now, like our previous example, let’s say the stock gets a 50% haircut overnight. A 5.5% loss (11%/2) is nothing to sneeze at but at least your account will survive so that you can trade another day.

Also, psychologically a 5.5% loss is much easier to stomach then losing nearly half of your account by trading more shares with a tight stop.

You want comfort? Buy a comforter

Many refuse to trade more volatile stocks because they “can’t risk that many points or percent.” Yet, that’s exactly what they should be doing.
Just makes sure to compensate by trading fewer shares.

Volatility is a good thing but don’t forget about structure

Just because a stock is volatile doesn’t mean that you should blindly trade it. Stocks should not only be volatile, within reason, but also have three things:

By structure, the author is referring to the characteristics of the chart that would suggest that the new or emerging trend will likely continue. We’ll go into more detail on many aspects of these as we get further and further into stock selection in upcoming articles.

For now, just ask yourself what structure does the chart have?

Are there big picture patterns such as cup and handles, bases, or double/triple bottoms?

Does the stock trend to trade cleanly and persists or does it look like an electrocardiogram.

Is the trend accelerating or decelerating?

Where is the stock on a “net net” basis?

In other words, where did it close today relative to one-week ago, one-month ago, and so forth.

By seeking to avoid risk, many may be creating it by trading less volatile stocks and/or by using too tight of stops. More volatile stocks, within reason, can offer better opportunities and actually be less riskier than those that are less volatile.

It truly is the better the devil that you know.

So, stay selective in your setups and it's okay to trade move volatile stocks--remember, it's better the devil you know.

May the trend be with you!