We’ve all had that position on where we expect a company to beat/miss earnings heading into the day of the release.  The company then proceeds to post the results we expected, only to see the crowd react completely differently than we hoped for.

That’s generally why I don’t often trade earnings, and instead wait until after the report has been digested by the market to place a trade.  I will trade prior to earnings on occasion, but I prefer to wait for investors to overreact and then bet on mean reversion as cooler heads prevail.

Still, there are plenty of big trades that happen prior to earnings – sometimes the sort of trade you wouldn’t expect to see.  In fact, I just came across a covered call trade in Starbucks (SBUX) which happened the day of earnings and expires just three weeks later.

The $0.56 means the stock is protected down to $76.27 and generates just under a 1% yield.  However, it’s just a three-week trade so annualized we’re looking at about a 17% return.  Plus, there’s the potential for the stock to make money up to $80 before gains are capped.  If shares hit $80 by expiration, total return could be as high as 4.9% (once again, for a three-week trade).

What’s interesting about this trade is using a covered call prior to earnings.  Gains are capped at $80, which prevents the trader from reaping maximum gains if the shares spike higher.  The income received also only protects against a 1% drop in the shares.  In other words, the covered call trader is expecting the stock to go up, but not spike higher.  That’s a pretty specific scenario immediately after earnings.

After close, SBUX released their report and beat expectations.  Same store sales rose 4% compared to 3.5% expected.  Moreover, earnings per shares came in at 60¢, 4¢ more than estimated. Guidance was also raised for the remainder of the year.  Hard to argue the results were anything but great.

Then, the day after earnings, the stock was up 0.5% at all-time highs of $77.50.  So far, the covered call trade looks like it could be perfect.  There are still a few weeks to go, but the gap risk looks slim and this point.  At first glance, it seems the trader nailed this particular trade. 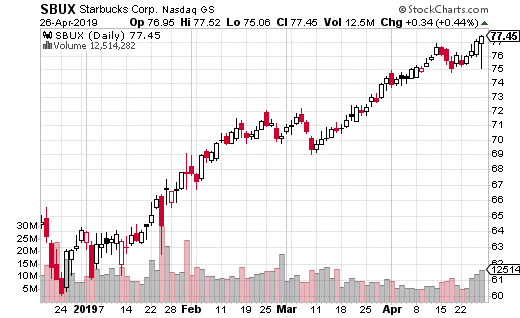 Even though earnings are already done, you can still make a similar covered call trade.  With most gap risk out of the way now that are earnings are released, you can more safely trade a longer-term covered call using the same 80 strike.

The June 80 call is trading for about 80¢ with the stock at $77.45.  That’s a bit over a 1% yield on the call plus the opportunity to earn another 3.3% of upside on share appreciation.  The yield isn’t quite as attractive now that earnings volatility has been taken out – but it’s also a much safer trade at this juncture.