The mantra last week was sell the rumor and buy the news. The previous Sunday night Trump stated there would be massive tariffs by the end of the week if there was no trade deal with China. The deadline was arbitrary to begin with, but is fair game in a negotiation. The stock market got hit very hard and by the end of the week, threat turned into reality.

Buy the rumor with selling the news is the opposite. It doesn’t have to materialize right on the news event. Sometimes there is a day or two lag. In this case, instead of buying the news (after they sold the rumor), the week started with a new round of selling. Turns out the Chinese had their own view of things and decided to retaliate with tariffs of their own. This is only part of the story. The other part is market sentiment.

Concerning the trade war, did you really think they were coming to a deal? I don’t think they are coming to a deal anytime soon. Why? I believe Trump is right. The Chinese take the long view and they are gambling Trump won’t win in 2020. It would be much easier for them to engage a Democrat President. This is likely going to be a serious miscalculation. By the time the United States and China get done taking swings at each other we are likely to experience a bear market over the next few years. The four-year cycle is peaking right now (or very close to it) and turns down through 2022. It’s a dangerous situation for President Trump but also for the Chinese who’ve experienced the popping of the mother of all market bubbles. The Chinese are still in a long-term bear market after the Shanghai Stock Exchange Index (SSE) made a lower high in 2015. If each side continues to take turns swinging at each other chances are very good they will be at fresh lows way before U.S. stock indexes. But we won’t be a big winner either.

What happens if the Chinese start unloading U.S. Treasuries? According to CNBC they hold $1.13 trillion in Treasury notes which is small in relation to the $22 trillion in outstanding debt on the books but 17.7% of securities held by foreign governments. That could contribute to a major hike in interest rates in the United States. Here’s where the experts go wrong. They believe if China were to follow through on this drastic step, a lower U.S. dollar would make U.S. corporations more competitive. But the truth of the matter as I’ve long told you the real level of world debt is now $244 trillion according to Bureau of International Settlement (BIS) figures and the level of derivative debt is estimated to be $1-2 quadrillion. According to Bloomberg, the $244 trillion figure is more than three times the size of the global economy. Throw in the derivatives? Forget about it. As long as interest rates are moderate, everything can keep going. If interest rates spike there will come a day of reckoning. As we’ve learn twice this century. Everything is fine until it isn’t.

So, if you believe in the butterfly effect, small details can become huge problems. None of this is on the table today but then again, the U.S.-China trade issues aren’t the only problems in the world. One of the unintended consequences of last week’s pullback is they hardly moved the needle when it came to market sentiment. Oh yes, the Cboe Volatility Index (VIX) went up but its coming right back down the other side. A number of experts in the business media were calling for a 5% to 10% correction and at the end it would be a buying opportunity. How do they know?

Here we go again, same mistakes made after 2000 and 2007. When you listen to people on television you get the impression we are dealing with a Burger King market. You can have the correction “your way.” As the markets were getting crushed on Monday morning several money manager types were asked whether they would keep buying. Several said yes, only a small percentage said no. It could be the same people  telling us to buy this market that are telling us the United States will be just fine if China starts unloading on the bond market.

So where are we at now? The SPX along with some other charts came down to a key inflection point that if violated will lead to a much larger correction. In the E-mini, there are a few decent semi-powerful readings. It’s likely another soft bottom. At this stage we are no where near the fear levels needed to stage a major leg up. The view here is since this is May and the end of the bullish side of the ledger as far as cycles are concerned, if the markets topped early, it could be gravity pulling it lower because what comes next is going to be especially rough. Wednesday was a bounce day as expected but no major sustained move is expected. 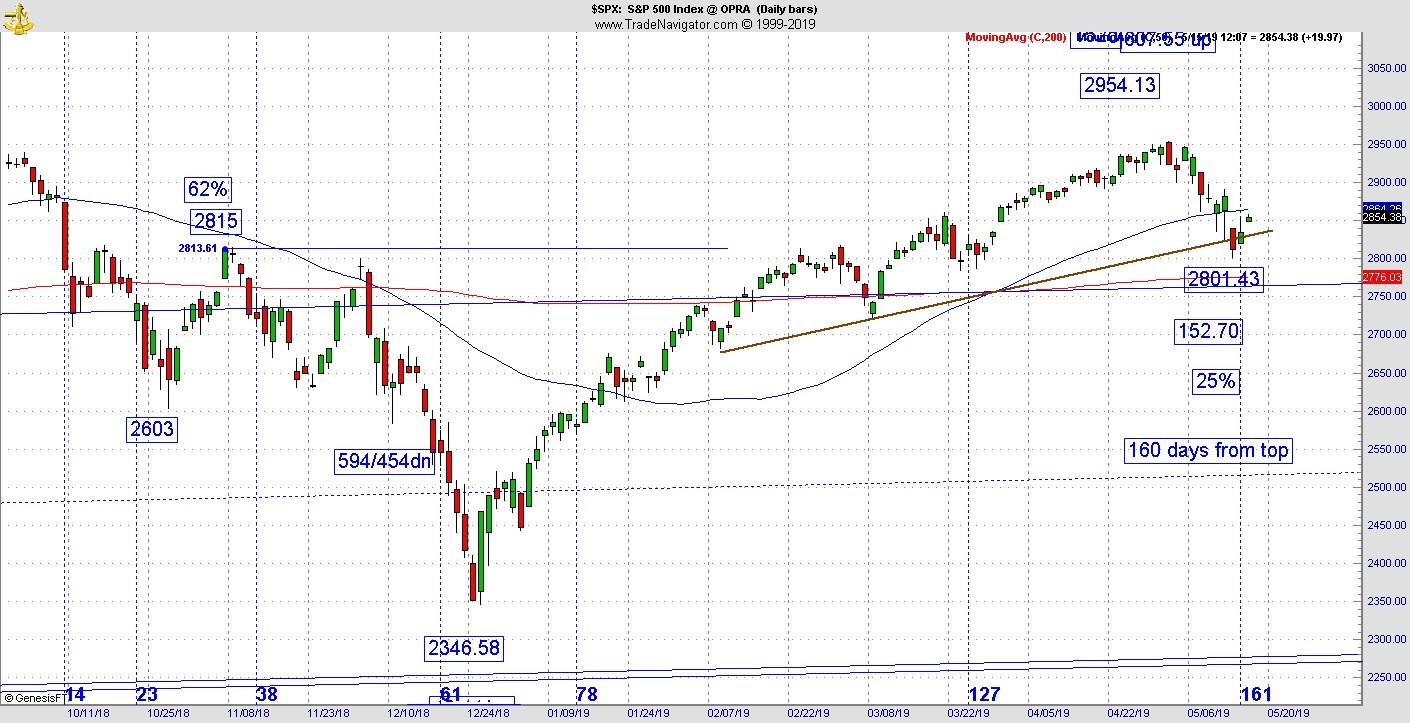