The long-term bull market in bonds that many believed ended in 2016 appears live and well, writes Al Brooks.

U.S. 30 year Treasury bond futures are in a strong breakout to a new all-time high (see chart). The bulls will probably soon begin to take some profits, which will lead to at least a two-week pullback. There was a nested wedge top from 2008 to 2016 on the monthly chart. That was a reliable trend reversal pattern. 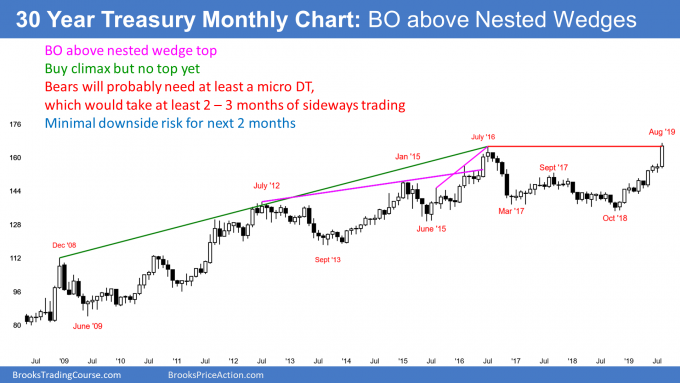 When there is a credible top, there is a 40% chance of one more new high and then a second top. If the bears get their second top, it would have a higher probability of leading to a trend reversal on the monthly chart.

Trends on the monthly long bond chart can last 20 to 30 years (though for the majority of analysts who believed the 2016 top signaled a bearish reversal, this trend lasted only three years).  Therefore, if there is a reversal down, interest rates yields will work higher (bond futures lower) until around 2040.

It is important to accept that there is currently no top on the monthly chart. The rally is very strong. A strong rally typically does not instantly reverse into a bear trend.

Traders usually have to see the rally stop for a few months before the bears can get a reversal. The topping process might take 10 to 20 bars, which means one to two years. Therefore, the downside risk near-term is small. Traders will buy the first reversal down.

The daily chart is in a parabolic wedge buy climax. It is testing the 2016 all-time high. The bulls who bought at that high can now exit breakeven. Many will.

Also, a huge buy climax will attract profit takers. The bulls have huge profits and soon will only want to buy pullbacks instead of that market. Their protective stop is far below. Soon, many will begin to take profits to reduce the risk of watching their windfall profits evaporate.

Their profit taking will probably result in two to three weeks of sideways to down trading. They will want to see if the bears can get a reversal down. If they cannot, the bulls will then buy again.

Many major countries now have negative interest rates. If you pay $100 for one of their bonds or notes, you do not have to pay them interest.

For example, if you buy a 10 year German bund (their equivalent of a US treasury note) with a face value of $100, you might have to pay $105. It will pay no interest. At the end of 10 years, Germany will give you $100 to buy back the bund. Your money will be tied up for 10 years and you will lose $5. You effectively lost about 5%, which is why the bund is said to have a negative interest rate.

Why would anyone buy a bund and lose 5% over 10 years? Why not just put the money in a safe deposit box? An obvious point is that safe deposit boxes get robbed and banks go out of business. No one wants to put a substantial part of their net worth in something that has any risk. The 10 year bund is safer.

Well, why doesn’t Germany sell a $1 trillion in bunds, pay no interest, and take the money and buy U.S. Treasuries that might pay 1.7%? Isn’t that a perfect carry trade? Perfect trades cannot exist.

If you think a trade is perfect, you are missing something. What is missing? Forex and interest rate fluctuation.

If Germany buys $1 trillion in U.S. Treasuries, they have to convert euros to dollars when they buy and then dollars to euros when they sell. What happens if the dollar falls 20% against the euro over the next 10 years? Germany would have collected 1.7% for 10 years, or 17%, but they would lose 20% in 10 years in the currency exchange.

Alternatively, what happens if the U.S. Treasury note futures market has a huge reversal down over the next 10 years? Remember, it is probably going to form a top within the next couple years. Germany will be locked into a 1.7% return at a time when interest rates might be 5% or more in five to 10 years. That is a bad investment.

If they need more money to run their government five years from now, they will have to pay 5% interest to sell their bunds. But they will only be collecting 1.7% on the $1 trillion they used to buy Treasuries. They would be losing 3.3%, or $33 billion dollars a year on their investment.