One investor has made an interesting bullish bet on high yield bonds, reports Jay Soloff.

After a couple weeks of calm markets, stocks and bonds saw an increase in volatility last week. There are couple of major market-moving issues being closely watched by investors.

The most obvious item is the potential impeachment of the President Donald Trump by the House of Representatives. Considering it is unlikely the Senate will never vote to convict the President even if he is impeached, I don’t think there will be a sustained selloff due to this news.

On the other hand, the October Federal Reserve Open Markets Committee (FOMC) meeting is about a month away. And, for the first time in a while, there’s not an obvious consensus on what the Fed is going to do. There is nearly an equal probability—based on Fed funds futures — between the Fed doing nothing and cutting rates another 25 basis points. In fact, the September meeting featured votes on either side, two votes for no cut and one for a larger 50-basis-point cut.

It’s this sort of uncertainty that can create periods of volatility in the market. Interest rates are typically a far bigger driver of stock prices than political news. Nevertheless, when you start mixing political uncertainty with economic uncertainty, it can be a recipe for higher volatility.

Speaking of rates, given the political noise, Fed uncertainty, and concerns over an impending recession, how is the high yield bond market reacting? Keep in mind, high yield bonds are riskier assets than government bonds, but generally not as risky as stocks. They make for interesting indicators of investor concern.

Lately, HYG has been holding strong above $87, near its 52-week highs. Recent volatility and economic concerns don’t seem to be impacting HYG investors just yet (see chart). 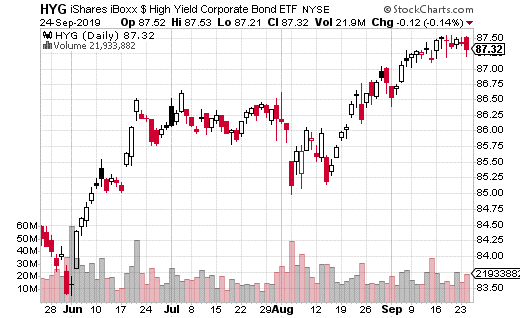 So, what do the options say?

Well, at least one very large trader also appears to be quite bullish on HYG. This trader purchased 10,000 HYG 87 calls expiring in December for 81¢ per option. Because the stock was at $87.33, these options are considered in-the-money.

Buying in-the-money options is a bullish play on an underlying asset. Although it’s a safer play from a probability standpoint than buying out-of-the-money options, the trader also has to spend a lot more on premium.

In this case, the trader is spending $810,000 in premium to purchase these calls. The breakeven point is $87.81, while max loss is the total premium paid if HYG closes below $87 at expiration. The position can generate $1 million in profit per dollar above the breakeven point.

While we don’t know for certain what the goal of this trader is, it certainly appears to be a bullish trade on high yield bonds. Perhaps the call buyer feels there’s more opportunity in high yield bonds than stocks. Or maybe the trader feels government bonds have run their course and HYG has more upside. Regardless, this is an easy trade to make yourself if you are bullish on this asset class.