Stocks Fail to Go Over the Ledge

It’s a nervous market that refuses to take a direction. So, you shouldn’t either, writes Jeff Greenblatt.

Markets don’t have great readings for the low. We have one good one which I’m showing you here. The low in the NQ last Thursday morning is an 81% retracement in 80 bars on a 180-minute chart (see below). The Dow Jones futures (YM) and E-mini S&P (ES) do not have readings this strong. But the YM and ES has excellent readings on the breakdown back on Oct. 1. In terms of the YM they aren’t even close to retesting it yet. So, what has happened lately for the intraday charts as represented by the NQ is a 61% retracement of the high and now a 60% retracement of the low. 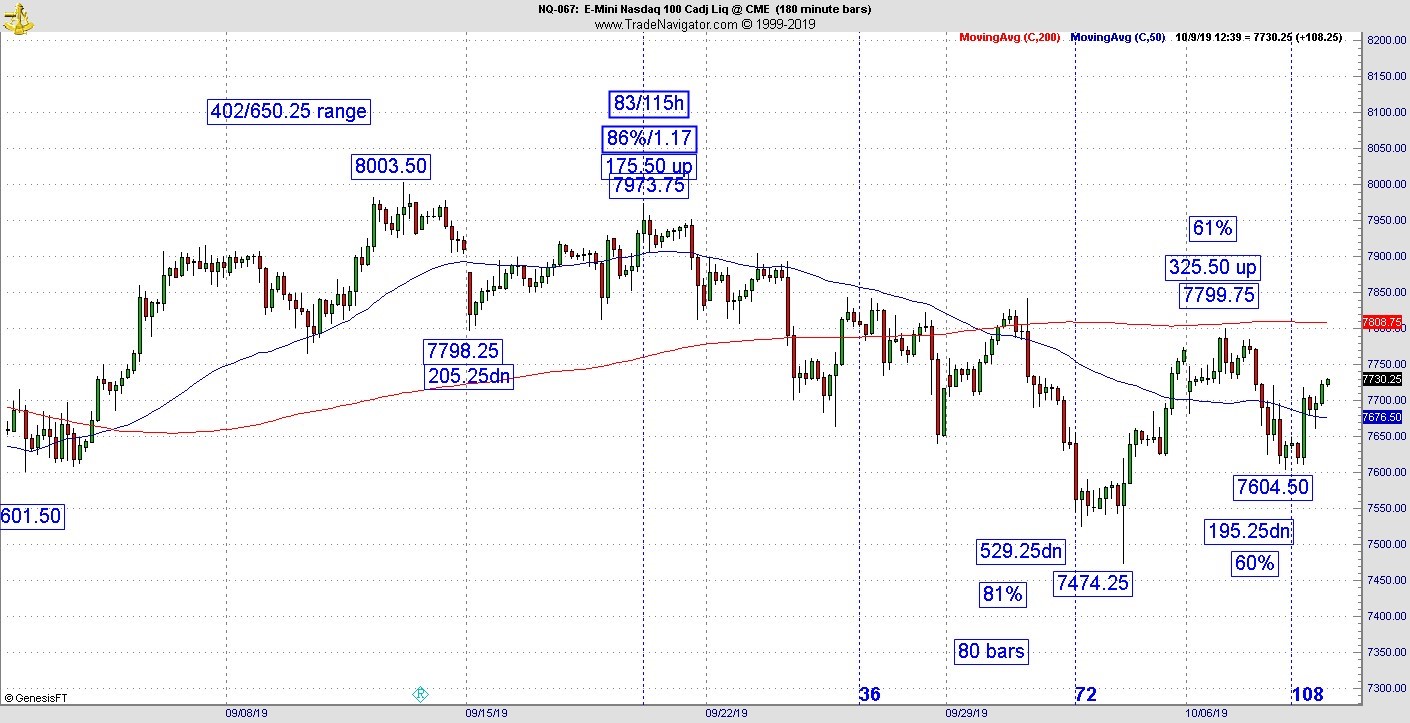 I spoke to a friend this morning who bemoaned the fact this is an incredibly difficult market to trade. I agreed and disagreed. This is a market that take three steps forward and goes two steps back in both directions. Its frustrating to both bulls and bears. Want to go long for a sustained move to the upside? There are days where that seems like a good idea. How about lining up with the bears for a major breakdown? On other days that’s equally good.

Neither are working right now. Let’s talk about psychology for a minute. By now you know all about the NBA China controversy. It’s an extremely sensitive issue, which will challenge the best in the diplomatic community. Is that fair? Markets were upset by that on Tuesday. By Wednesday markets were up again based on the hope there will at least be a partial trade deal. Did they already forget what happened the day before? I could get into the money vs. human rights issues going on with the Chinese. But I’m trying to help you successfully get around and navigate through extremely rough seas. Last week I told you a storm was coming. Right now, it’s a different type of storm. These are extremely rough seas because both bulls and bears are getting frustrated.

If you come to the market and decide to take a long or short position based on what you think is your spine of steel, odds are the market will break you. Right now, its not that kind of a market. We are having to navigate through once in a lifetime issues. Let’s talk about three of them. Hong Kong, trade wars and impeachment. They are all related.

Many thought Hong Kong would be rectified by now due to the 70th anniversary of the Chinese revolution. It has not. I didn’t think there would be a happy ending and still don’t. The NBA issue is completely unanticipated and is an unintended consequence of an angry, bearish mass crowd psychology. That leads us to the trade wars. Its hard to imagine this President making a deal with the Chinese as they are thinking about a boycott of NBA related issues, which has to be in the billions of dollars. Its even harder to think of the Chinese doing a trade deal with this President as he is under the black cloud of impeachment. I’ve thought all along the Chinese intend to run out the clock to make a more favorable deal with whomever comes after President Trump.  How is this manifesting? One day the market is down due to extreme pessimism a trade deal won’t happen. The next day the slop of hope is activated just on the idea the negotiators will start talking again.

I think it stands to benefit both the Chinese and Americans to talk about a deal, not make one because it continues to prop up the markets. For months, they hyped the idea of a deal. Now they are hyping the idea of a partial deal because nobody thinks a real long-lasting deal is possible.

On the other side of the coin the Federal Reserve announced they will continue their Repo actions until Nov. 4. What we are hearing is the injection of funds on a nightly basis helps the banks keep their reserve ratios up, which artificially keeps interest rates down which allows them to lend and keep asset prices up.

Think about this, a few weeks ago the overnight borrowing rate hit 10%. Had the Fed done nothing markets would’ve crashed already. This time, instead of waiting for the disaster to hit the Fed got in front of the problem in the hopes of cutting it off at the pass.

So, what does that mean to us? It’s really a market that wants to go lower but propped up by the injection of billions nightly. It’s really a market that wants to rally but can’t because the economy isn’t healthy enough to sustain a major rally. Ask yourself this question. If the economy were so healthy, would the Fed need to inject so many billions on a nightly basis? So, this is what we get.

Right now, your best strategy is a short-term strategy. Since Labor Day, markets have flashed both buy and sell signals. Currently, they are on a near term buy signal. To succeed right now you’ll have to shorten your horizons and be glad to take something out of the market on a regular basis. Take your favorite instrument. There’s nothing wrong with getting in and out of the market. What prevents that? It’s the emotional side which always betrays traders at the worst possible moment. The market tricks you into thinking it’s getting ready to go (in either direction) but only ends up frustrating. Its also important to keep in mind the most bearish season of the year for the stock market has only three more weeks to run.

By November the sell in May and go away season comes to an end. The good news is this trendless pattern could come to an end in just a few short weeks. More important than making money in the markets is capital preservation. For some of you this could be the best near-term solution. For the more aggressive of you, this could be a trading paradise if you have the right perspective in terms of taking small chunks out of the market without overstaying your welcome.

If the market happens to survive both September and October, it will only be at that time you can start thinking about a sustainable move to the upside. That being said, risk remains high for a black swan type event.