Homebuilders may be the sector to watch, writes Joe Duarte.

Thanksgiving is past but I am thankful that trading algos have a short memory as the stock market spent the holiday week walking on eggshells resulting from the interplay between the Federal Reserve, the bond market and the U.S.-China over trade.

Make no mistake about it, the elephant in the room remains the U.S.-China trade war and last week’s Chinese fire drill was a perfect example. Indeed, stocks were starting to rebound after a short-term pullback when President Trump, midweek, signed a House resolution condemning the Hong Kong situation. Of course, China got tense about it, and although nothing concrete has come of it yet, the algos didn’t like it so they sold the futures and stocks followed. This was worsened by thin markets due to the holiday with prices rolling over and the week closed on a sour note.

But that was last week, when we were stuck in a China headline influenced macro environment, which may or may not be resolved in the near future. So, we are headed to a new week, and what we know from experience is that algos are reactive and easily amused entities. Moreover since headlines are likely to be plentiful this week –multiple global PMIs, regional U.S. business surveys, mortgage data, and private and government employment reports- the odds favor that unless the economy is imploding as we speak, something that robot consider positive will come along and distract them to the point where they buy stocks again, unless, of course they get thrown off by the Trump-Rocky portrait.

Homebuilders Could Have a Long-Term Upswing if Bonds Behave

Algos aside, one thing to have been very thankful for during last week’s Thanksgiving holiday was the relatively quiet action in the bond market as yields remained below 1.8% yield on the U.S. 10-year note (TNX). Certainly bond yields are well off their recent lows near 1.5% and although the trend is leaning toward higher rates, bond traders didn’t seem to be in a hurry to take another stab at moving yields above the 1.9% area last week. 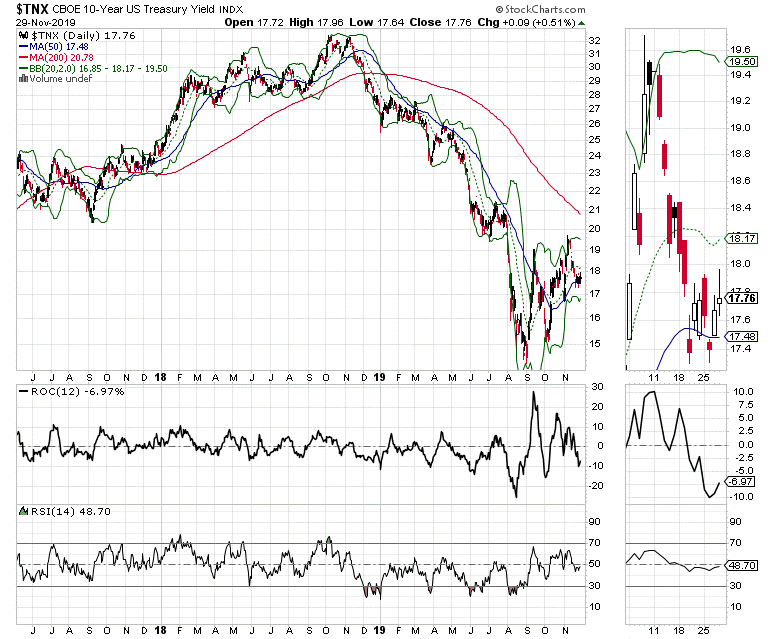 This general calm in the Treasury market was helpful to the housing sector, where the Markets-Economy-Life complex adaptive ecosystem (MEL) has a deep footprint given the fact that market interest rates are the benchmark for the trend in mortgage rates and buying a house is one of life’s biggest decisions. Indeed, last week’s mortgage data showed a flattening out of refinancing activity while pending home sales were slightly lower than expected as rates have risen lately but remain lower than last year.

Unfortunately, that pattern changed on the week ending Nov. 22. Certainly, New York Stock Exchange Advance/decline line is not signaling a reversal. However, and here is where it gets interesting, sales for new homes continued to climb, while the median home price is falling at a time when there is high demand and low supply for homes. So when we put all the pieces together, a fairly positive tale emerges regarding the homebuilder stocks, which recently pulled back when bond yields started to rise, but have stabilized and may be poised to start a new rally barring a new bond market temper tantrum.

Accordingly, two reliable housing stocks, DR Horton (DHI) and KB Home (KBH) seem to be righting their respective ships (see charts below). DHI is the largest U.S. homebuilder, and thus has the scale to continue to operate with less stress than its competitors. It has been paying down debt and expanding its market share, which remains a major portion of its business plan. Meanwhile KBH has developed into an excellent niche player which capitalizes on location, amenities, and catering to first time home buyers and empty nesters, the two largest home buyer groups. 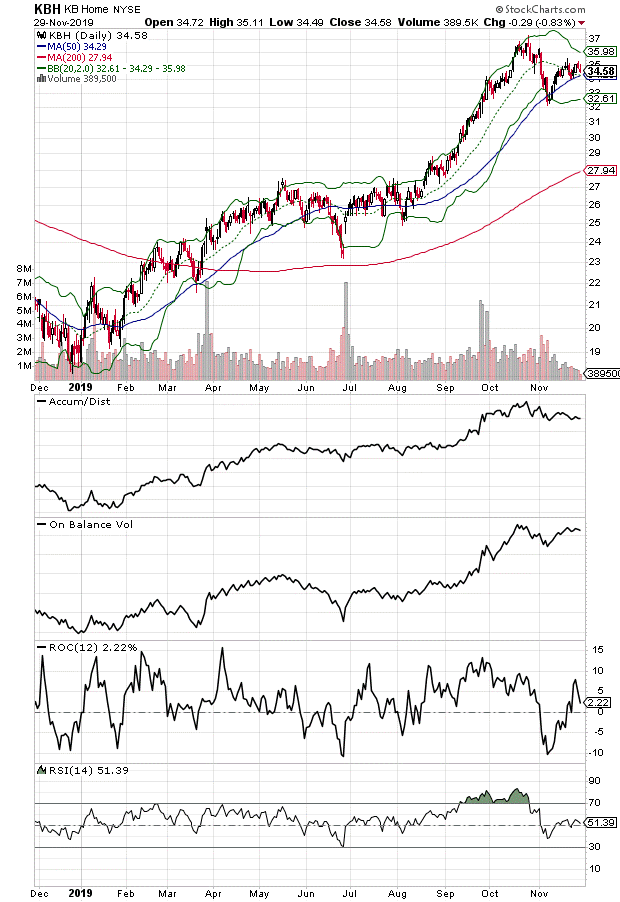 Both companies are describing a market in which they have no shortage of buyers and in which they continue to buy properties and steadily deploy development plans. But here’s the catch, neither of them has any real pricing power, which has resulted in the need to use promotions to close sales. So far, the strategy has worked as both companies have delivered very good earnings news of late, albeit with mixed revenues, while providing positive earnings guidance.

Furthermore we are experiencing a generational shift where the migration of Americans from high tax to low tax states, a point illustrated by a recent poll from the Garden State Initiative and Fairleigh-Dickinson University, which concluded that more than 40% of New Jersey’s population is planning on leaving the state over the next five years. It seems that this is an intangible factor that may make the difference in the top and bottom lines of homebuilders as it continues.

Familiar readers will remember my noting the large and ongoing number of out of state license plates in Texas. Now there is census data showing that Texas is the most popular destination for those leaving California. Most interesting is the fact that startups are starting to leave the Bay Area and that Fortune 500 companies, medical supply giant McKesson (MCK), Coremark Holdings (CORE) and now Charles Schwab have moved to the Dallas area joining JP Morgan Chase (JPM) whose massive relocation to Plano, Texas is ongoing.

My point is not political. It’s just a fact that if more people are moving to new areas housing availability will have to be increased in those locations. This is evident in Dallas where apartment building remains robust and where new housing developments as well as tearing down of older homes to build new ones seems to be growing phenomenon.

Thus, even if some areas of the country may face decreasing demand, which is actually not evident yet, others will clearly pick up the slack. In other words, the demographics and the balance of supply and demand are on the sides of the homebuilders, all of which means that the potential negatives – interest rates and the general state of the economy- are outside their control and as long as those remain reasonable, the homebuilders are likely to keep on doing what seems to be fairly good business. Accordingly, it may make sense to ease back into the housing sector while keeping a very close eye on the bond market and the employment picture. 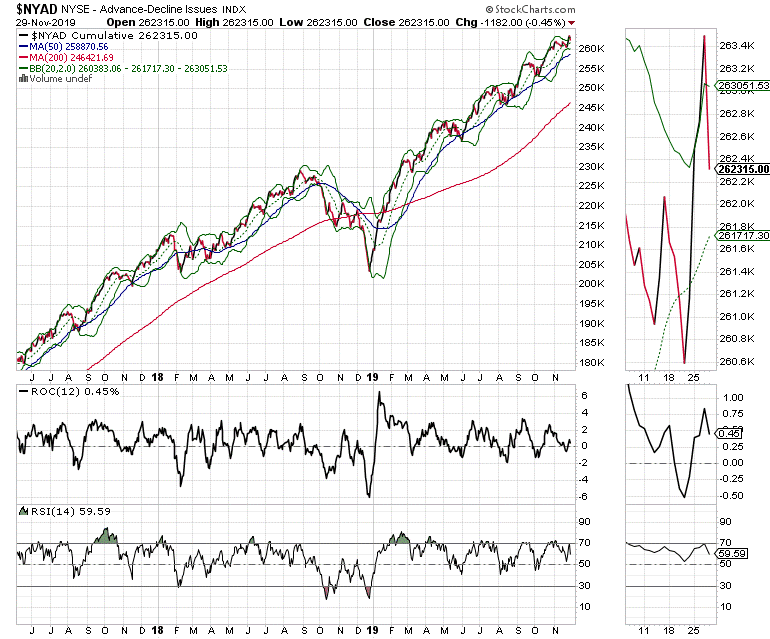 The S&P 500 (SPX) and the Nasdaq 100 (NDX) indexes rolled over at the end of the week, but also delivered intraweek highs confirming the general positive tone of the AD line. 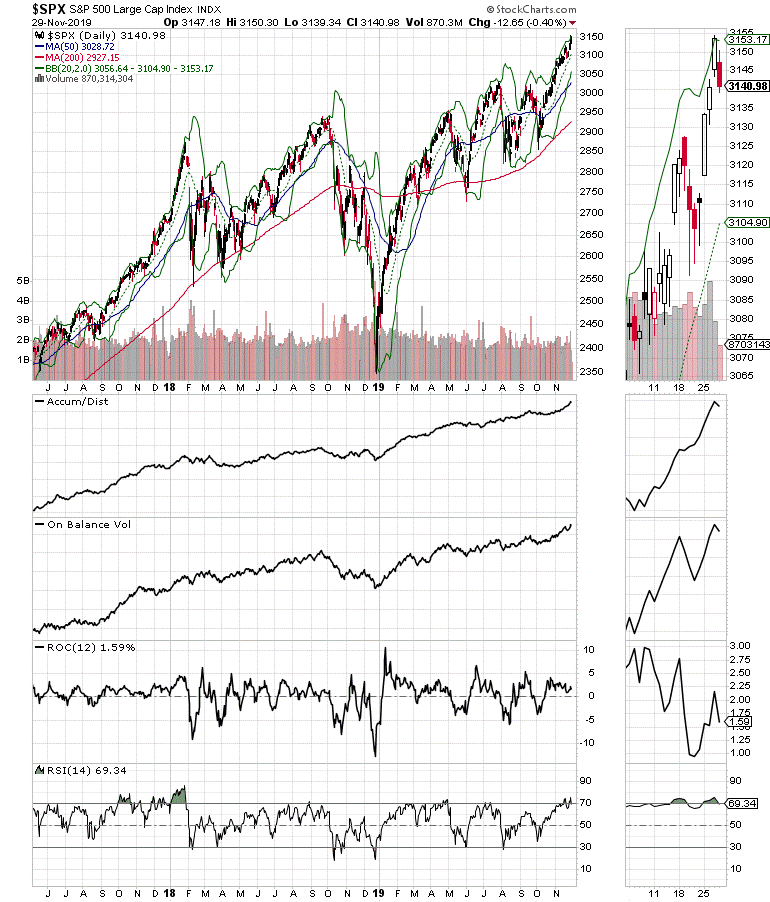 Also, a positive is the fact that small and midcap stocks have also been moving steadily higher suggesting that the rally still has some legs. 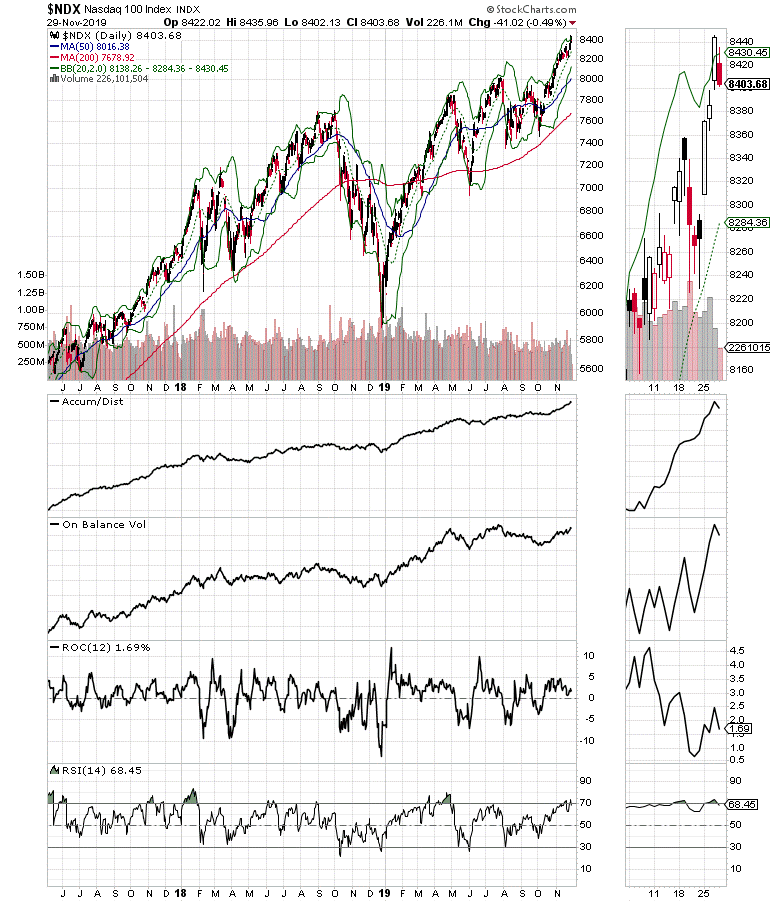 So, for now, if interest rates remain stable and there is no major blow up in the U.S.-China trade talks, the bulls get the benefit of the doubt.

Patience and Selectivity Remain the Key

The odds of a year-end rally remain better than even but the difficulty in making money will be in picking which stocks are likely to rise. Moreover, the recent rotation away from tech and dividend stocks remains difficult to analyze, as there are a lot of false breakouts on a regular basis.

Thus, it makes sense to avoid the broad stroke approach, such as using sector ETFs and to run large screens of stocks while picking the ones that seem to be the strongest. Meanwhile, keeping a short leash on them with sell stops in the five percent area and keeping a small hedge on may also be helpful.

I have added seven new stocks to my subscriber portfolio which should move nicely higher in a year-end rally. For a FREE trial subscription check out the link below. Joe Duarte has been an active trader and widely recognized stock market analyst since 1987. He is author of Trading Options for Dummies, and The Everything Guide to Investing in your 20s & 30s at Amazon. To receive Joe’s exclusive stock, option, and ETF recommendations, in your mailbox every week visit here.