The President could be encouraging investors at the wrong time, writes Jeff Greenblatt.

Markets came back from the holiday break in a sour mood. Apple (AAPL) reported they wouldn’t be able to hit revenue projections due to the Coronavirus. They said they won’t meet their own guidance in March due to weak demand in China. They said the problem is a “slower return to normal conditions than we anticipated,” according to several sources. This is exactly in line with the supply chain interruptions I’ve been warning about for several weeks.

Apple stock gapped down on the news and other stocks also sensitive to the virus were also hit but perhaps not as dramatically. By Wednesday, markets were already recovering. What is it going to take? Aside from news on the virus, here’s the most noteworthy financial news of the week: Last Friday the Trump Administration floated the idea that households earning up to $200,000 could invest $10,000 on a tax-free basis in stocks, which would be over and above the amount of tax-free money people can already invest in their 401k plans.

One of my points of contention with President Trump is his fixation on the stock market. The problem is markets don’t always go up. If you are going to take the credit, you will also get pinned with the blame when it comes back down. Most Presidents realize this and keep the market results at an arm’s length.

Not Mr. Trump, who encourage investors to jump in on Friday. Some pundits credited the leak of this trial balloon as stalling the selling in Friday’s session.

There are two problems with this proposal. First of all, politicians usually come up with these kinds of schemes late in the game and smart traders tend to look at it as a contrary indicator. When the political class wants the public to invest in the market, it could be an indication of a pending top. That doesn’t mean the market will top tomorrow, it means it could top for good this year. The four-year cycle has peaked and could rollover to manifest a hard low by 2022. Recall my 2018-19 discussion about the impending peak in the four-year cycle that was supposed to hit around June 2019. The only reason the market is staying up is the easy money policies of the Federal Reserve. If not for the Repo actions, its highly likely there would’ve been panic selling back in September.

Given the inverse psychology, which is a regular feature of the market, let’s assume there is a pending top in the stock market prior to or just after the election. Such a proposal to get the public invested in the market might be a good strategy for President Trump so he could keep stock prices elevated until the election. For the public, not so much. We don’t know if there is an impending top. What we do know is the market is in a secular bull market that started in 2009. The biggest bear phase was in 2011. Let’s just say there were two middling corrections in 2015 and 2018. The correction in 2018 lasted roughly 12 weeks. The 2015 correction lasted about eight months. Whatever the case, why don’t politicians offer these proposals when the market is at the bottom?

You know the answer to that but isn’t it irresponsible to coax people into buying stocks when the stock market is trading at or near all-time highs? Putting it another way, would you recommend your best friend buy the market when its sitting at an all-time high as the SPX is today?

What could end up happening is the loss of principle could completely wipe out any tax considerations given the risk in the market having black swan issues like the Coronavirus hanging like a massive cloud. The biggest problem is most of the public has no clue how the market works. They’d probably participate but would be the exact people who get hurt the most.

We’ve been talking about the potential for oil to find the low. It has done so. A quick look shows WTI crude oil has taken out first resistance and a decent Kairos reading in the process at 65 bars up at $52.67 (see chart below). It is now headed to the next resistance level near $54.63. 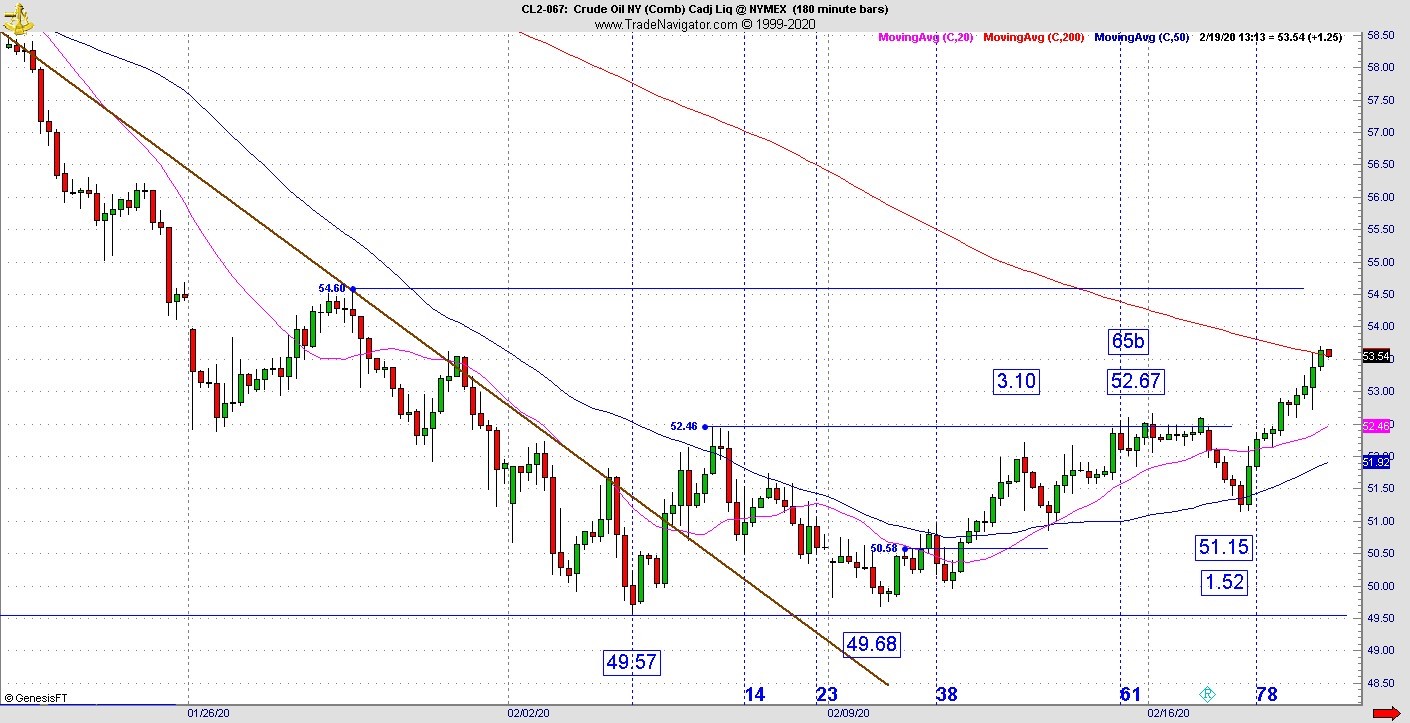 It has been reported that Hyundai had to stop current production because they are having trouble getting parts out of China. It takes roughly five to six weeks for those huge container ships to cross the Pacific Ocean. It will be interesting to see when the first real interruption of the supply chain manifests. That’s all the more reason to dislike President Trump’s plan to keep the market inflated.

The stock of Regeneron Pharmaceuticals (REGN) has performed particularly well in 2020, rising nearly...

Which Stocks will Recover First?
1 hour ago

Volatility continues to grow spike in GBP as it moves inversely with dollar, reports Joe Perry....