Commercial traders in the British pound (GBP) continue to fade any hopes of Brexit success. Commercial short selling has now forced the market back below the long-term moving averages. Furthermore, the speculative COT Ratio reveals this is the most bullish they’ve been since April of 2018 when they were also long 1.67:1. In short, there’s little reason to believe the market isn’t heading back down towards $1.25 to the U.S. Dollar.

Shifting to the grain markets, we want to look specifically at soybean meal. The continued grind lower in soybean meal while beans have moved higher over the last month has helped to restore some balance within the soybean complex. Commercial traders have begun purchasing soybean meal at a pace not seen since July of 2017. Additionally, the commercial position is now the longest it has been since late June of 2017 (see table below). The ferocity of the commercial purchases has set both a 52-week net high and is more than two standard deviations beyond their expected activity. Officially, we have not triggered a buy signal, however, we’re watching the soybean meal closely for signs of a reversal, higher. Stay tuned. 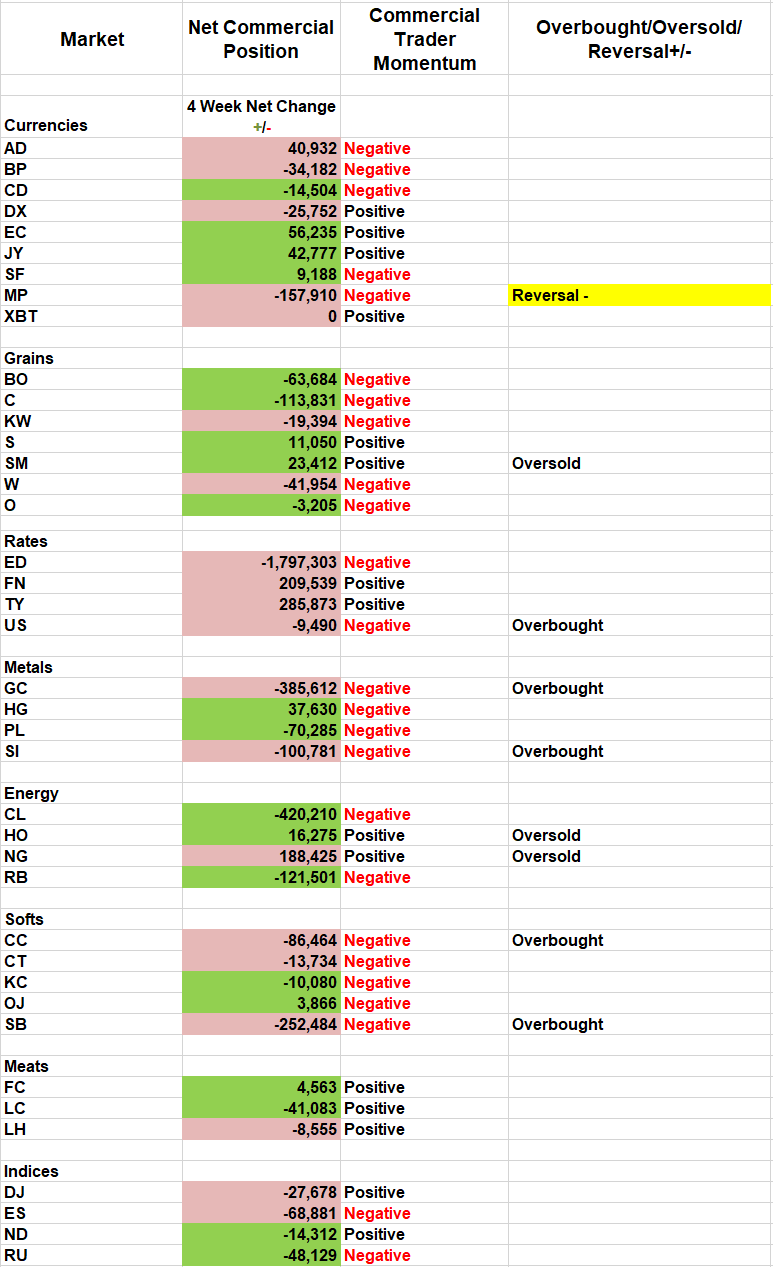 We also want to touch on the wheat market. Speculators have come in to buy CBOT wheat at an extremely rapid pace. Speculative purchases of more than 20k new long positions over the last week have pushed their COT Ratio to its highest level since August of 2018. The market action then is similar to the current setup. In both cases, wheat made a new high in the previous month. Then, a small retreat and consolidation brought in a flush of new speculative purchases looking for a run at further highs. The market took more than six months to recover from the 2018 episode as the speculators were washed out, and the market reset itself.

Remember, most breakouts fail. Commercial traders on the sell-side have matched the speculative bid contract for contract (see table above). We believe that the market will fall as speculators are forced to sell their long positions, rather than rallying due to commercial short covering.

The metal markets have been bustling, as well. Both speculators and commercial traders set new records long and short, respectively, in the gold market, this past week. Speculators are now net long more than 350k gold contracts at a ratio of 7.5:1, longs versus shorts. Now, add in the fact that gold and the U.S. dollar have been positively correlated for at least the last year, and we have a genuinely confounding situation. Will a dollar falter add rocket fuel to the gold market? As someone who’s never really understood the value of gold, we’ll trade this market like we trade spikes in the energy markets as a short-selling opportunity. Remember, we’re not investing; we’re trading.

Interestingly, the silver market hasn’t kept pace with gold. While the current readings are relatively similar, silver’s volume and open interest have yet to climb in step with its prices. If the market is to be believed, the May contract should breach $20 per ounce this coming week.

View past letters on our site for free. Subscribe to follow along and receive stop levels plus additional commentary. Here is what Andy had to say about seasonality and the COT Report at the TradersEXPO New York. Visit Andy Waldock Trading to learn more. Register and see our daily and weekly signals archive for entries and stop loss levels sent to our subscribers.