A Hedged ETF for Exposure to Japan

The WisdomTree Japan Hedged Equity Fund (DXJ) is an exchange-traded fund that tracks an exporter-focused, dividend-weighted index of Japanese stocks that are hedged to protect against currency fluctuations between the U.S. dollar and the Japanese yen, observes ETF expect Jim Woods, editor of The Deep Woods.

DXJ has a specific investment thesis, with an “Abenomics,” dividend-focused portfolio that is positioned to gain from increased economic activity in Japan amid its weakening currency. The ETF selects export-oriented, dividend-paying Japanese firms, weights them by dividends and then hedges its yen exposure.

The fund was not always currency-hedged or export-oriented. At launch, DXJ tracked a dividend-weighted index, without adding a currency hedge until 2010 and shifting the portfolio toward exporters in 2012. Its dividend-oriented selection and weighting produce one of the segment’s highest yields and a tilt toward large-caps.

Although the fund’s fee is not cheap, it is reasonable given the complexity of the portfolio. However, wobbly tracking stats point to real-world holding costs that are often significantly higher than the fee.

It is worth noting that the fund has made capital gains distributions in the past -- a tax hit for investors. Still, DXJ is one of the most-liquid funds in the segment and is easy to trade for both small and large investors. 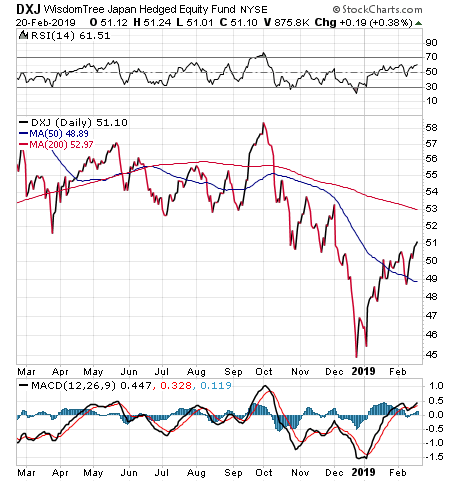 The fund currently has $3.5 billion in net assets, $107.13 million average daily volume and an average spread of 0.02%. It also has an expense ratio of 0.48%, which means it is slightly more expensive to hold in comparison to other ETFs.

Sustained monetary-easing in Japan has kept the yen at weakened levels. However, since Japan is an export-driven economy, this likely would propel stock values up. By hedging exposure to the yen, the WisdomTree Japan Hedged Equity Fund provides return potential from Japanese equities in a depressed yen environment.