Fortune Telling Is Providing an Opportunity in Biotech

The iShares NASDAQ Biotechnology Index ETF (IBB) has a 5% pullback, providing an opportunity to enter a market still up over 20% for the year. As long as IBB trades above $306.03, consider new long positions when IBB weakens, suggests Landon Whaley of Focus Market Trader.

For the life of me, I can’t understand Wall Street’s obsession with forecasts. These guys will forecast anything, like prop bets for the Super Bowl. It’s out of control! Regular readers know how I feel about forecasts, but for the uninitiated, Wall Street forecasts are the equivalent of fortune telling: a lot of pomp and circumstance but absolutely zero real value.

Wall Street has two favorite fortune telling games. The first happens each January, when strategists forecast where the S&P 500 (SPX) is going to finish the year. In the second game, analysts forecast which companies will be winners and which will be dogs in the coming year.

Like Mike Tyson said, “Everyone has a plan ‘til they get punched in the mouth.” When the S&P closes at brand new all-time highs once every five trading days, like here in 2017, these already worthless forecasts get shredded like a document in the final hours at Enron.

You know it’s the start of a new trading year when strategists from Wall Street and foreign banks tell you precisely where the S&P 500 will end the year. There is zero informational value in these price forecasts, and frankly, I don’t even see the entertainment value.

I’ve never seen a single strategist for a major bank or Wall Street firm forecast a decline for the S&P. Not one! This year was no different, with eighteen strategists channeling their inner Miss Cleo and each one predicting the S&P would gain ground this year. Shocker!

These strategists’ upside profit targets ranged from a “whimper” at $2,275 to a “party like it’s 1999” forecast of $2,500. Hindsight tells us that all of these fortune tellers underestimated just how high accelerating U.S. growth would push the S&P.

The S&P is now 240 basis points above even the most optimistic price target!

If you’re using year-end forecasts from January as part of your process, may I suggest a tarot card reading?

At least that way, when you get The Wheel of Fortune card coupled with the Temperance card, you’ll know “you’re not far from harvesting the fruits of your labor and your endurance. You might be in for a bonus.” Ka-ching!

In addition to year-end price targets, Wall Street analysts love to forecast which stocks will outperform or underperform the broader market. To steal a line from Gordon Gekko, “They're analysts, they don't know preferred stock from livestock.”

Last December, The Economist conducted a study of all the equity analyst ratings for the 500 companies in the S&P 500 index. The study found that 49% of all the ratings were "buy/outperform,” 45% were "hold/neutral,” and the final 6% were ratings of "sell/underperform."

Despite these analysts’ insights, 50% of the stocks in the S&P underperformed the index last year and 30% delivered outright negative returns. Rather than just 6% of the S&P 500 universe deserving a “sell” or “underperform” rating, a full 80% of the companies fit these two descriptions. But what’s a 74% forecasting error between friends?

This study covers just one year, but it’s by no means cherry-picking. It simply highlights that analysts don’t have a clue which companies will perform well and which ones should have been left on your portfolio’s bench.

If you’re using analysts’ ratings as part of your process, may I suggest you read your horoscope instead?

For instance, this week if you’re a Virgo, “Aspects are expanding your opportunities at work and paving the way for a raise, promotion, or both. Even on a bad day, you're pretty lucky. These days money is coming so fast and furious that you may need a new plan for saving and investing.” Boo-yah!

Being a consistently successful investor requires that you better understand what is happening right now with regards to the trends in economic and financial market data. Period.

Right now, the primary catalyst driving asset prices is the three-headed US hydra, which I discuss in detail here. The executive summary is when U.S. growth is accelerating, alongside a rising U.S. dollar and U.S. yields, the investing playbook is straightforward. You want to be involved in the go-go growth sectors of the U.S. equity market like technology and finance.  On the flipside, you want to avoid gold, bonds and their equity cousins (utilities and REITs).

One of the go-go growth sectors that historically performs very well in a 3-headed US hydra environment is biotech. The iShares NASDAQ Biotechnology Index ETF (IBB) has just experienced a 5% pullback, providing us with an opportunity to enter a market that is still up over 20% for the year. 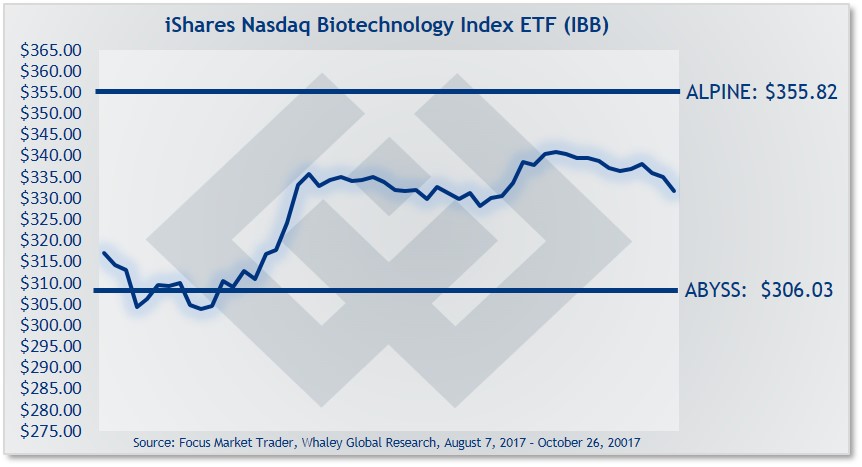 As long as IBB trades above $306.03, then you can consider new long positions when IBB shows weakness. Depending on your entry price and how much room you want this trade idea to move, use a risk price between $319.30 and $306.03

If this long trade moves in your favor, then you could consider using the area between $342.29 and $355.82 as your spot to take profits on some or all your position

Jobs Beat Good for Stocks, FTSE Breaks Out
2 hours ago

The American Dream is Alive and Well
2 hours ago

What’s Dangerous About the Stock Market Right Now?
2 hours ago

The Best Stocks with Monthly Dividends: Realty Income
3 hours ago