In my 30 years as a trader, I’ve never seen a market like this. If the bots remain faithful to their programs, we are still likely to see higher stock prices over the next few weeks to months. There is no shortage of things to worry about, says Dr. Joe Duarte Sunday.

Certainly, one can parse the true meaning of Ms. Khan’s famous lines, but it’s hard to argue with the universality of the statement she made and whether anyone can relate to that feeling of exhaustion after a hard day’s work. Indeed, her words are especially prescient at the moment when we are trading in the longest bull market in history during what may prove to be the most remarkable political period of the past few centuries.

I can’t sing like Ms. Khan once did, but after a long day of staring at the bots doing their impression of Pacman gobbling up a nickel here and a dime there on my trading screen, I can definitely identify with her general feeling of exhaustion. Of course, the general market trend remains up, which is what keeps me and everyone else coming back for more.

Yet, at the end of every trading day, I wonder how much more drama this stock market can take given the political gyrations, the natural disasters, the actions of the Federal Reserve and what may lie ahead, especially as the midterm election nears.

Perhaps the most ironic aspect of the daily grind is the faithfulness of the robot traders to that old Wall Street adage which simply says: “bull markets climb walls of worry.”

And while I hate to add to the drama, in my 30 years as a trader, I’ve never seen a wall of worry or a bull market that can compare to what we are living through at the moment.

A few weeks ago, I noted the NYAD was likely setting up for a breakout to the up side. And so far, the most accurate indicator since the election of Donald Trump has been right on the money with yet another new high which has been confirmed by a new high on the S&P 500 (SPX) as I note further below.

What this means, at least in the short to intermediate term is that the bull market still has more room to rise until proven otherwise as the wall of worry continues to spur the algorithms.

The unthinkable is now the mundane as the U.S. stock market continues its bullish run. Witness the new highs in the S&P 500 and the Nasdaq 100 (NDX) confirmed by the NYSE Advance Decline line. 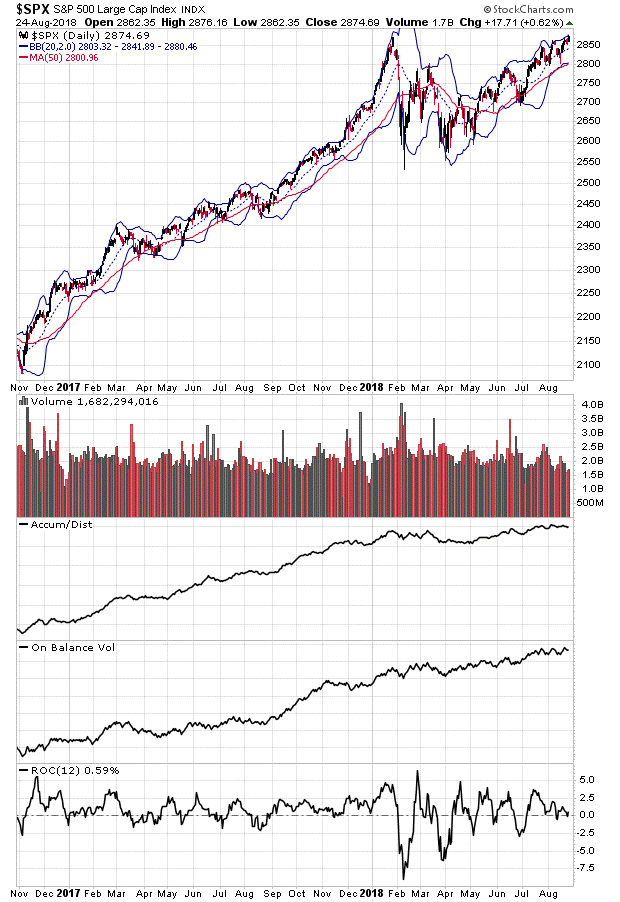 As a result of these technical developments it’s clear this is a spectacular momentum run. And while all momentum runs end badly, any trader worth his salt knows that to miss a momentum run is to miss a big trip to the bank as long as greed doesn’t get the best of him.

All the same, it’s hard to ignore that volume remains sluggish in this market and that eventually this will likely be the market’s downfall. But for now, it’s not a good idea to fight the general up trend in the market.

Hang on for the ride

I’m tired but I can’t take my eyes off the screen. Indeed, the more the pundits and experts call for the decline of Western civilization, World War III, and a stock market crash, the wall of worry rocks on and stock prices just keep moving higher. And since that’s what we’ve got, that’s what we trade.

Still, since nothing stays the same forever, I suspect that someday we’ll look back and wonder how this whole thing happened. But fret not.

There are certain assurances in this world. One is that Michael Lewis will ferret it all out. And those of us who survive the eventual and historic decline in stock prices which will follow this crazy bull market will be able to learn how it was all done by reading his next “Liar’s Poker,” “Money Ball,” “The Big Short,” “Boomerang” or “Flash Boys” style book as we wait for the fallout from the sequence of events that will end this bull market to clear.

Until then, stay awake. Trade in small lots. Hedge all bets. Use options when possible. And don’t lose any sleep. You’ll need to be well rested when the brown stuff finally starts flying around and piling up everywhere.

Don’t touch that dial. There is so much more to come.

Joe Duarte is an active trader and author of Trading Options for Dummies , now in its third edition and The Everything Investing in your 20s and 30s. To receive Joe’s exclusive stock, option, and ETF recommendations, including trade results, visit www.joeduarteinthemoneyoptions.com.

What’s the Big Deal with Bubbles?
13 hours ago

Many people are talking about an expanding market bubble, but bubbles can persist, so it’s bes...

Ben Reynolds chose AT&T (T) as his Top Pick for conservative investors in 2019; the stock is up ...