Volatility tends to shrink as we enter the summer. Jay Soloff has spotted an interesting short volatility play for the summer.

As summer quickly approaches, it seems there are many traders who feel volatility is going to vanish in the coming months.  It’s not unusual for volatility to diminish in the summer.  However, there appears to be even more bets than usual that the market is going to remain calm.

Market volatility these days feels a lot like it did in 2017.  It was one of the least volatile years on record.  Will 2019 be a repeat of 2017?  The Mueller Report is now out in the open (mostly) and the Fed has essentially pledged to keep interest rates low.  It certainly doesn’t seem like there’s a lot of volatility-spiking events on the horizon.

Still, you never quite know with volatility.  A couple poor earnings results combined with some negative economic data or a surprise outcome in US-China trade negotiations could change the market’s tune in a hurry.  Once again though, it seems like an unlikely scenario at this point.

Probably the most popular way to trade volatility is through one of the exchange traded notes (ETN) tracking the Cboe Volatility Index (VIX), such as the iPath S&P 500 VIX Short-Term Futures ETN (VXXB). VXXB tracks the first two futures months of the VIX, so it is a very good gauge of short-term volatility.  As an ETN, it trades like a stock, making it easy for anyone with a brokerage account to trade.

Options on VXXB are also extremely active.  The average daily options volume for the ETN is over 100,000, but on busy days it can trade hundreds of thousands of contracts quite easily.  It’s a good example of a product traded actively by both institutional and retail traders.

Getting back to the volatility environment, a big trader is making a risk-controlled bet that VXXB will continue to plummet into the start of summer.  Specifically, the trader purchased the June 20-21 put spread with VXXB at $26.22.  That means the 21 put was purchased (for 29¢) while the 20 put was sold (for 12¢).  The total premium cost of the trade was 17¢.

So, you may be wondering, why do you trade a 1-strike differential spread?  And, why sell the 20 put in the first place, which only offsets the cost of the 21 put by 12¢?  Let’s do some math to help explain.

From a percentage standpoint, this trade can also generate nice profits.  If VXXB drops below $20 by expiration, the spread is worth 83¢ to the buyer.  That’s $1 million in profit or a 488% return.
You can see why a narrow spread can really pay off.  The buyer is only on the hook for 17¢ per option but can earn 83¢.  Now 17¢ times 12,000 spreads is still a lot of money.  However, the upside potential is quite large in comparison to the risk taken. 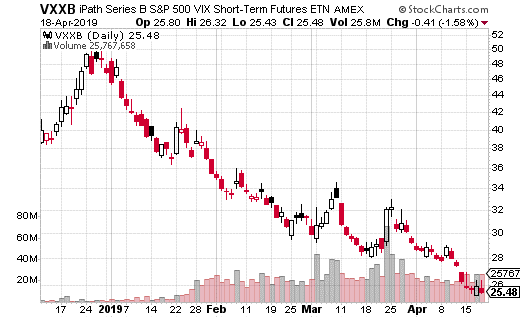 This is also quite an easy to trade to emulate if you believe volatility will continue on its downward path.  For 17¢ you get roughly a two-month trade that is low risk (due to the low cost) but still has high upside potential.  Volatility would need to basically vanish from the markets for this trade to work, but it certainly wouldn’t be the first time for the scenario to occur over the last few years, and he seasonal tendencies are working in your favor.