After a terrible May the S&P 500 Index is starting June off strong in response to comments by Federal Reserve Chairman Jerome Powell that he is open to lowering interest rates and that unconventional tools such as negative interest rates and quantitative easing remain on the table.

The bond markets are flashing a warning sign to the Fed in that 10-year Treasury note as yields fell below 13-week T-bill yields in May—a yield curve inversion that in the past preceded each of the past three recessions.  All is not lost, however.  One theory I heard from Tom Tzitzouris of Strategas Research is that yield curve inversions are warnings that the Federal Reserve is too tight, and that if the Fed heeds that warning in time a recession can be averted.

We will learn more about the state of the economic expansion, which will soon become the longest on record, with the May employment report that comes out this morning.   Preliminary indications from the ADP Employment Report of weak private sector job creation in May are worrisome.  Fortunately, it seems that Powell has been born again as an inflation dove, which could negate the intermediate-term (six- to 12-month) bearish implications of the yield curve inversion.  The markets will tell us what to expect economically.

Until this week, trade was the big market mover.  I like to watch the iShares China Large-Cap ETF (FXI) for clues about what the markets are predicting in the brewing U.S.-China trade war.  Indications are neutral for now, with the S&P 500 SPDR ETF (SPY) jumping in June while FXI stalled (see chart).

The market’s lack of enthusiasm for Chinese equities suggests that we are not yet out of the woods in terms of trade issues. 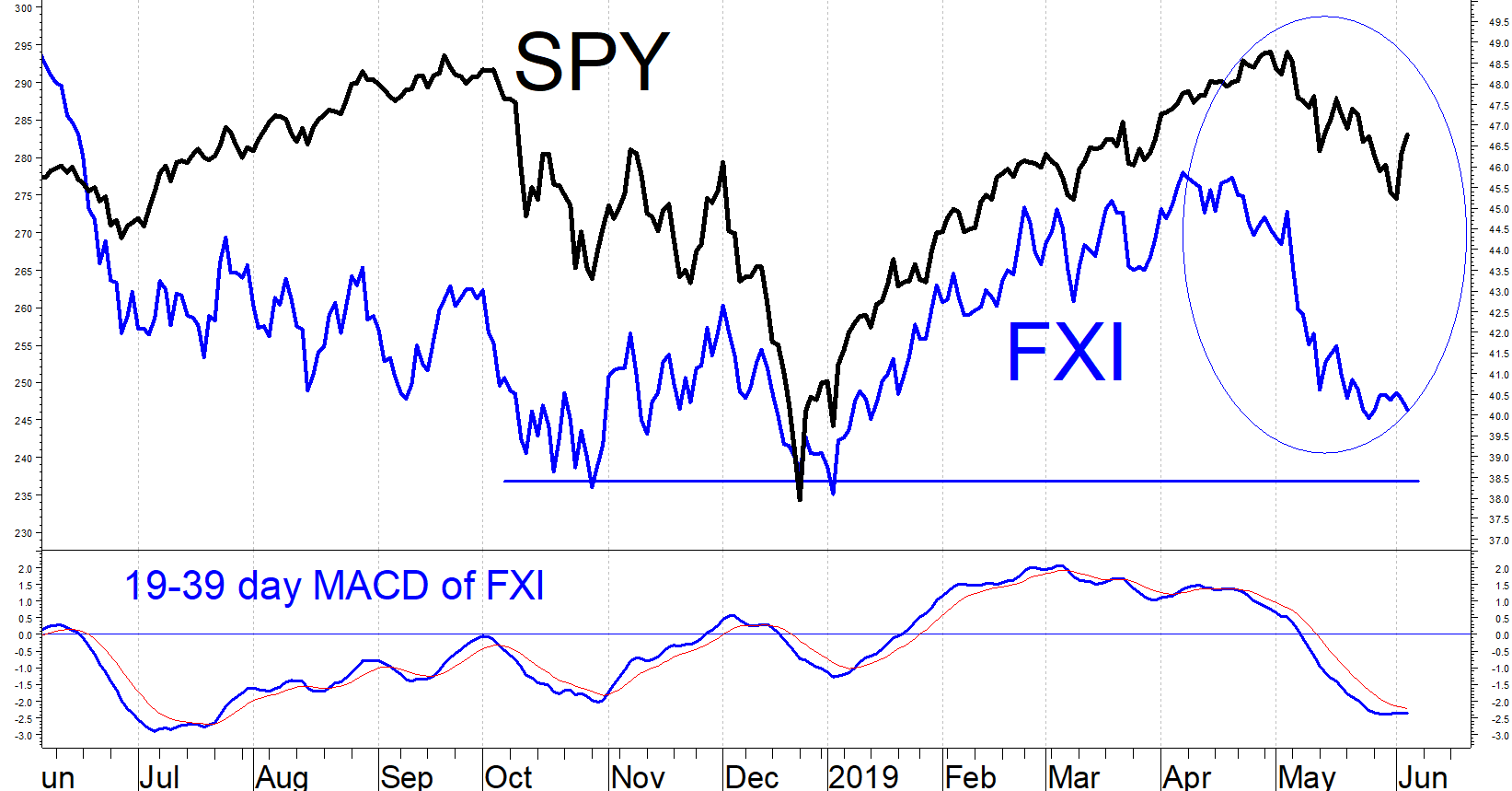 High yield bonds pulled back in May along with equities, with the Merrill Lynch High Yield Index down 1.3% last month.  The spread to Treasuries jumped from 3.7% to 4.6% during this decline—not as high as the 5.4% reached late in the fourth quarter of 2018, but higher than spreads have been most of the time since late 2016 (see chart below). 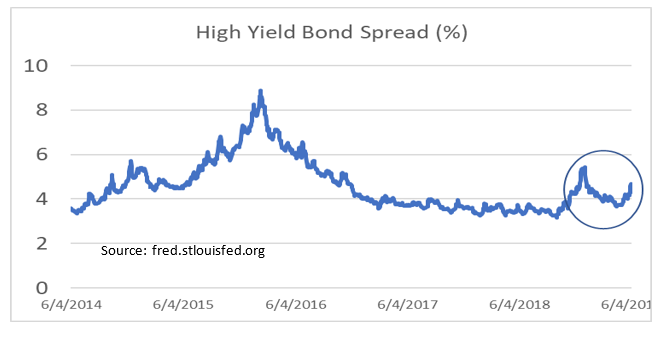 For now, high yield bond prices are holding on where they need to; the iShares iBoxx $ High Yield Corporate Bond ETF (HYG) has held above the 85 support level and its weekly MACD (price-only) remains above zero (see chart).  It is not clear whether high yield bond funds are headed lower or whether they have hit bottom.  However, either way, risk appears well contained. 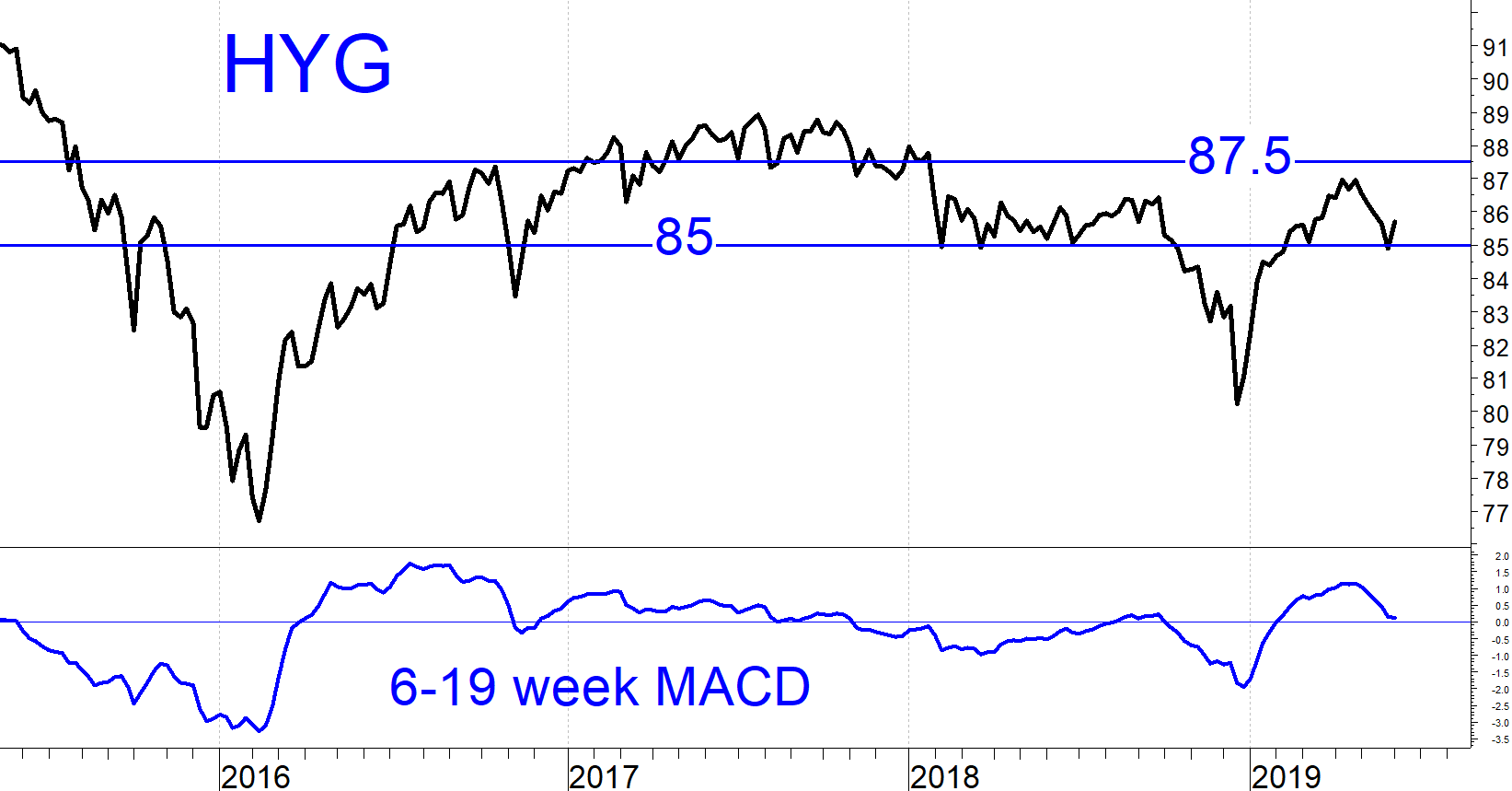 The worst-case scenario could be a retest of the Dec. 21 low, implying downside risk of 6% in HYG mitigated by accruing interest.  However, I do not expect that worst-case scenario to materialize because the Federal Reserve is more supportive of the markets now than it was in late December. The wild card could be worsening trade tensions, which you can monitor by following price changes in FXI.  As long as FXI remains above its 2018 lows (38.40), risk to high yield bonds and to the economy generally should be limited; and any further pullback in corporate high yield bond funds should be viewed as a bottom fishing opportunity.