Gold and gold mining stocks are on an upswing and will likely remain strong if—and perhaps when—major market averages after, notes Mike Larson.

It’s been a solid year for stocks, but we are nearing a moment of truth for equity markets.

A group of undervalued, underappreciated stocks are now trouncing the averages. They spent 18 long months in purgatory— underperforming even plain-vanilla Treasury bonds— but they’re trying to break out. We’ll see whether this move sticks.

Look at this table, which I built using the Weiss Ratings ETF Screener tools. It shows the one-year performance of the SPDR Gold Shares ETF (GLD) that tracks bullion prices, as well as a handful of the largest gold mining ETFs. They include both larger funds like the VanEck Vectors Gold Miners ETF (GDX) and smaller ETFs like the iShares MSCI Global Gold Miners ETF (RING).
I also included the three ETFs that track the major averages: SPDR S&P 500 (SPY), SPDR Dow Jones Industrial Average (DIA) and the Invesco QQQ Trust (QQQ), plus the iShares 20+ Year Treasury Bond ETF (TLT) that tracks long-term Treasury bonds.

What do you see? 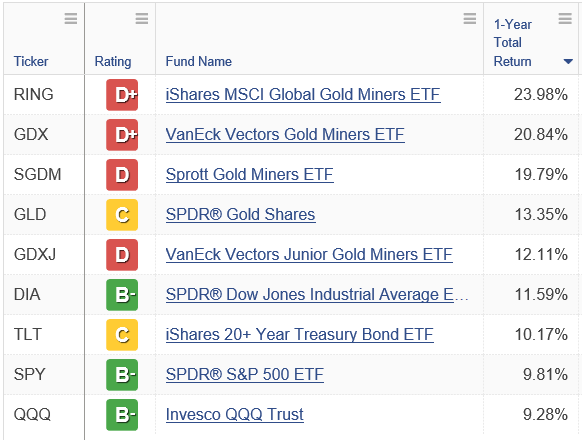 Okay, but what about year-to-date? It’s been a strong year for stocks, so surely, they must be coming out on top, right?

Well, that depends on what kind of stocks you’re talking about. Two of the four ETFs in my chart that own gold stocks beat the Invesco QQQ Trust (QQQ), while three of the four topped the SPY. 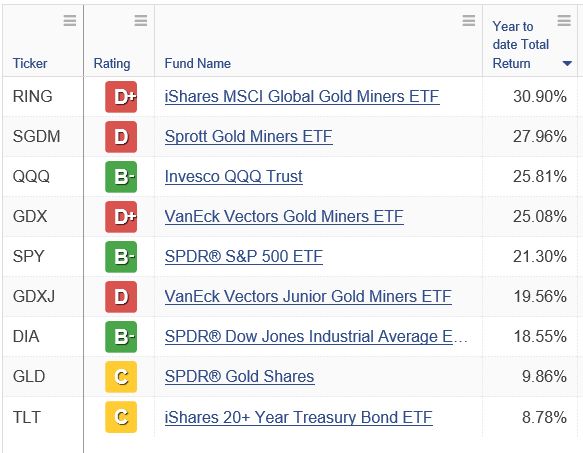 In the very short term, the performance gap is even more glaring.

The RING ETF shot up more than 23% in the past three months, compared with a rise of only around 4% for the SPY and QQQ.

As for GLD, it returned roughly 2.5 times as much as the stock market averages during the same period. 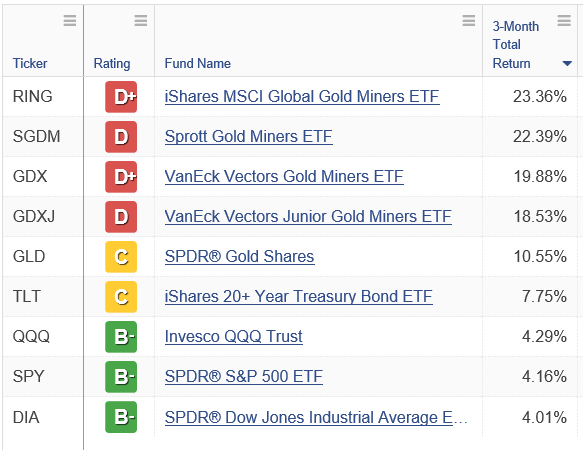 We all know hindsight is 20/20. And I wouldn’t be surprised at all if both gold and gold miners took a breather after their big recent run. But in the longer term, these figures validate all the things I’ve been telling you about gold and gold stocks since last summer.

They benefit from several forces, including rising volatility, the global proliferation of negative interest rates, and the ongoing turn in the credit and economic cycles. Plus, they’re among the handful of relatively cheap, undervalued assets in an ocean of overvalued ones.

So, while you’re waiting to see whether this attempted breakout in stocks holds or not, consider adding precious metals or miners to your portfolio. They’ve clearly outshined the averages for some time now. Yet unlike money-losing IPOs or red-hot tech stocks, they seem to have very few champions in traditional investing circles.

That tells me this bull market is likely just getting started.

And that’s why I’m pleased to announce that I’ve added an extra gold-focused presentation to my list of events at the MoneyShow San Francisco. The conference runs from August 15 through August 17 at the Hilton San Francisco Union Square.

I hope to see you there. I’m confident that together, we can identify some compelling profit opportunities in this underappreciated sector. Safe Money subscribers of Weissratings.com.

Refranchising Efforts Serve up Gains at Wendy’s
16 hours ago