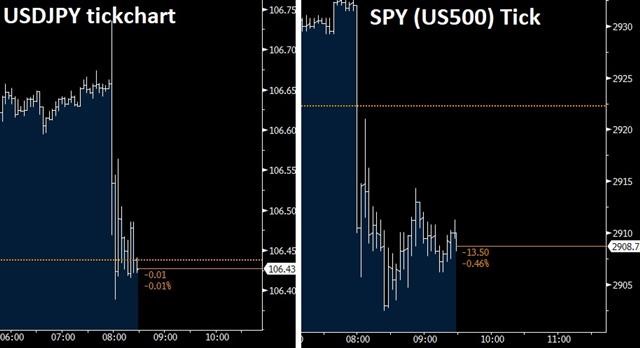 The market is trying to figure out what the Fed is going to do next. A quarter point cut is fully priced in at the Sept. 18 meeting with the odds of a 50-basis point move falling to just 3.0%.

That sense of confidence from markets was not confirmed by Fed talk on Thursday. KC Fed President George will again likely dissent against a rate cut to leave rates unchanged, saying it's not the time for accommodation. On the other side was Dallas Fed President Kaplan who said risks were to the downside and that if they wait for consumers to slow down it might be too late. At the same time, he said that he doesn't want to cut rates unless they have to. Finally, Philly Fed President Harker said he doesn't see the case for further easing and would rather take some time to see what unfolds.

Harker and Kaplan are currently non-voters but will vote in 2020. Mester (non-voter) and Bullard (voter) will both speak Friday.

The comments from the Fed chairman failed to satisfy President Trump who referred to Powell as a bigger enemy than China. Powell did not close the door on a September cut, but the market is pricing in a series of cuts and President Trump called for a 100-basis point cut. After September, an October move is already 63% priced in and yet another move in December is at almost 40%. That's aggressive but it may be counting on kicking and screaming in equity markets if there's anything less than a dovish message.

In other news, cable leaped to the highs of the month after Merkel cracked open the door to changes on the Irish border backstop. She had sent mixed signals after first talking about a 30-day deadline, then noting that was only symbolic and that they have until the end of October. None of it was game-changing and the price action may have said more about the market than her words – it's a market that's deeply short GBP and anything upbeat risks a squeeze.