Regardless of whether last week’s spike in trade-war related volatility is a sign of a bear market, it is time to prepare for a slowing economy reports Joe Duarte.

U.S. stocks are poised on a razor’s edge, as the U.S.-China trade war and the sour relations between President Trump and the Federal Reserve escalated to new levels last week raising doubts about the continuation of what seemed to be a fledgling rebound in stocks. Thus, the question to be answered is whether the current market will snap out of the increasingly scary volatility and rise or whether we are in for a repeat of the Q4 2018 massacre.

Unfortunately, this is not surprising. Last week, in this space, I noted: “Get ready for everything, as the financial markets could turn on a dime in the not too distant future. Indeed, vigilance will pay off given the daily news cycle and the interplay between interest rates and the Market-Economy-Life (MEL) complex.” Regrettably, even though the week started well, and stocks were continuing their recovery, by Friday the wheels started to come off.

Or course, in this Twitter hair trigger market this could all blow over quickly as both the Chinese and the White House may have been displaying gamesmanship before the G-7 summit. Still as things stood by the close on Friday and following louder rhetoric from both sides over the weekend those investors who had hedged their bets were likely to sleep better over the weekend and likely for the foreseeable future.

The bottom line is that regardless of the news cycle at this point our best bet, as it has been since the 2016 presidential election, is to let the New York Stock Exchange Advance Decline line (NYAD) be our guide.

U.S. Economy May be Rolling Over

Investors should start looking at consumer and industrial related data more closely now as the potential for an acceleration of the slowing in the U.S. economy seems more likely.

Three key pieces of economic data hit last week which will directly affect the relationship between the Markets, the Economy, and Life (MEL). First, existing home sales were better than expected, that was a positive. This was followed by PMI data which fell below 50, signaling a contracting economy for the first time in nearly a decade, clearly a negative. And finally, new home sales came in below expectations, further muddling the picture. The net result was a new down leg in the U.S. Ten Year Note Yield (TNX), which is now well entrenched below 1.6%. 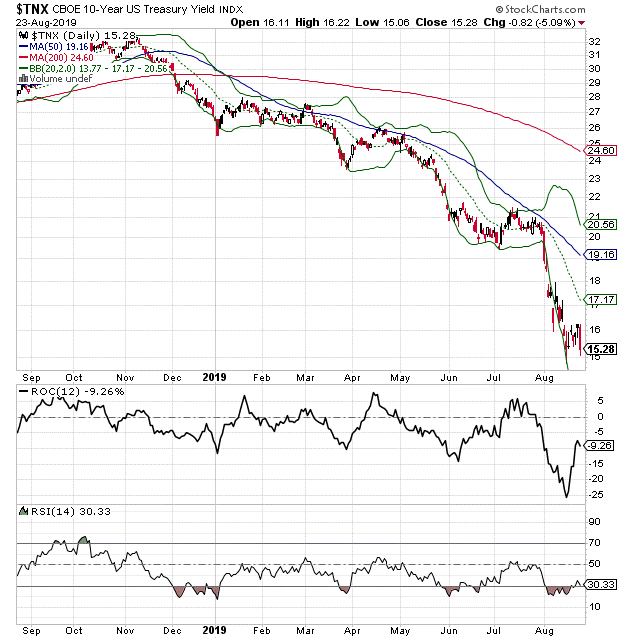 Thus, as events continue to unfold, the key is whether TNX breaks below 1.5% and what effect that incredibly low yield will have on related metrics such as mortgage rates, consumer confidence, general corporate sentiment, and the stock market. Moreover, a key sector to watch will be homebuilders as measured by the Invesco S&P 500 High Beta ETF (SPHB), the data point that connects the Life component of MEL to the markets and the economy. If nearly record low mortgage rates don’t bring out the buyers, in both existing and new homes, it is likely that the most heralded recession in recent memory may well be on its way to being fully established. 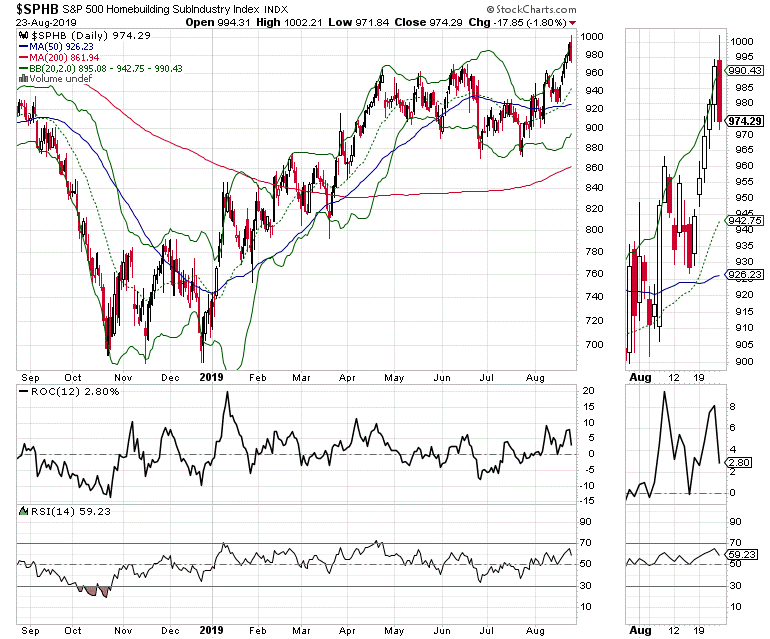 Furthermore, I have now been hearing unconfirmed reports of layoffs at major employers in the Dallas-Fort Worth area, where the economy has been purring right along over the last few years. If this becomes widespread, I would expect more trouble to appear in the regional data such as the Fed’s next Beige Book.

The stock market seems to be headed for some turbulence just as weather forecasters have named the first tropical storm of the month of August, Dorian, with expectations of it becoming a hurricane. Still there is one company whose seasonal trading pattern gains seems to make sense during both a tough market and what could be an awakening of hurricane season. If the Atlantic Ocean heats up and hurricane season arrive in full, generator manufacturer and general power solutions company Generac Holdings (GNRC) is well positioned to deliver needed supplies to those stricken and profits to shareholders. 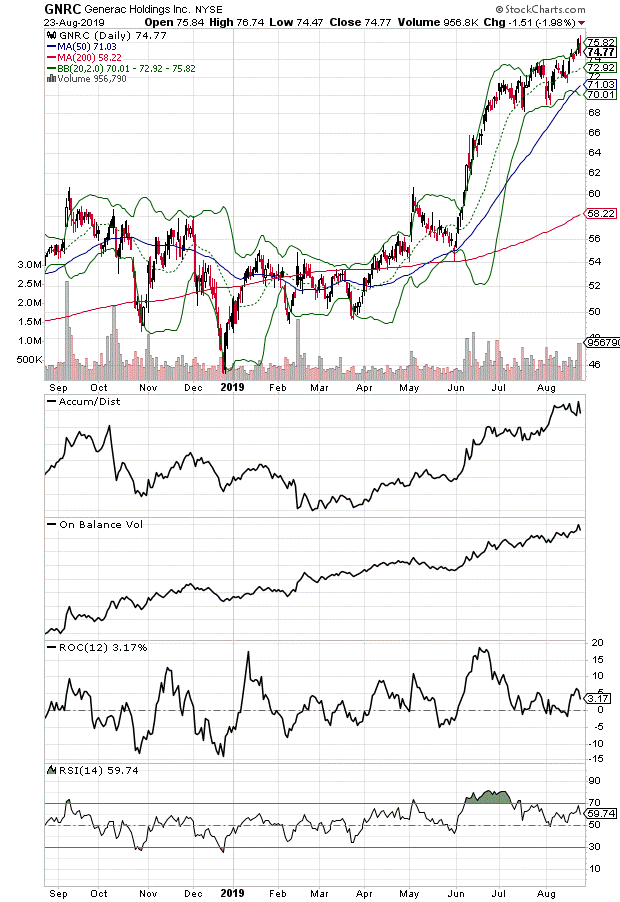 The stock has already had a good run after its most recent earnings report and upgraded guidance. But as we head into September, the so called “tropical red zone” where the odds of major hurricanes rise, the stock looks set to move decidedly higher.

GNRC shares have been waking up after their recent consolidation, while steadily trading above support at the $70 to $72 area. If the shares continue to hold up, even in a tough market, they can be bought, especially if the market does not fall out of bed altogether. If you already own it, it may be worth holding on to it as long as long as it stays above key support, as it will likely rise in response to any potential storm.

The New York Stock Exchange Advance Decline line staged a dramatic reversal on Aug. 23 and is now in danger of entering a very bearish technical pattern similar to that which preceded the October 2018 mini-bear market. 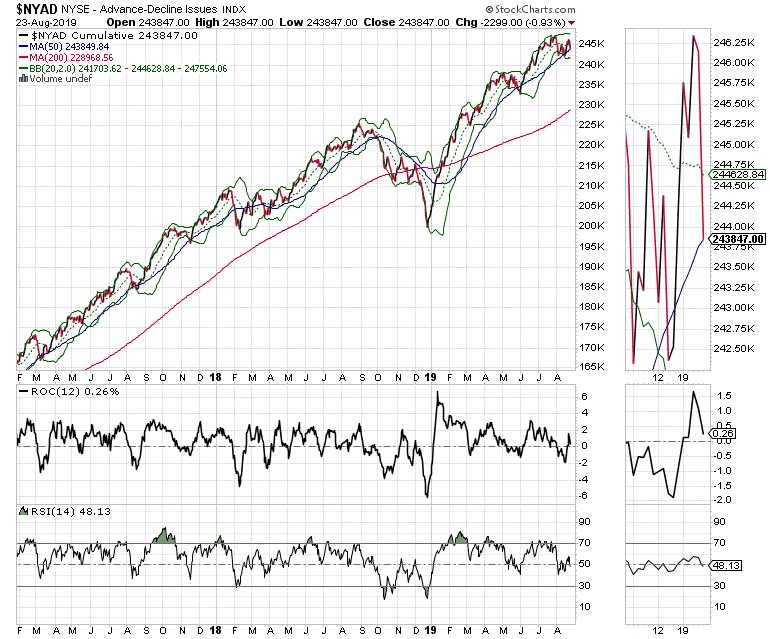 Unfortunately, NYAD was not alone, as the general technical posture of the U.S. stock market deteriorated rapidly on Friday, in response to the escalation of the U.S. China trade war and the Trump Administration’s war on the Fed. 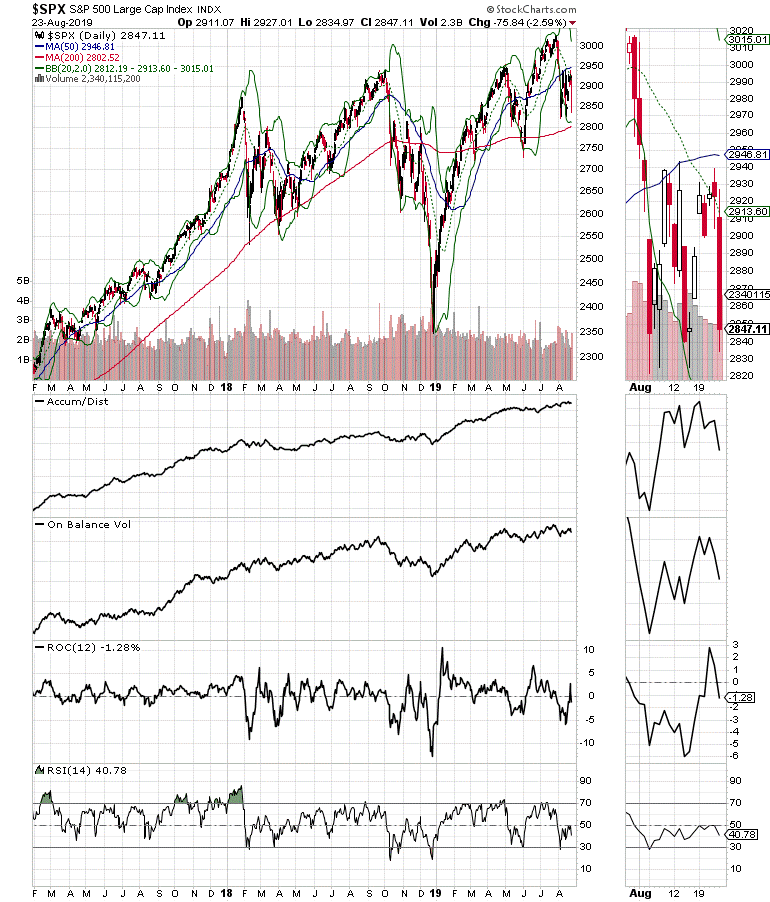 Still, NYAD did not break down completely as it held right at its 50-day moving average, a key support level. In fact, the only big decline in U.S. stocks came when NYAD broke below the 50-day line decisively on October 2018. 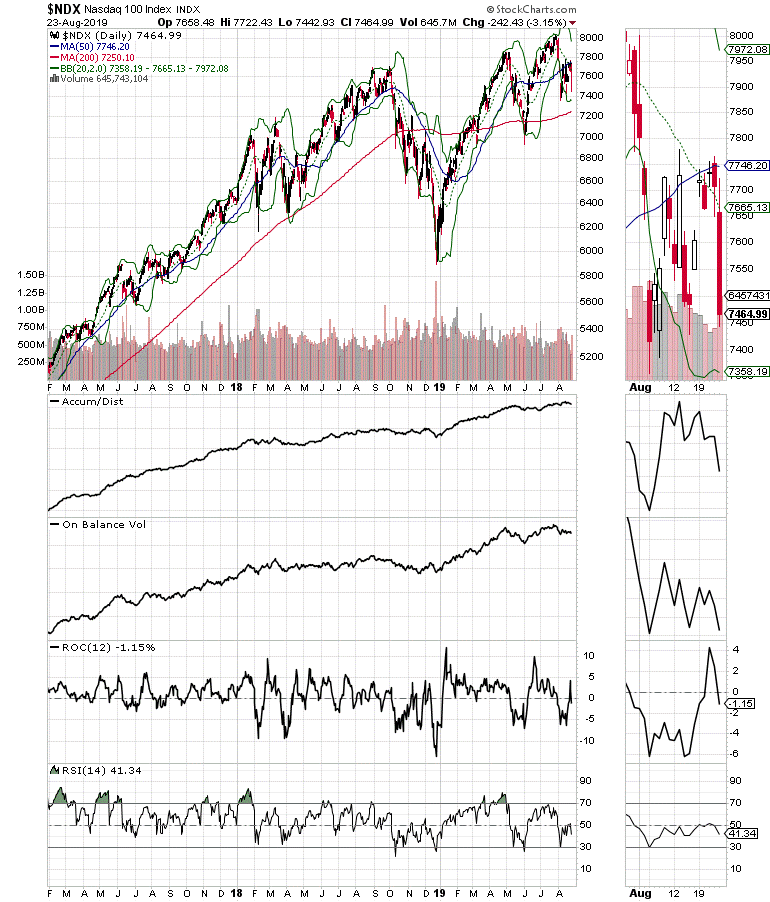 Unfortunately, both the S&P 500 (SPX) and the Nasdaq 100 (NDX) indexes did worse than NYAD. Indeed, the two indices failed to close above their 20- and 50-day moving averages as well as having failed to stay above key chart price levels of 2900 for SPX and 7500 for NDX. As a result, unless there is significant reversal the next support level to be tested will be the 200-day line for both.

A move below that line would likely lead to very aggressive selling and a return to a bearish trend.

Perhaps the most troubling aspect of the NDX chart and to a lesser degree on the SPX chart is the rolling over of the Accumulation Distribution (ADI) and On Balance Volume (OBV) indicators, which show that money is starting to come out of the market.

In a bear market, very few stocks hold up, regardless of their underlying fundamentals. What that means is that investors should now start to pay more attention to when it may be time to sell those stocks that have done well over the last few months and start to raise cash.

I own GNRC as of this writing.

Editor’s note: I will be appearing in an online chat on August 29, 2019 at Noon Easter Time at The Washington Post’s Color of Money Live to discuss my Best Selling book: The Everything Investing Guide in your 20s & 30s . Send in your questions at live.washingtonpost.com (Color of Money Live 2019)