Cisco Systems: Under the Radar Value with 5G Potential

As increased volatility pushes investors shift from momentum to value stocks there are a few old names to follow, writes Joe Duarte.

When volatility increases, as is likely in the next few days as the situation in the Middle East unfolds, caution is always the best approach. Nevertheless, volatility often precedes opportunity, which is why it’s important to build a shopping list to include stocks which may be attractive after the dust clears.

Accordingly, it makes sense to consider that Wall Street’s recent shift away from momentum toward value stocks is likely to favor networking giant Cisco Systems (CSCO). The former high star stock from the 1980s has languished in the wallflower bin for the past several months due to investor fears about the U.S.-China trade war and the lack of a major catalyst to return it to its former glory days (see chart). 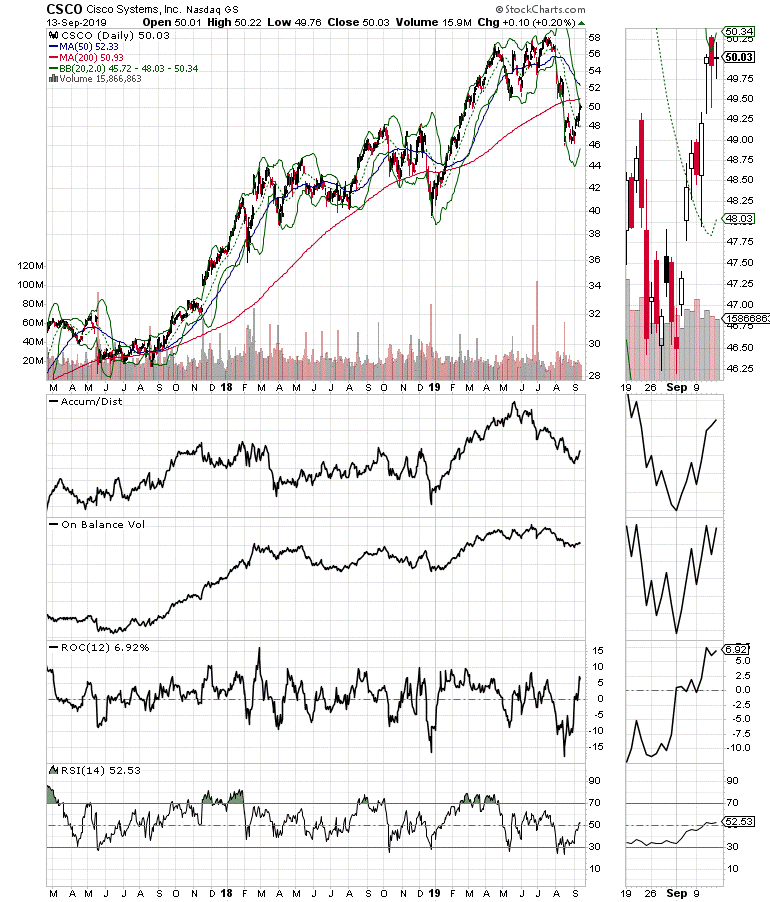 But over the last four weeks, CSCO has bottomed out and in the current market, due to its 9.55 P/E ratio and the potential for an improvement in the trade dynamic between the Unites States and China, the stock has the potential to move back toward the high $50 level in the next few weeks, barring a drastic reversal in these two factors.

Cisco’s stock took a beating after its most recent earnings report as the company cited a rapid decline in its Asia-Pacific-Japan business. What really hit the stock was the CEO’s characterization of the decline being due to China not even allowing the company to bid on projects.

On the positive side, however, is that the company is transitioning its sales and product development cycle into a subscription model, which is still in the early stages of development. This will be a huge boost when it kicks into high gear as corporations start to put their 5G infrastructure in place as well as improving their capacity to deal with rising cloud demands on systems.

The bottom line for Cisco is that the stock is inexpensive at a moment when value is back in vogue at the same time that the company’s management cycle is gearing up for growth in its business. Investors may have to be patient, but it is possible that Cisco gets caught up in the transition of momentum to value. If that’s the case, unless the entire financial system collapses as a result of the Saudi Arabia attack I would expect Cisco to move back toward the high 50s over the next few weeks to months.

Stocks Continue to Rally Despite Turmoil as Emerging Markets Breakout
06/04/2020 9:54 am EST

Stocks continue to walk the wall of worry and Emerging Markets may be preparing for a long uptrend, ...