Up until recently the U.S. Equity markets have been able to perform and grow despite a global economic weakness. That is no longer the case, reports Adam Button.

The U.S. decoupling story from the weakening global economy is dealt a severe blow after Tuesday's ugly U.S. economic reports. Global equity indices resume their selloffs as the ISM manufacturing survey slumped to a 10-year low, raising fresh questions on whether the division inside the Fed could jeopardize markets. S&P 500 and Dow Jones futures are currently below their 100-day moving average at 2918 and 26380 respectively. The U.S. ADP employment report for September show private sector job growth of 135K, slightly less than expected. 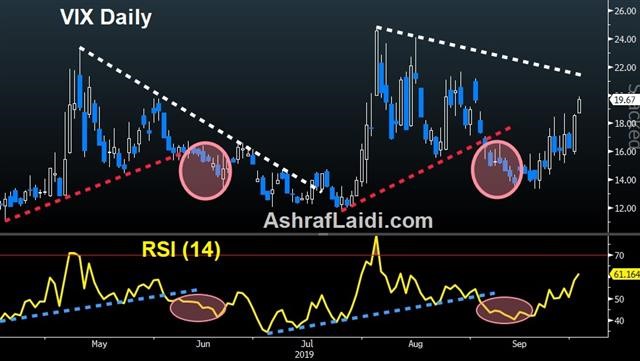 Markets had initially been off to a solid start in October with sentiment steadily improving. The solid mood was underscored by the final Markit manufacturing PMI. It was bumped to 51.1 from 51.0 in the preliminary reading and it helped to solidify expectations for a solid reading in the ISM survey to be released shortly afterwards. The result was anything but solid. It sank to 47.8 from 50.0 expected and to the lowest level since 2009. New orders and employment were particularly soft.

The data flipped the script on themes in the markets as USD/JPY dropped to 107.55 from 108.45, while US 2-year yields fell 13 bps intraday in hint that the Fed may have to ease sooner rather than later. US crude oil has reversed all of last week's gap, hitting $53.05.

The sudden weakness puts an extra focus on this busy week of U.S. economic data starting with the ADP report. The survey has been a poor predictor of non-farm payrolls lately, so the effect may be more muted. Other data still to come this week includes the services PMIs, factory orders and non-farm payrolls.

The Biggest Event of Our Lifetime
7 hours ago

Markets: Do you want to be Right, or Do You Want to Make Money?
7 hours ago

Disney: Still A Buy for DRIP Investors
11 hours ago

With the Fed backstopping U.S. equities, here is an option trade to take advantage of that, from Jay...