Stock Market: It's the Economy Stupid

Defensive sectors have outperformed since early 2018, which will likely continue in the late stages of this weakening bull market, writes Mike Larson.

Owning shares of defensive, dividend-paying companies whose businesses hold up relatively well in recessions has paid off great since early 2018.

But I still get occasional pushback from critics. They say these sectors are richly valued — they lack the growth potential of other flashier groups — and are otherwise destined for a sharp fall.

My response to those who feel that these defensive plays are overbought and due a correction, harkens back to the Bill Clinton presidential campaign: “It’s the economy, stupid.”

Back in the early 1990s, that was Clinton Campaign Manager James Carville’s way of focusing everyone’s attention on the economy.  He wanted everyone to focus on the economy that just limped out of recession and was growing at a 0.1% clip, rather than other factors that didn’t favor his candidate. That’s how Clinton would get elected. Turns out he was right.

Today, Carville’s words very much apply to this market. The outlook for the economy will determine the next major move in the averages and which sectors will lead and which will lag.

Look at this presentation slide below that I just shared at the MoneyShow conference in Dallas. 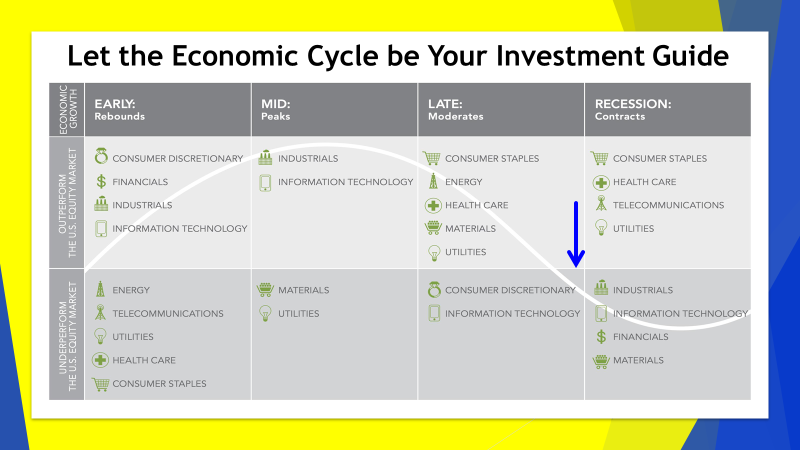 The general idea? The economy ebbs and flows, expands and contracts, in cycles. Different asset classes and different market sectors perform better and worse at different points in the process.

I’ve been saying for more than a year that my research suggests this is a late- to end-cycle environment. The economy is slowing, and the risk of recession is the highest it has been since just before the last downturn. The blue arrow highlights which phase we’re in.

Historical data suggests that if my arrow is on target: consumer staples, utilities and other defensive stocks should be outperforming the averages while industrials, technology, financial and materials stocks should underperform.

Sure enough, that’s exactly what has been happening.

The economy really is the big, long-term driver here. Headlines about Chinese trade deals written in invisible or possible Brexit breakthroughs overseas can drive short-term market moves, but if the economy is slumping toward recession in 2020 as I believe, they won’t to amount to much over time. You’ll still be better off in “Safe Money” investments!

Vermeulen's View: Is This the End of a Euphoric Bubble?
14 hours ago

How can one rationalize the upward parabolic price trend continuing while the consumer sector has co...