The S&P 500 appears to be stalling in front of the all-time high, writes Al Brooks.

The E-mini S&P 500 is again stalling around 3,000, just below the all-time high. Traders need more information before they decide between a new high and a pullback. That increases the chance of more sideways trading this week.

The monthly E-mini futures chart has a bull doji bar so far in October. It is at the top of its four-month trading range, just below the all-time high (see chart). After trading below the September low, October reversed up and is now at the high of the month. 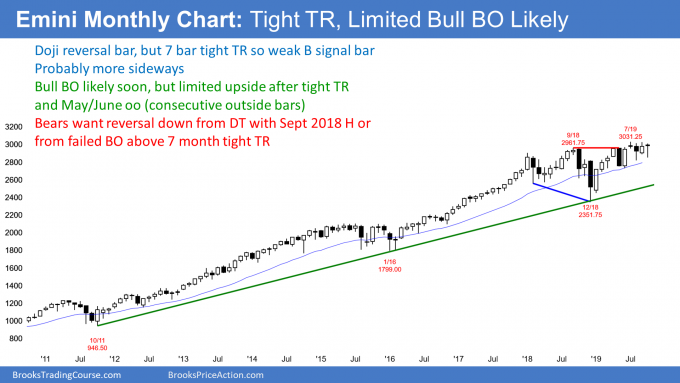 Even though the October bar is bullish and the monthly chart is in a bull trend, there will probably not be a big breakout from here. The past four months have been sideways around 3,000. That means the bulls and bears think 3,000 is a fair price. If the bulls breakout, the rally might get pulled back to the fair price within a few bars (months).

Additionally, when July traded above June, it triggered an outside “OO” buy signal. May was an outside bar and June was a bigger outside bar. When a market breaks above consecutive outside bars (an “OO” pattern) late in a bull trend, the rally usually continues for a few months.

But the rally typically does not get very far before it gets drawn back to that area of agreement. The magnet is the four-month tight trading range and the slightly lower April/May/June sideways bars. Consequently, traders will expect at least a minor reversal back to the tight trading range within a few months after breaking above it.

Trading range for another year?

While the presidential election is more than a year away, the E-mini might already be pricing in the result. If Trump remains president, traders might be relieved and feel more confident. That would make them more willing to buy stocks, which could lead to a rally.

Alternatively, if there is a new president, there will be uncertainty and some fear. There would probably be tax hikes and legislation that impedes business. The stock market might quickly sell off to the December 2018 bottom of the 22-month trading range.

Part of the reason for the 22-month trading range might be the uncertainty over the outcome of the 2020 election. If that is the case, the E-mini might continue sideways up to the election, or until the outcome is more certain.

Since a new all-time high is likely within the next couple months, the top of the range would expand. But I gave several technical reasons why the breakout will probably not be big. If it is not big, all that the breakout would accomplish would be to nominally raise the top of the 22-month trading range.

The weekly E-mini S&P 500 futures chart rallied strongly in 2019, but the breakout from January through May weakened and became a bull channel in June (see chart). The chart is still a bull trend and therefore traders expect higher prices. What traders do not know is how high. 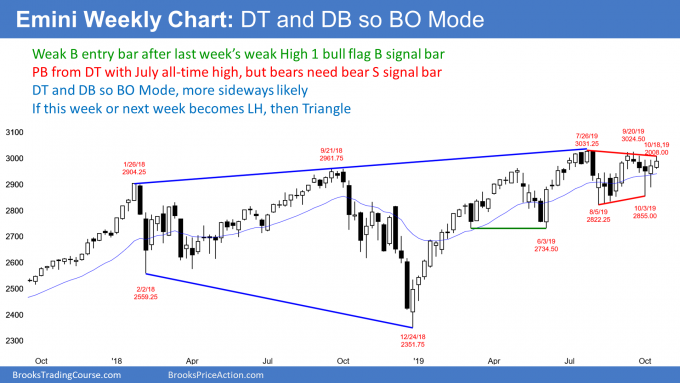 Last week rallied above the previous week’s high after a four-week pullback. Last week was a High 1 bull flag buy signal bar. When this week went above last week’s high it triggered the buy signal.

I said last week that the setup was weak and that there might be more sellers than buyers above last week’s high. There were. Last week closed below the previous week’s high.

Bullish, but not yet very bullish

There are several factors that reduced the bullishness of last week’s breakout. While the previous week had a bull body, it had a prominent tail on top. That hesitation made it a less reliable buy signal bar.

That bar followed three weeks with bear bodies, which is a sign that the bears were in control for a long time. Those bear bars increase the chance that the bears will retake control within a couple weeks.

Also, the E-mini is just below the all-time high. Ten of the past 14 weeks traded above the September 2018/July 2019 double top, but none has been able to break free. Until there is a breakout, there is no breakout.

The E-mini has been sideways for four months and is now at the top of the range. If the bulls do not get a strong breakout to a new high within the next few weeks, many will be disappointed. Some will exit and look to buy again lower. If enough exit, there could be a test of the bottom of the four-month range at around 2800.

Finally, I have written about the expanding triangle top many times. It is often a reversal pattern. There is still a 30% chance that the E-mini will reverse down to the December low at some point over the next six months.

The daily E-mini chart is in a six-bar tight trading range. Five of the past six days were doji bars. Traders expect reversals every day or two (See chart). That lowers the probability for stop entry traders. 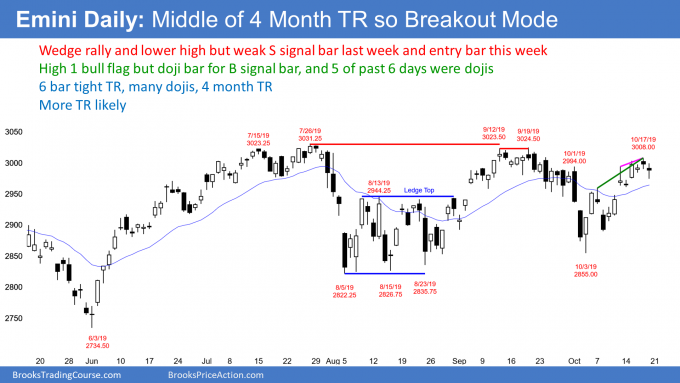 There is a five-bar wedge top, but Friday’s reversal down was weak. Friday is now a High 1 bull flag buy signal bar for Monday. But it has a bear body and it is in a tight trading range. This is a weak buy setup.

The E-mini will probably continue sideways early next week. Traders expect a new all-time high this month. If they do not get it, many bulls will exit and wait to buy again lower. As a result, if the rally continues to stall, traders will sell, expecting a leg down in the four-month range.

If there is a selloff from here, there would be a second lower high in the four-month range. The pattern would then be a triangle. However, the chart is already in Breakout Mode, and creating a triangle will not changes things. Until there is a breakout, traders expect more sideways price action.