Last week’s Bitcoin breakout was nice call, but the cryptocurrency is still in a bearish trend, writes Matt Weller.

Last week, we highlighted a Bollinger Band “Squeeze” pattern in Bitcoin, noting that “the market is poised to see a breakout and a return of volatility.”

While we were looking for a bearish continuation at the time, a major fundamental development before the weekend flipped the script for the entire crypto market. Xi Jinping, the President of China (a country that was previously hostile to crypto assets), stressed that the country should “commit to accelerating the development of blockchain (the technology that underpins Bitcoin) and aim at taking the leading position in the emerging technology.” According to Xi, China will promote using blockchain technology to solve real problems in the existing financial system and is ready to launch its own national digital currency after five years of development.

Coming from the leader of the world’s second-largest economy, this strong endorsement of the potential for blockchain technology led to a massive rally in Bitcoin and the crypto markets more broadly. After finding support at previously-identified support at $7,300, Bitcoin surged nearly 40% in less than 48 hours to hit an intraday high above $10,300 (see chart). 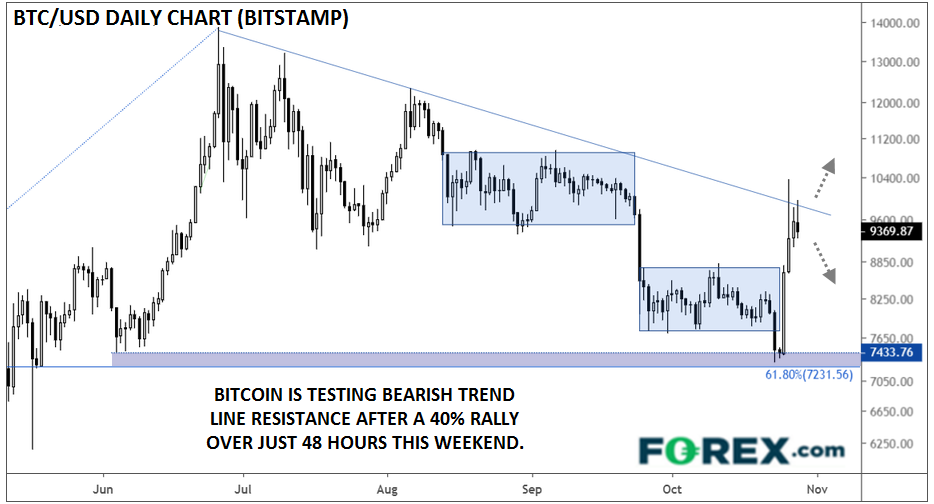 Prices have since settled down in the mid-$9,000s, solidly above the late-September to mid-October range. Technically speaking, Bitcoin still remains in a textbook bearish trend off its June highs, with the general trend of lower highs and lower lows intact.

While this weekend’s fundamental news may mark a more significant turning point for the cryptocurrency, bulls who missed the initial surge may want to wait to see if prices can close above the bearish trend line and key psychological resistance in the $10,000 area before buying. Meanwhile, bears could see the current stall at trend line resistance as an opportunity to bet against the near-term momentum for a retracement back toward $9,000 or below this week.