Ride the Momentum but Be Aware of Risk

The trend is your friend, but trends can reverse so traders need to remain vigilant warns Joe Duarte.

The stock market’s end of the year rally is gathering steam pushing technology stocks selectively higher and spreading to more sectors, such as selected retail stocks.

This, more than anything, is a sign that the Fed’s repo liquidity operations are pushing money into stocks, especially as bond yields have calmed down for the moment. Barring something spectacularly negative – China, impeachment, and the usual list of potential bad things that are lurking - the path of least resistance for stocks, with some likely bumps along the way, remains upward perhaps well into the start of the new year.

Over the last couple of weeks, I’ve noted that the U.S. 10-year Treasury note yield was moving toward the 1.9% area, and that a cross above that yield could have negative effects on the Markets-Economy-Life (MEL) ecosystem, especially in the housing market. Thus, it was a welcome development for the bulls when yields failed to move above that key chart point and reversed in the middle of last week. 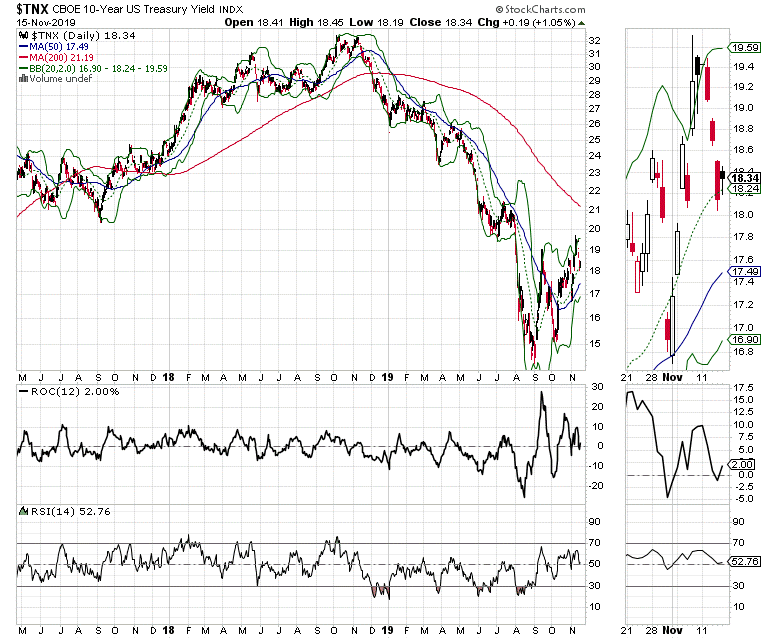 Indeed, as I’ve been expecting, the interplay between the Federal Reserve and bonds is playing out within the mortgage and housing markets. For example, last week’s mortgage applications for home refinancing rose 12.9% while mortgages for new home purchases rose nearly 5%. This rise in both types of mortgages occurring simultaneously with the rise in yields suggests that both refinancers and new home buyers were betting that the bottom in rates was in and decided to make their move.

Of course, they may be right. But frankly, in this very fluid time in which events can change at the drop of a hat, this may or may not be the case. Nevertheless, that’s what seems to be going on for now, so the real question is what happens over the next few weeks both in the bond market and in the housing market as consumers respond and the MEL complex adaptive ecosystem moves on toward its next point of emergence and evolution.

The action in the largest homebuilder in the U.S., DR Horton (DHI) is worth watching as a bellwether. The company reported better than expected earnings last week but missed slightly on its revenues noting that the average closing price for newly built homes was flat compared to last year while the most recent quarter’s new sales price was up a mere 1% year over year (see chart). That may be good news for consumers, but it’s hardly the stuff that drives a stock decidedly higher, which suggests that even though the economy may be stable, and that DHI is going to make money over the next few quarters, the days of heady growth for the homebuilders may have passed, at least for the moment. 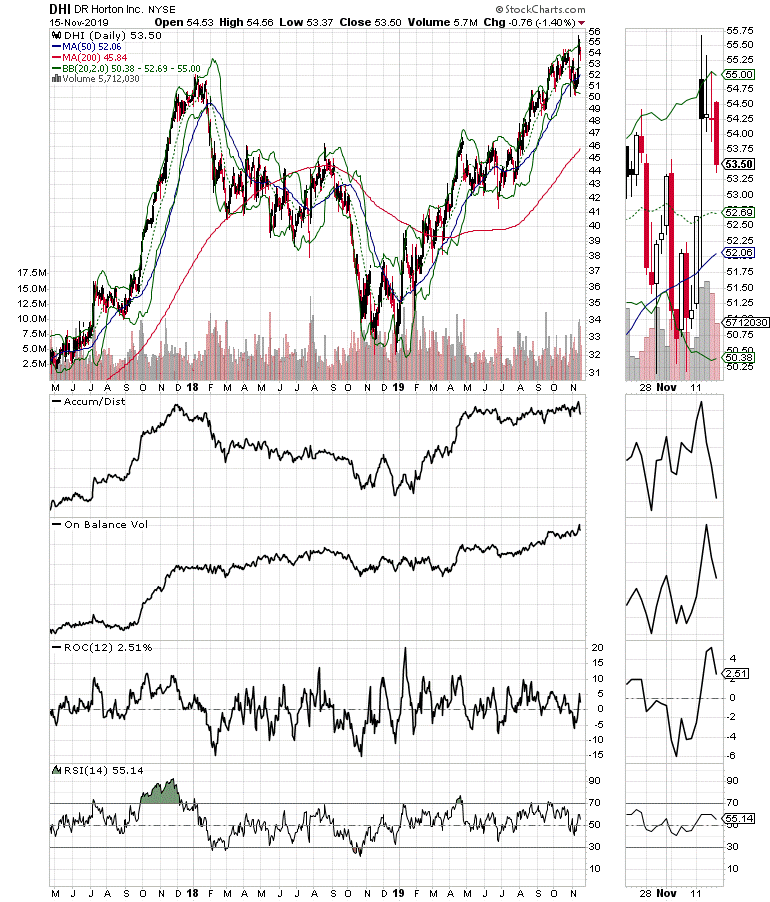 Incidentally, the company’s reported rise in its gross margins was due to a decrease in customer incentives, not to pricing power or to a large growth in orders or sales. Furthermore, Horton’s tone on its conference call was moderately upbeat at best, maintaining its forward guidance close to fiscal 2019. So, although the stock is near its 52-week highs, it’s not likely that it will make much headway in the near future given the rise in bond yields and the Fed’s resistance to lowering rates further unless the number of buyers rises well above current levels.

The New York Stock Exchange Advance Decline line (NYAD), the most accurate indicator of the strength of the U.S. stock market made a new high on Nov. 15, a sign that money is still moving into stocks and that the uptrend, for now, remains intact. 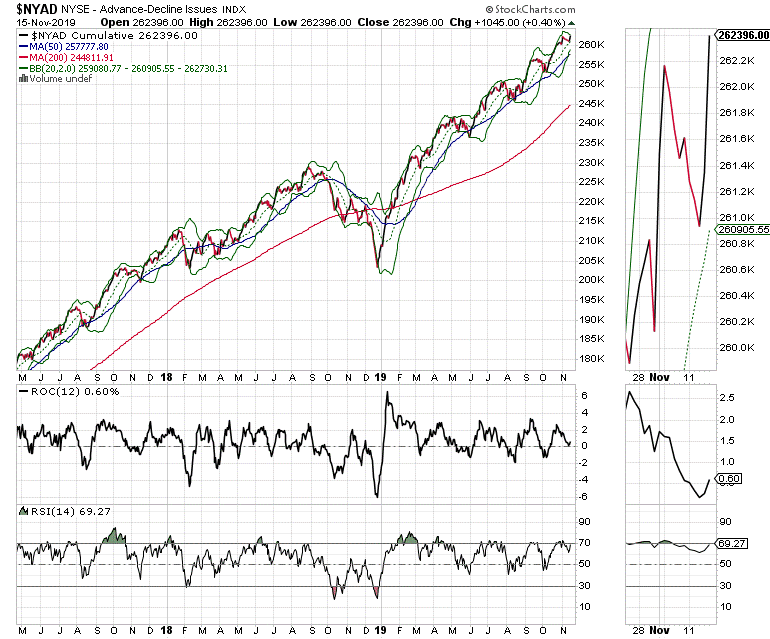 The S&P 500 (SPX) made a new high last week confirming the uptrend for stocks. The rally is starting to show broader participation which suggests that the Fed’s repo market operations, aka its backdoor easing of monetary policy without lowering official interest rates is causing investors to move money into the stock market. 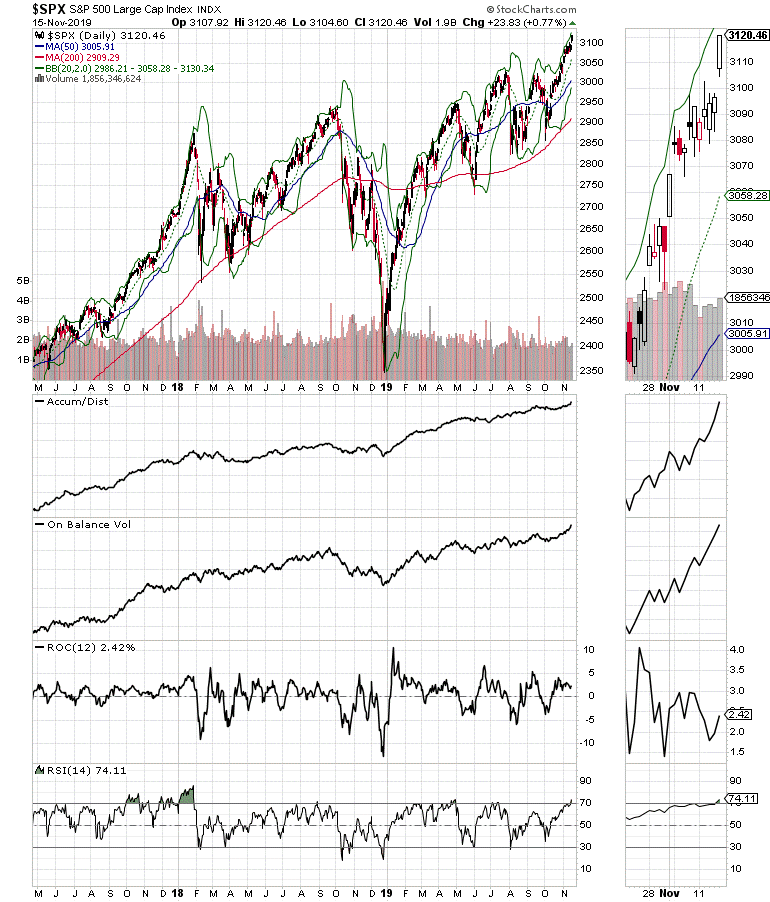 The Nasdaq 100 index (NDX) is also making new highs regularly now confirming the uptrend. The general expectations that there will be some type of trade deal between China and the U.S. as well as the Fed seem to be pushing this index higher. 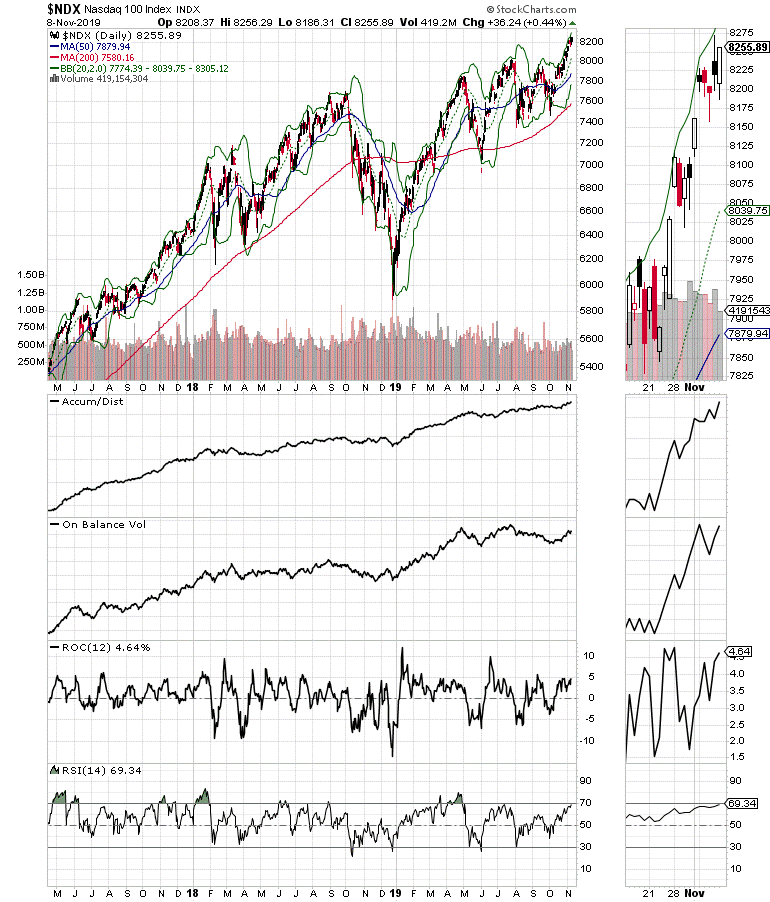 It is important to note that the gains in the technology sector are not as widespread as would be expected if there were extremely high expectations of a trade deal. For example, networking stocks, which would benefit from 5G related gains from a deal are still not moving in tandem.

Ride the Momentum but Beware of Risk

The classic rules of stock of investing according to the late Wall Street great Marty Zweig are: Don’t fight the Fed and interest rate trends and don’t fight the market the market’s momentum.

And this is a classic time to follow Zweig’s advice as the Fed’s repo operations continue to pour billions into the banking system creating a flood of liquidity which is finding its way into the stock market.

Certainly, the news is good for the bulls, but there is always a flip side. And in this case, it’s all too familiar as all momentum runs in the stock market end badly. Thus, at some point, this market will show signs of weakness and the uptrend will reverse. That said, there are no signs of that at the moment, which means that investors who stick with the trend will be rewarded.

Still, it’s never a bad idea be skeptical, to monitor sell stops, to look for profit taking opportunities and above all, don’t stay at the party too long.