The euro has been in a bearish channel for two years, is it ready to turn, asks Al Brooks.

The EURUSD currency pair is trying to reverse up from a head and shoulders bottom (major trend reversal) on the weekly chart. A second leg up is likely after the October wedge bottom.
The euro has been in a bear trend for two years and in a trading range for four months, perfectly illustrated on the weekly chart (see below). 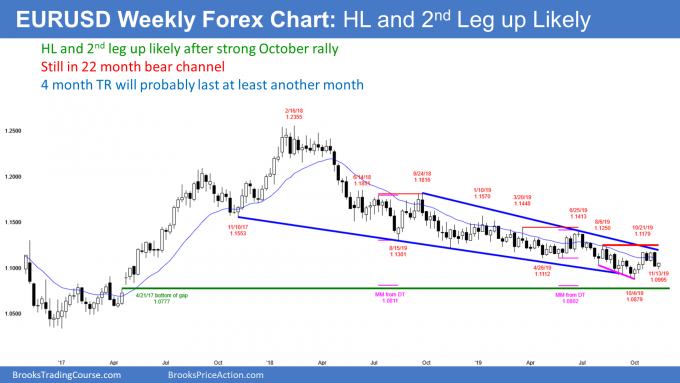 Two weeks ago was a big outside down bar, but last week did not have follow through selling. It is a reversal up from a higher low after a small two-legged pullback from the October high.
Is the bear trend resuming or will the bulls get a second leg sideways to up after the October rally? The three-week October rally was the strongest rally on the weekly chart in the entire bear trend.

urthermore, it followed a nested wedge bottom. Traders should expect a second leg up.

This week is a buy signal bar for a higher low reversal. Since the legs up and down on the weekly chart only lasted a few bars, the reversal up will probably be minor. However, it might be major on the daily chart. A minor reversal means that a rally would more likely be a leg in a trading range than the start of a bull trend.

Remember, markets have inertia. They resist change. The EURUSD weekly chart has been sideways for four months. Traders will look to buy selloffs and sell rallies.

The current selloff is now in the buy zone, which is the bottom third of the four-month trading range. This week is a buy signal bar for next week. If the EURUSD reverses up, traders will expect a test of resistance. That is the October high and the top of the 14-month bear trend line. Both are around 1.12.

If a rally continues, the next target is the June major lower high just above 1.14. If there are consecutive closes above that high, traders will conclude that the bear trend has ended. They would then think that the chart is now either simply in a trading range or the early stage of a bull trend.

There have not been consecutive bull trend bars on the monthly chart (not shown) since the bear trend began almost two years ago. This is a strong bear trend. Since the bear channel on the monthly chart is tight, the first rally on that chart will probably be minor. That means it could last a few months. Traders would then look for a test back down.

A second reversal up at that point would have a better chance of leading to a major trend reversal up and a test of the start of the bear channel. That is the September 2018 high just above 1.18.

There would also be a higher low major trend reversal on the monthly chart. A major reversal usually results in a trading range, but there is a 40% chance of it growing into a bull trend. That means a test of the February 2018 high above 1.2550.