We have one new trade this week. The soybean oil setup we discussed in the Oct. 28 letter has come to fruition.

We wrote: “December soybean oil is also displaying a similar setup. Processors have been increasingly aggressive in hedging their anticipated production over the last few weeks. The increase in their net short position by more than 40k contracts has triggered our “anxious” indicator, which tells us that their current actions are quantifiably different than what we’d typically expect. Finally, processor selling has now reached a new 52-week low watermark, surpassing February’s sales. Look for resistance in December soybean oil with the 120-week moving average coming in at 32.23, and commercial selling intensifying.”

December soybean oil peaked the following week at 31.96 on Nov. 5. It turned out to be a reversal high and triggered a daily Commitments of Traders (COT) sell signal to our subscribers that night using the 31.96 high as the protective buy stop. Remember, this is a pattern-based reversal methodology. Our reversal forecasts are always bound by a protective stop placed at the recent swing high or low. Daily COT signals traders now have more than a full point of profit in this trade.

More importantly, the commercial traders’ behavior remains, “anxious.” The commercial sellers have been net sellers for six straight weeks and have increased their total position by more than 100k contracts over the same period (see COT table below). The growing commercial position created another 52-week bearish low in their net position, and once again, their selling pressure is more than two standard deviations beyond normal. Their anxious actions suggest that they are also selling against the resistance mentioned on Oct. 28. This combination of factors shows that the bean oil processors were exceptionally eager to sell a large portion of their forward output at the market’s current prices because they expect the market to be trading lower as future contracts are delivered. 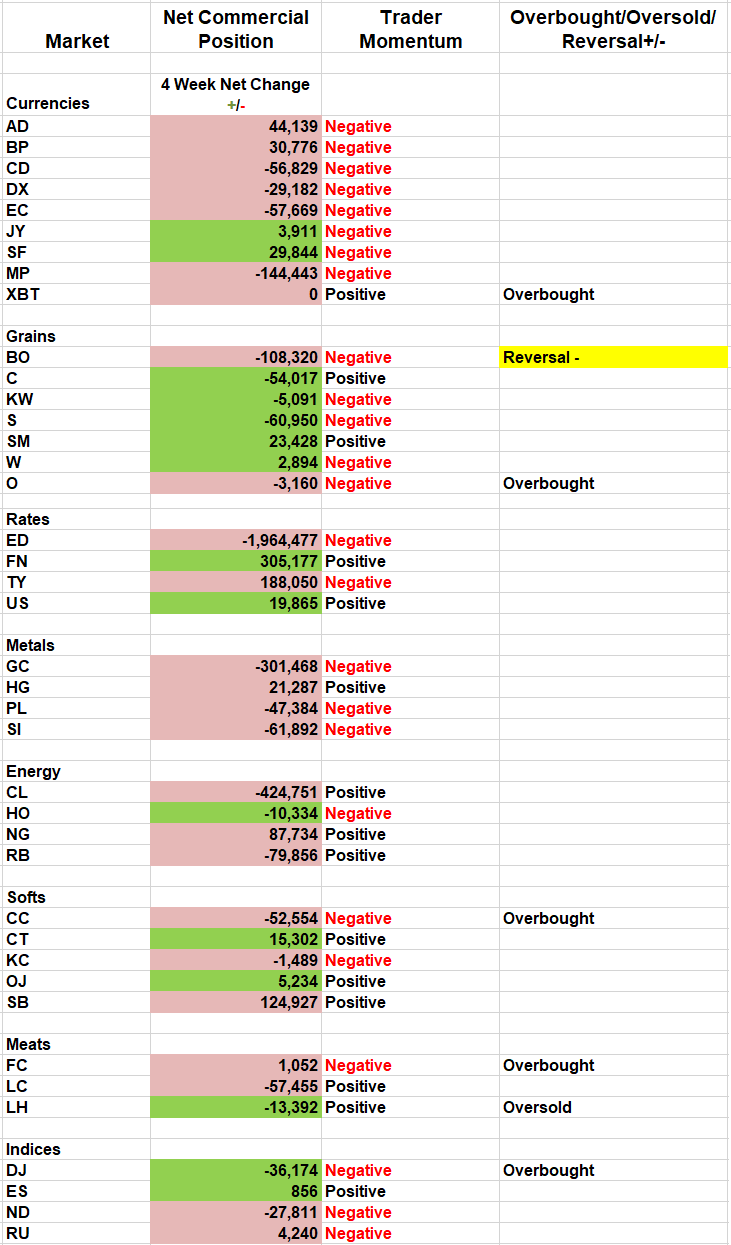 Crude Oil
Finally, the crude oil market is creating a similar setup. We took a small loss on our seasonal crude oil short sale based on the blending reformulation of winter gasoline. While the outright seasonal trade was not profitable, the growing setup of commercial selling into rallying prices approaching while approaching significant overhead resistance holds the potential to be far more lucrative.

Commercial traders have been net sellers of West Texas Intermediate (WTI) crude oil in each of the last four weeks. Meanwhile, the crude oil is bound overhead by significant trend-line, moving average, and price resistance, beginning around $60.25 and extending to $61.60 for the coming week. Therefore, we’ll approach it in the same way we did soybean oil. Look for opportunities to sell into a rally and capped by the resistance at $61.60. We’ll see if the rally lasts long enough to create an overbought situation, which would set the trigger for the daily signals.