Can Kohl's Morph into Amazon?

They say imitation is the sincerest form of flattery, and we may be watching some intense flattery this Christmas retail season as brick and mortar retailer Kohl’s (KSS) seems to be taking a page out of Amazon’s (AMZN) playbook.

I recently recommended KSS shares as the stock has been acting well and recently crossed above its 200-day moving average with solid confirmation from On Balance Volume (OBV) and Accumulation Distribution (ADI). I also spoke to several knowledgeable sources on retailing who confirmed that the Kohl’s stores they frequent and monitor are starting to see noticeable increases in traffic. 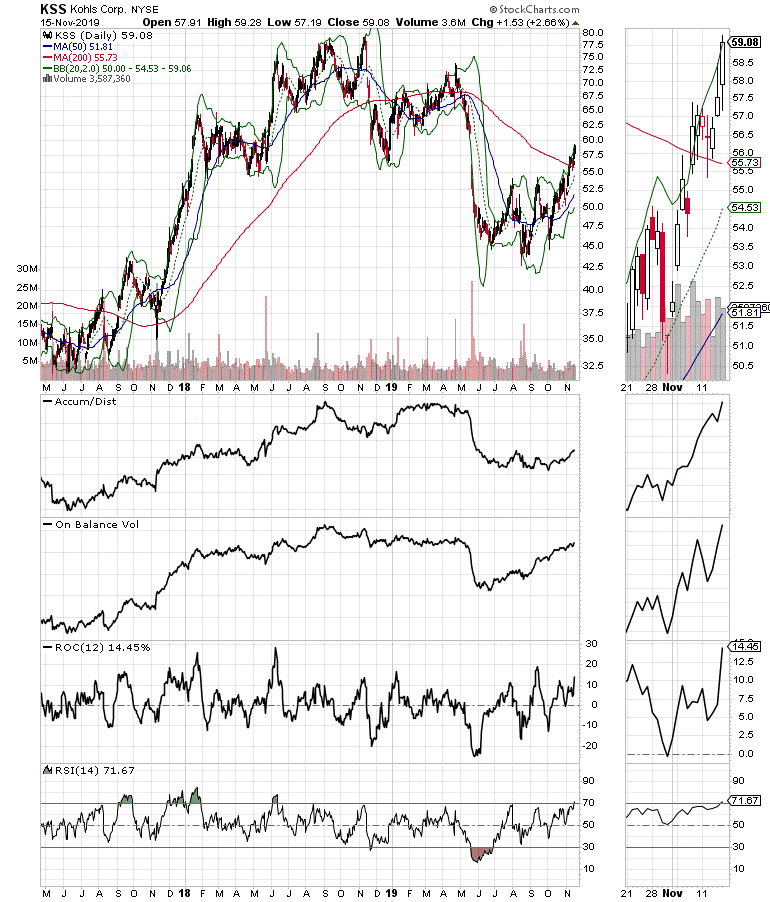 Kohl’s is well known for its promotions, such as its Kohl’s cash reward program and its coupon offers. But suddenly it seems to have become an Amazon.com clone, complete with both an online and a brick and mortar presence to engage its cult of loyal shoppers on multiple fronts. This year, however, Kohl’s seem to be taking its promotions and incentives into a higher gear, by starting with its Christmas season push early and integrating the shopping app, the web site and the brick and mortar stores nearly seamlessly and to a greater degree.

Kohl’s has also put together numerous exclusive deals with designers of both clothing and home goods in order to attract customers along with toy and technology promotions including Amazon gadgets, active wear and beauty products while wrapping everything up with aggressive social media interaction and adding a same day delivery service.

The net effect, for now, seems to be that investors are willing to take a chance on the shares, which are moving higher. So, it’s not a bad idea to follow the money. After all, this type of integration of shopping modes and heavy promotion is what made Amazon.com number one. I like this strategy and I like KSS.

I do suggest a bit of caution as KSS reports earnings on today (Nov. 19). And even though the current trading pattern suggests that investors are expecting good news, keeping a well-placed sell stop under any shares will help you sleep at night especially if KSS delivers a negative surprise in the report and the shares get crushed.

I own KSS as of this writing.