With its latest quarterly earnings report a few weeks in the past, short-term options implied volatilities have cooled way down on Irish biopharmaceutical stock Alkermes (ALKS). The equity's Schaeffer's Volatility Index of 48% registers in the 23rd percentile of its annual range, which means front-month options have priced in lower volatility expectations only 23% of the time over the past year. With modest option premiums allowing for maximum leverage, now is an opportune time to bet on the next directional move for ALKS.

And according to data from Schaeffer's Senior Quantitative Analyst Rocky White, the stock's next big move could be to the downside. ALKS just barreled into resistance at its 120-day moving average (in red on the chart below), which has proven to be a stubborn layer of resistance over the past couple of years. More specifically, previous challenges of its 120-day trendline by ALKS have yielded an average 10-day loss of 9.45%, with only 20% positive returns on five occurrences over the past three years. 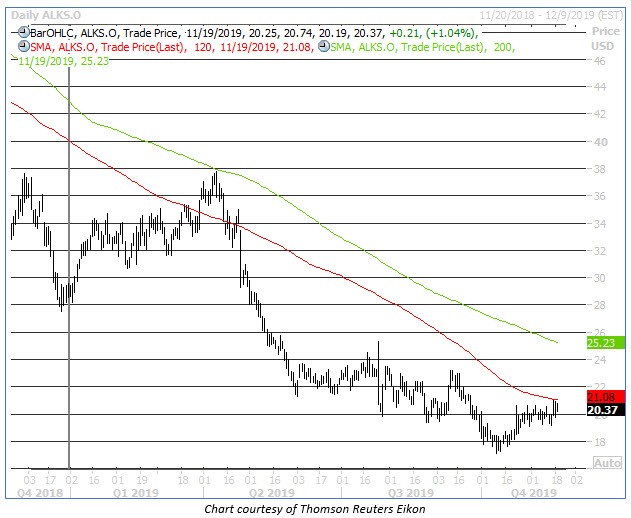 Based on the stock's close last Friday at $21, this projects a move down to about $19 for the shares over the next couple of weeks. Such a slide would leave ALKS hovering just above $18.67, which is the price point marking a 50% haircut from its April year-to-date closing high at $37.33.

Meanwhile, with the Schaeffer's Volatility Index for ALKS currently hovering right around its two-year historical average, White's modeling forecasts that an average pullback from this 120-day resistance could translate into a steep 193% return on a 10-day at-the-money put option on the biopharma stock -- nearly triple the price of entry.

Prospective put buyers will be encouraged to note that short sellers appear to be firmly in control of ALKS at the moment. Short interest rose by 18.8% in the past two reporting periods, including a 16.1% rise in the most recent two-week stretch. These pessimistic positions now account for 4.3% of the equity's float, but Alkermes bears still have room to more than double their current 5.5 million-share bearish stake before revisiting the short-interest highs of early 2018. As shorts continue to pile on, the resulting selling pressure looks set to exacerbate existing technical pressure.

Finally, there's also room for some downgrades on the stock, which has dropped roughly 39% over the past 52 weeks. There's currently not a single sell rating out there on ALKS, and the average 12-month price target of $25.08 — implying expected upside of more than 23% — has been grazed by the stock just once, on an intraday basis, since last May. In the short term, any downgrades or price-target cuts could spark fresh selling.