The Euro has been headed lower in a controlled selloff, and refuses to breakout out significantly in either direction, writes Al Brooks.

The EURUSD currency pair is trying to get a second leg up after its October rally. The bulls might need a double bottom with the Nov. 14 low first.

The EURUSD weekly chart formed a buy signal bar last week. It was a bull bar closing near its high, which is good. But the context was not so good (see chart). 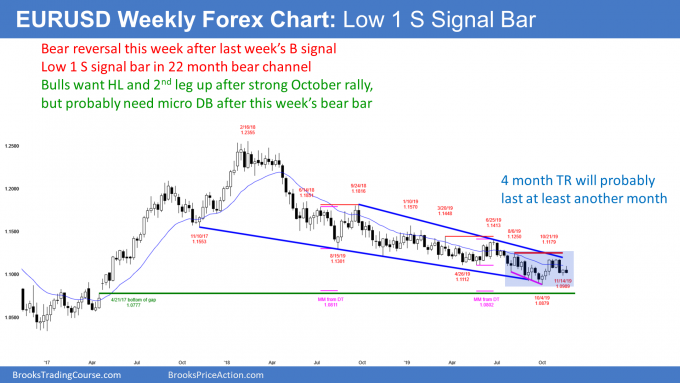 The weekly chart has been in a bear trend for 22 months and in a tight bear channel for 14 months. Also, the week before was a surprisingly big bear bar closing on its low. Was the buy signal bar a strong enough foundation to support a rally that would reverse that selloff? It might have been, but the bulls needed a strong entry bar this past week. They did not get it.

Now traders are wondering if the four-week selloff will continue down to the October low. This past week closed on its low. It is now a Low 1 sell signal bar for next week.

The October rally had three consecutive bull bars closing near their highs. This was the strongest rally on the weekly chart in the two-year bear trend. Consequently, traders are looking for a second leg up. The bulls tried over the past two weeks but failed.

Furthermore, I said that the bulls might need a micro double bottom test of the Nov. 14 low before they could get that second leg up on the weekly chart. That appears to be the case.

A new low in the 22-month bear channel?

Can the bears get a breakout below the October low? Now, it is more likely that the bulls will get a second leg up to the October high and the 13-month bear trend line at around 1.12. But they may need a double bottom with the Nov. 14 low on the daily chart. That would be a micro double bottom on the weekly chart.

Even if the bears break below the October low, traders will buy the breakout. It would be no different from any of the other new lows for almost two years. The bears buy back shorts at every new low and the bulls buy for a two- to three-week reversal up.