While it’s true that traders generally fear uncertainty, and with the specter of Brexit and a looming election, there is no major currency that’s experienced more uncertainty this year than the pound, it’s also true that ambiguity creates opportunity for traders. As the perceived probability of no-deal “hard” Brexit has faded, the pound has come storming back against its rivals, hitting a seven-month high against the U.S. dollar and a 2.5-year high against the euro.

Keying in on EUR/GBP, the pair briefly peeked below 0.8480 to its lowest level since May 2017 this morning. From a technical perspective, rates remain in a clear downtrend off their August highs, with the unit down an astounding 800 pips over that period (see chart). 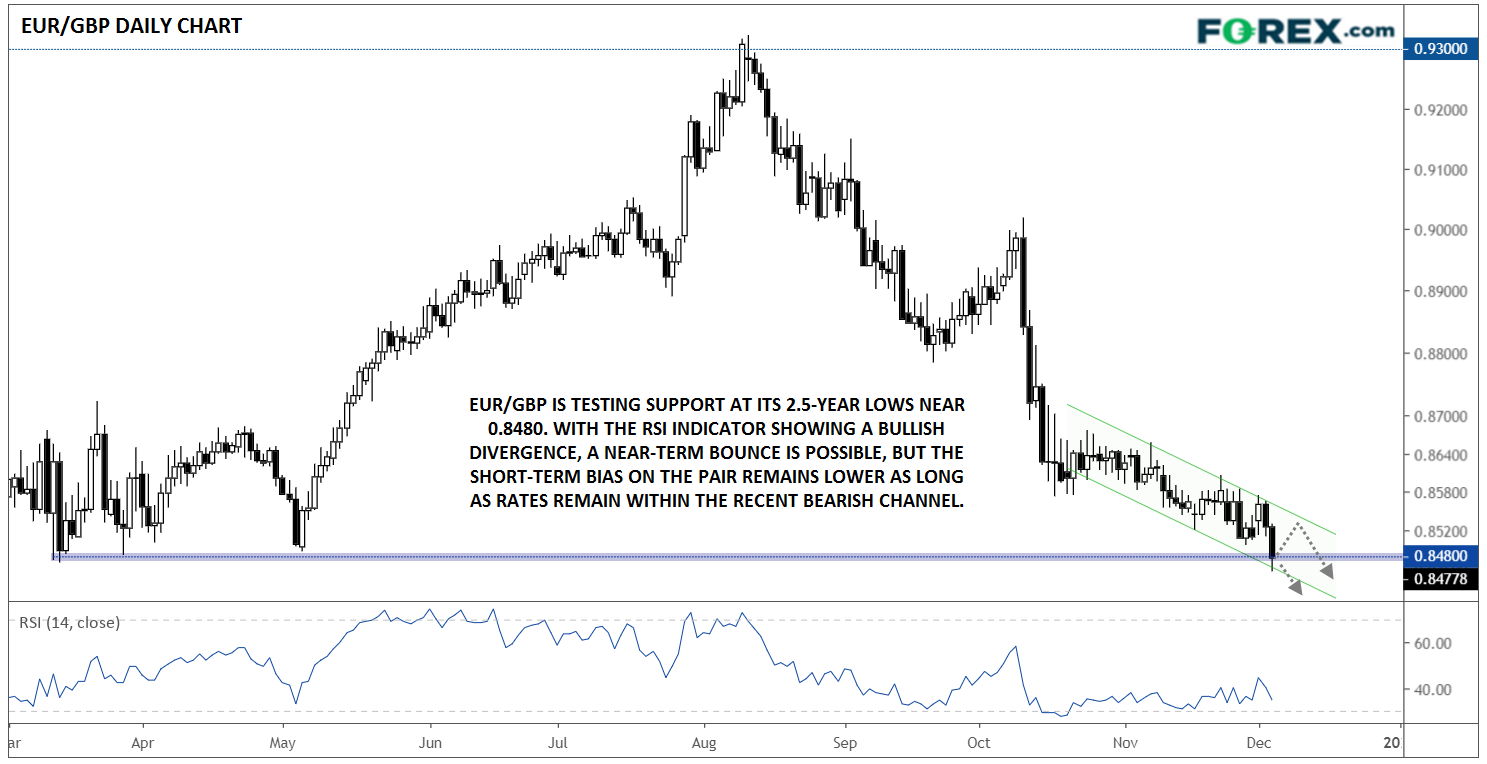 As the chart shows, EUR/GBP is testing strong previous support just below 0.8500, and with the relative strength indicator (RSI) in a persistent state of bullish divergence, there’s a case for a small recovery in the latter half of this week.

Taking a step back, the longer-term bias clearly remains to the downside. Accordingly, readers may want to consider short opportunities on bounces toward the top of the recent bearish channel near 0.8530 or on a confirmed close below 0.8480 support, especially if opinion polls continue to show the Conservatives with a comfortable majority. Below that key area, there’s little in the way of relevant support until the May 2017 lows just under 0.8400 and the April 2017 trough around 0.8300. Only a break above the weekly high at 0.8570 would shift the near-term bias back in favor of the bulls.

Every month, we remind traders that the Nonfarm Payrolls report is significant because of how it impacts monetary policy. The Fed is the “transmission mechanism” between U.S. economic reports and market prices, so any discussion about Nonfarm Payrolls should start with a look at the state of the U.S. central bank.

Last month, we compared the Fed’s announcement of a solidly neutral outlook toward monetary policy to a bridesmaid upstaging the bride (the NFP report) at her own wedding. While we can’t torture the analogy any further, the Fed’s high bar to raising or lowering rates may still tamp down market volatility around this month’s NFP report.

At least this time around we have access to all four of the historically-reliable leading indicators for the NFP report:

In other words, three of the four leading indicators are pointing to a deteriorating labor market. That said, this month’s report may benefit from the 46,000 United Auto Workers returning to General Motors, a temporary factor that hurt last month’s jobs report. Weighing these factors, we believe the odds are tilted toward a slight disappointment in overall job growth, with internal models pointing toward headline job creation in the 130k-180k range, albeit with more uncertainty than usual.

Regardless, the month-to-month fluctuations in this report are notoriously difficult to predict, so we wouldn’t put too much stock into any forecasts (including ours). Most importantly, readers should note that the unemployment rate and (especially) the wage component of the report will also influence how traders interpret the strength of the reading. 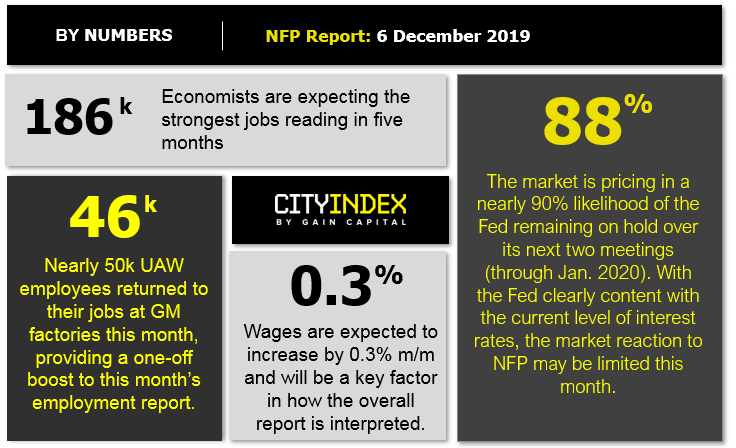 See wage and job creation scenarios, along with the potential bias for the USD dollar below:

In the event the jobs and the wage data beat expectations, then we would favor looking for short-term bullish trades in USD/JPY, which remains in a near-term uptrend and is testing support in the 108.00s. But if the jobs data misses expectations, then we would favor looking for bullish trades in NZD/USD, which recently saw a major breakout to 4-month highs and may have further to run from here.