Volatile news like the expansion of the Coronavirus can create market whipsaws, warns Jeff Greenblatt.

The number one challenge I hear from traders these days is how to deal with markets that change direction every few days. The year started with a bang of a geopolitical event, the assassination of Iranian General Soleimani. Stocks and oil made big near term moves immediately but just when it looked like a wider war could develop, the smoke cleared and the dust settled.

A couple of weeks later, the Coronavirus appeared on the scene. Markets turned a little volatile again but did not panic. Now we are dealing with the fallout. Last week we learned about factory and store closures throughout China. Major cities were quarantined and while none of us were there, it had a 1918 Spanish influenza feel to it. For now, it appears people are starting to go back to work even as millions are still under quarantine. The problem, as we know it, is with the incubation period. Authorities do not know for sure if the virus is going to flame out or if we’ve just seen the first wave.

What we can anticipate down the road are supply chain disruptions. We’ve already seen Tesla (TSLA) take a major hit, giving back have of its recent surge. But on somewhat of a smaller symbolic level the Sunday New York Post mentioned the National Hockey League has a Coronavirus problem. It seems that hockey sticks are made in China. You didn’t know that? Neither did I. But the NHL says at the rate players break sticks these days, they barely have enough of a supply to get through the end of this season. Now consider a super chain like Wal-Mart (WMT) where just about everything comes from China.

What appears to be going on is a slow-motion black swan event. Instead of a one-off type event like 9/11, this one has the potential to hit financial markets and the global economy in waves.

Traders who like to take swing positions are having an extremely rough time navigating these rough seas. What should one do about this?

Here’s the bottom line, nobody has a crystal ball and there is no such thing as the holy grail. Nothing is guaranteed when it comes to financial markets. But those who get in early have the staying power, those who do not end up like a deer in the headlights. As nice as the market is behaving today, nobody knows if the news coming out of China tomorrow is going to be bad or even catastrophic. The best you can do is dial up your ability to manage the risk/reward ratio.

Everyone should be using stop losses and know where (what price) you are wrong. But that’s only half the battle. If you are taking a position in a stock, you need to enter as close to the turning pivot as you can. But how do you know where that is?

By using a proxy. If you are trading stocks, try to find one that is closely correlated to the overall market. You may never trade the E-mini, but it’s an incredibly good proxy for the market. In fact, it slightly leads the overall market. If you like tech stocks, follow the Nasdaq 100. If not, the Dow Jones futures (YM) and E-mini S&P 500 (ES) will work just fine. The market has several trends within each week. One of the best ways to navigate the trend is to follow the E-mini on a 30-minute time frame as many moves originate out of that setup. If the worst case scenario develops, the worst that can happen is you lose small.

Those of you who have followed this column know the methodology here is the Kairos price and time square out vibration. Of course, it would require you to understand how to do it. But if you have a different means of navigating the market, you can still use the E-mini, but you need to be able to navigate a 30-minute chart. When the pattern changes on a 30-minute chart, odds favor the entire market moving along. It only takes an extra few minutes to navigate the E-mini.

Last week we talked about the oil chart bottoming. It spent the whole week bottom feeding but it has finally held the low and has begun making a thrust higher. It’s still hard to say how far any rally can go but at least it’s trying. Finally, we see precious metals moving in the same direction as the U.S. Dollar Index (see chart below). No doubt, it’s strange. Let’s look at the long-term Greenback chart. 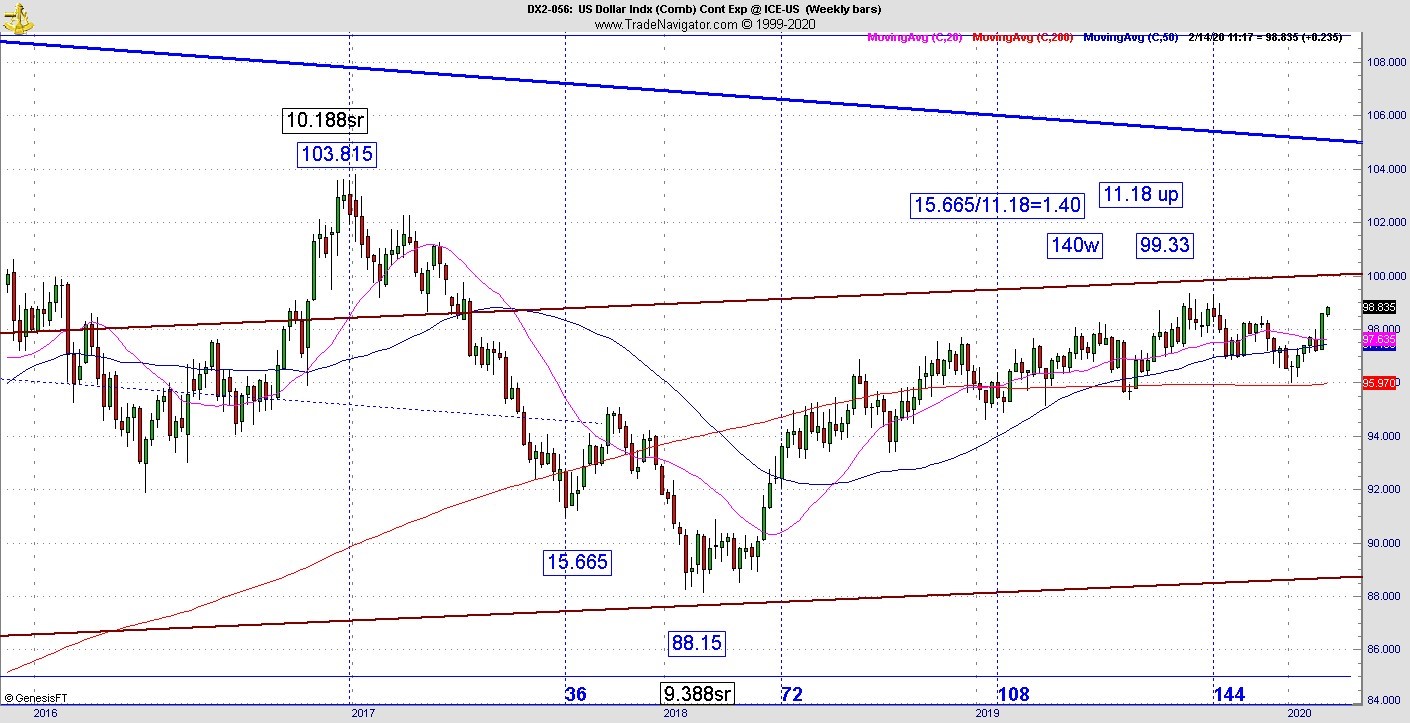 There is a very interesting reading for the high in the U.S. dollar dating back to September. It appeared it was good enough to be a longer-term top but it’s not working out that way. As it turned out that calculation was 15.665 down and 11.18 up. The ratio is 1.40 and the entire sequence was 140 weeks which gave us the reaction. That pivot is now to be tested. If it violates, the Greenback could go considerably higher. On the other hand, these calculations do have a way of holding, even at the last minute. This is likely one of the most important upcoming tests in all financial markets.

Stocks Lower Ahead of Chancellor’s Summer Statement
9 hours ago

Charging Ahead: The Future of Digital Credit
13 hours ago