The U.S. 30-year Treasury bond futures market has been trading sideways for six months, and could be nearing decision time, writes Al Brooks.

The 30-year Treasury bond futures had an inside bar last week on the weekly chart (below). Last week was an outside bar. This is therefore an ioi (inside-outside-inside) Breakout Mode pattern. 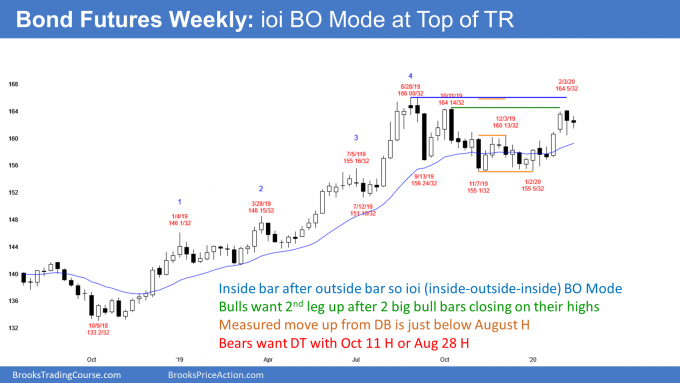 The bulls see the two big bull bars at the end of January as a breakout above a four-month bull flag. For them, the past two weeks are forming a pullback from that breakout. They expect the bull trend to resume either next week or the following week. They would like a break far above the August all-time high.

However, as mentioned before, Americans will not accept negative interest rates. If this rally continues much higher, that is what Americans will be facing. Politicians know that and they will prevent it from happening. How? They could print money to create inflation or they could greatly increase the sale of bonds. That supply would drive the price down. There are other things they could do as well.

It is important to note that the bond market formed a nine-year nested wedge top on the monthly chart in July 2016. The current rally is testing that high. A test of a wedge top happens about half of the time before there is a reversal down.

The bulls want a strong break above the wedge top and then a measured move up based on the height of the four-year range. There would normally be a 50% chance for the bulls. But this is not normal. Americans will not tolerate much lower interest rates. Consequently, there is probably less than a 40% chance that the 2019 rally will continue far above the 2016 high.

The monthly chart had four consecutive bear bars since September after the 2019 buy climax. Even though January was a big bull bar, it would be unusual for a bull breakout above four bear bars after a buy climax to lead to a resumption of the bull trend. More often, the rally lasts one to three bars (months) and turns down from around the prior high.

January was a surprisingly big bull bar on the monthly chart. A bull Surprise Bar typically will have at least a small 2nd leg sideways to up. As a result, even though February so far is a bear bar, the bond market will probably be sideways to up for at least another month or two. This is true even if March trades below the February low.

I want to add to our Income Portfolio with two new recommendations, both of which are exchange-trade...

Bond futures are bouncing from the first reversal from a buy climax. Traders should expect a lower h...