Are Treasury Bonds Still A Buy?

On Monday, the major stock indices in the US were all down at least 7% for the day. It was the largest one-day drop since 2008, the year the Great Financial Crisis started. This time around it's not subprime loans causing the meltdown, but a highly contagious virus and an oil price war.

While stocks have gotten hammered the last couple weeks, Treasury bonds essentially went straight up. On Feb. 24, when stock selling really started to pick up, iShares 20+ Year Treasury Bond ETF (TLT) was trading around $150. On Monday, March 9, it reached as high as $179.70. That’s nearly a $30 gain in two weeks or up 20%. (Who said bonds can’t be volatile?)

Bonds, at least government bonds, have been one of the few safe-havens investments that have performed well during the market meltdown. Even gold has taken something of a beating— and don’t get me started on Bitcoin.

After Monday’s steep decline, the entire U.S. Treasury yield curve was under 1%. Yes, even the 30-year bond was yield under 1%, although it’s back to 1.28% as I write this. Investors are more concerned about keeping their money safe than earning a yield. That’s what happens during a crisis.

So, the question is, what's next for bonds? Despite the huge spike in bond prices, is it possible TLT can go even higher? For clues, one of the best places to look is the options market. That's especially true for TLT, which has a 90-day average of 11.7 million traded per day.

Looking at options block trades in TLT (the biggest trades by volume), and there’s at least one big trader who doesn’t think TLT is done moving higher.

With TLT trading just under $170 (after pulling back from the highs the day before), a trader purchased 800,000 shares while simultaneously selling the Sept. 18, 178 calls for $9.55. That amounts to $7.6 million in premiums collected or a 5.6% yield over the next six-months (not including any dividend from TLT).

So why do a trade like this, a covered call, when the market is so volatile? First off, this trader is likely assuming that bond prices are going to remain high for the foreseeable future. Given a possible recession on our doorstep, interest rates will almost certainly remain depressed.

With downside risk less of a factor, the trade was likely made not so much for upside potential (although the trade can generate another $8 in stock appreciation), but to collect that $7.6 million in cash. That’s a decent amount of capital that the trader can potentially redeploy to other strategies. 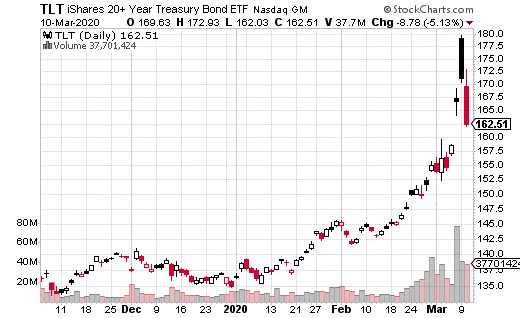 Placing a TLT covered call in this type of market is a relatively safe strategy because the downside risk is likely minimal (to a point). It’s difficult to say how high TLT can go because we’ve never really been in this situation before in the United States. However, with calls trading at elevated levels, collecting some cash by selling premiums is a reasonable way to generate income at current levels.

As you can probably know, this trade is a loser right know as TLT tanked after the Federal Reserve pledged to add $1.5 trillion in liquidity to the bond market. However, with the cash in hand from the calls, it is not a disaster and could be replicated at a much lower level.