The FTSE and European markets are following Asian markets overnight and tanking lower. Risk aversion is back with a bang, even after the Federal Reserve threw the kitchen sink at shielding the U.S. economy from Coronavirus.

These moves will go some way to easing potential blockages in the system. However, the markets still tanked on Monday. This is because the market does not consider that the moves by the Fed and other central banks across the globe will sufficiently compensate for the economic hit that is coming from the necessary steps to combat the Coronavirus outbreak.

More countries are closing their borders, more people are in lock down or isolation or quarantine and businesses are grinding to a halt.  The supply shock demand shock will be unprecedented, and airlines are already warning that they may not survive this crisis. Central banks across the globe have thrown what they can at the problem. However, the markets don’t consider it to be enough. Policymakers now need to step in to pick up and show that they can not only prop up the global economy but also stop the pandemic. G7 and G20 policy responses will now be in focus.

Fear in the driving seat

Fear is driving the markets. We have seen that policy moves so far have done little to stem this fear. The markets are unlikely to start showing signs of recovery until there is an improved prognosis surrounding Coronavirus or until data out of China starts improving. This is likely to be a long way off yet given the dire Chinese data overnight. Chinese industrial production output fell to its lowest level on record in the first two months of this year after coronavirus brought the world’s second largest economy to a halt. 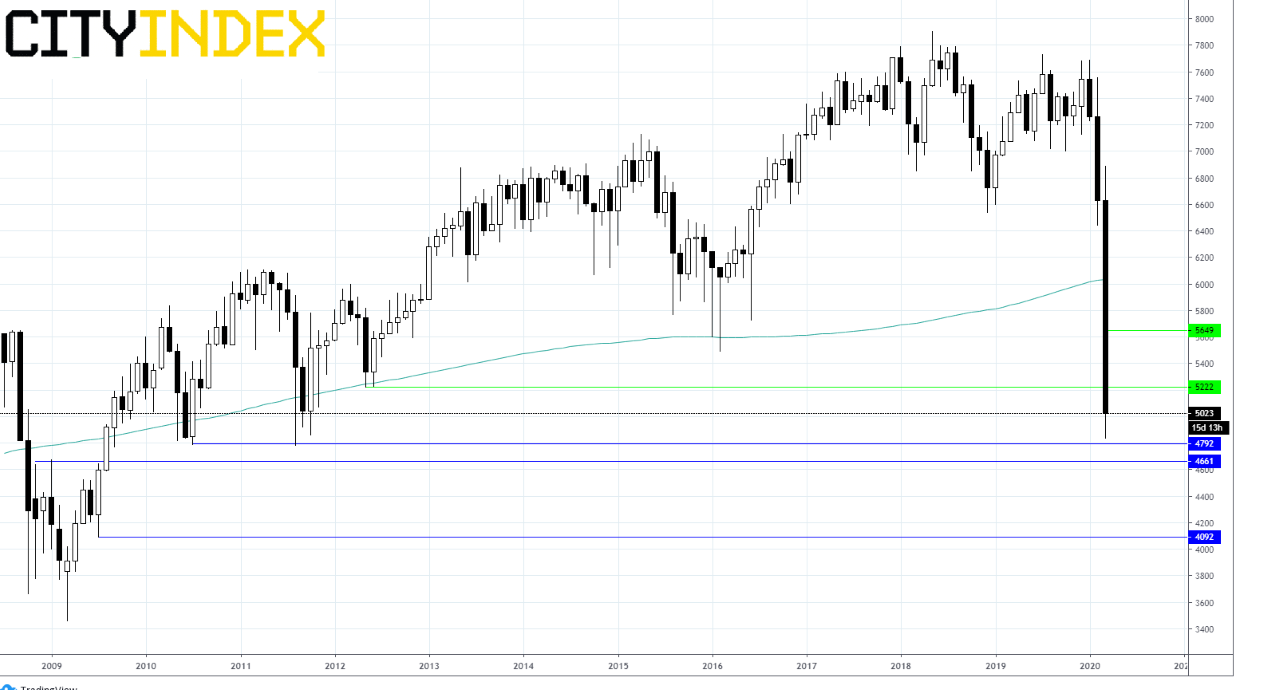 With more countries closing their borders and restricting movement the impact on the aviation industry will be unprecedented, worse than 9/11. The same industry which helped spread the virus is also being hit the hardest by Covid-19.

Over the weekend, President Trump added the UK to list of countries from which it will no longer accept travelers. Italy has also closed its borders, Spain and Germany among other countries have imposed stringent measures preventing travel in a bid to control the spread of Covid-19.

The speed and the depth of the impact on the aviation industry is breath taking. British Airways parent International Consolidated Airlines Group SA (IAG) axed 75% of its flights as EasyJet PLC (EZJ) and Ryanair Holdings (RYAAY) grounded air crafts, with the latter saying it could ground its entire fleet; TUI has suspended most of its operations as the industry struggles to survive the impact of the flight restrictions and waning demand.

Unions are warning that thousands of jobs could be wiped out as global airline alliances call on governments for intervention to shore up an industry that staring down the barrel to collapse.

This is no longer the smaller players like Flybe which are being hit. British Airways has also indicated that there is a chance that it won’t survive extended travel bans. On March 5 the International Air Transport Association (IATA) predicted that a possible hit to worldwide aviation revenue would be in the region of $113 billion this year. That equates to around 20% of last years’ revenue.

The pain of the industry is clear in share prices. European and U.S. air carriers have dived at a faster rate than the broader stock market. British Airways parent company IAG has plunged 70% over the past three weeks while the FTSE has shed 37% at the time of writing (see chart). 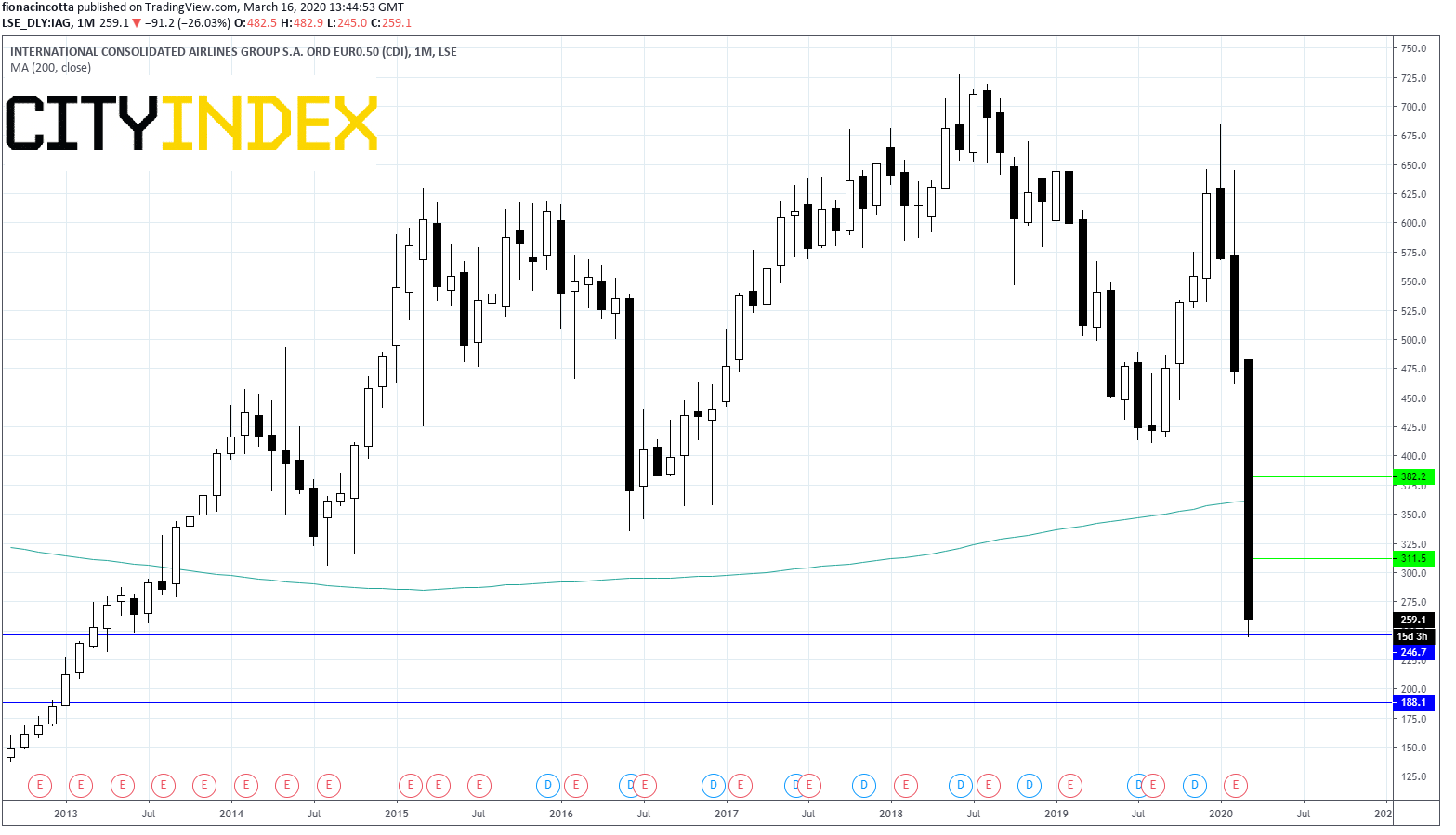 We all know not to try to catch a falling knife. A rebound in aviation stocks depend largely on the duration of the outbreak. Most airlines should survive if the travel restriction and low booking levels are for just one or two quarters.

Some carriers, such as Cathy Pacific are already showing early signs of life. Hong Kong arrivals were heavily affected by the Coronavirus outbreak with 80% of the fleet grounded on travel restrictions and waning demand. However quick smart action has seen the spread of the virus and the fatality rate come quickly under control. The number of flights are cautiously increasing. Using past outbreaks as a guide tourism and leisure travel return fast after a virus outbreak, potentially as soon as the summer, easily stimulated by fare sales.

Business travel, however, could see more permanent changes as companies cut right back and focus on teleconferencing over business travel.

It is still too early to call the bottom on airline stocks. This could well get worse before it gets better. IAG has dropped 70% but the outlook is not 70% worse today than at the start of the year. Let's not forget IAG made £2.89 billion ($3.54 billion) operating profit last year. The share price drop is a drop driven by sentiment rather than financials. There will be a time for hunting Airline bargains. But it is not quite yet.

Norwegian Air is particularly at risk, potentially only surviving the next few weeks.

Delta (DAL) is in a strong position as a highly profitable airline.

Americans in some states are starting to see their economies open and it probably won’t be too...

Can I really be recommending an airline stock — especially after Warren Buffet just got done s...

We are upgrading Harley-Davidson (HOG) to reflect our positive view of the company’s new strat...