How Long Will Crude Oil Be This Cheap?

The financial world had quite a shock last week when crude oil prices dropped into negative territory for the first time ever. While the price of the front-month oil futures contract is no longer negative, it's still trading at just over $13 per barrel. With the exception of last week, the price hasn't been that low since the 1990s.

Considering this, I’ve seen a lot of people asking the same questions: What does a negative price even mean? And how long can we expect oil prices to remain this low?

Negative prices can essentially only happen with a physical commodity (interest rates can also be negative, but if you imagine cash as physical currency instead of an electronic one, the premise is basically the same). Negative prices just mean sellers/suppliers have to pay someone to store their goods.

In the case of crude oil, supply is vastly greater than demand right now. Oil demand has plummeted amid the COVID-19 pandemic as many people are stuck at home. (I’ve only filled my gas tank once in the past two months.) With no place for suppliers to store oil, they have to pay buyers to take it off their hands.

So, in some ways, the first question informs the second. Because as long as we can expect supply to outpace demand, it’s certainly possible oil prices will remain at rock bottom levels for the foreseeable future.

Even when the pandemic eases, which could be quite a while in many parts of the world, you can expect a lot more people to continue working from home. Corporations are finding that they don’t necessarily need to pay to have so many people jammed into offices when their employees can be perfectly effective at home.

Plus, it will take a while for the population to resume pre-pandemic behavior. That means travel— both through the air and on the road— will likely be slow to return to normal levels.

A very large trade in the United States Oil Fund LP (USO) implies that oil could be cheap until 2022. USO is a popular method for trading crude oil. The exchange-traded fund tracks oil futures, primarily of the short-term variety.

Using the 5.5 strike means that the trader can only make money on stock appreciation up to $5.50, or $3.36 from the current price. That’s a lot from a percentage standpoint, but nowhere near where USO has been recently (it was $12 earlier this year). 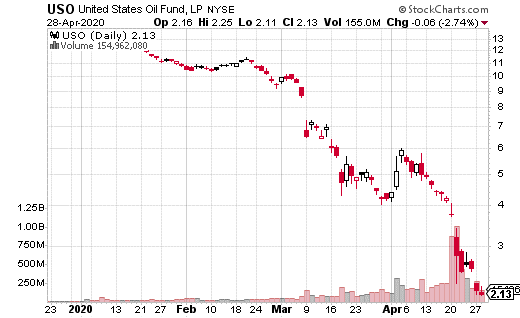 Is USO capped at $5.50 for the next year and a half? This trade at least hints at that possibility. Being a covered call does mean that some upside potential is exchanged for income from the short call. In this case, the yield on the call is 17.3% over the life of the trade (about 20 months).

That's not a bad yield in this environment, even over 20 months. There's also limited risk in this trade, given how cheap USO is. However, there may be some counterparty risk since it wouldn't be the first time a major ETF/ETN has blown up. If you are willing to take a chance that USO could recover to some extent by 2022, this is a reasonably safe trade to make.

Jay Soloff is the Options Portfolio Manager at Investors Alley. He is the editor for Options Floor Trader, an investment advisory bringing you professional options trading strategies, with all the bells and whistles of Wall Street, but simplified so all you have to do is enter the trades with your broker.

With crude rebounding the extension of OPEC+ production cuts could be at risk, reports Phil Flynn....

Gold is the traditional safe haven in volatile markets. But silver prices tend to rise even faster o...