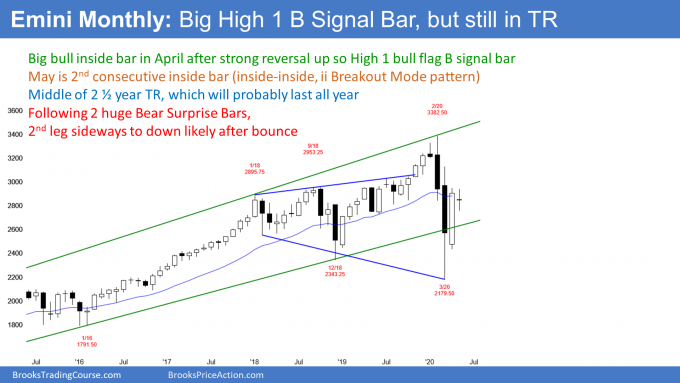 The E-mini S&P futures chart formed a big bull inside bar closing on its in April on its monthly chart (see below). This is after a two-bar pullback in February and March. May is currently also an inside bar. If May remains within April’s range, there will be an inside-inside (II) Breakout Mode pattern.

April is a High 1 bull flag buy signal bar in a 12 year bull trend. If a trader only looks at the monthly chart, he sees a good buy setup. Traders want to know what is above the April high.

The bulls know that the two big bear bars make a second leg sideways to down likely. However, April was such a strong reversal, traders know that the odds favor at least a little follow-through buying in May.

The bulls want to trigger the buy signal. There is enough room above the April high and below the February high for them to make a reasonable profit. They therefore have bought both three-day pullbacks in May, even though this week’s selloff was strong.

Where will the bears sell?

What about the bears? They would like to prevent the buy signal from triggering. Therefore, they sold this week just below the April high. If they can keep May within the April’s range and have May close near its low, May could be the start of the second leg down from the high.

More likely, if they are unable to stop the buy signal from triggering, many will buy back their shorts. That would probably lead to at least several days of higher prices. The rally would probably go about 50 points above the April high before the bears will try again to get their second leg down.

The E-mini futures reversed down from the 20-week exponential moving average two weeks ago on the weekly chart (see below). At the time, I said that the reversal would probably last only two to three weeks because it was coming after a six-bar bull micro channel. 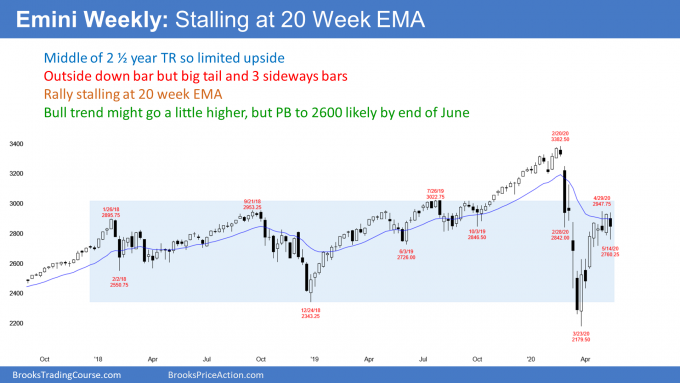 That is a sign of very aggressive bulls. For six weeks, they bought above the low of the prior week. The pullback was mostly sideways and it lasted only two weeks.

There are now consecutive reversals down from the 20-week exponential moving average. But the week closed in the middle of its range. The bears were unable to get the week to close below last week’s low and at the low of the week. This week therefore was neutral.

Is the six-week bull trend resuming?

Traders are still deciding if the rally up from the V bottom will continue higher or reverse down from the 20-week EMA. It might take a few more weeks to become clear.

If next week goes above last week’s high, but then reverses down, there would be a six-week micro wedge top. That could lead to a reversal down for several weeks.

The rally has been exceptionally strong. A tight bull channel does not typically immediately reverse into a bear trend. Consequently, even if the bears get a selloff to below 2600 in May or June, the bulls will buy it. They expect at least a small second leg up after a very strong rally.

The E-mini futures reversed down from a wedge top on April 29 on its daily chart (below). But the six-week bull channel was tight. That made the first leg down likely to be minor. 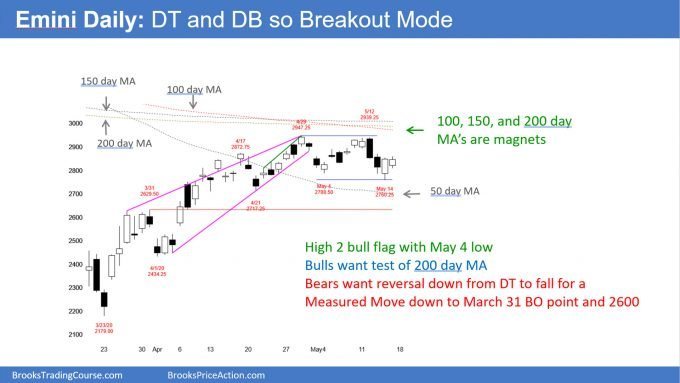 The E-mini rallied back to the April high this week. When there is a wedge top and the bull channel is tight, there is a 50% chance of a rally to above the wedge before there is a bear trend. The bulls tried early this week and failed. They have been trying again on Thursday and Friday.

The bears want the two-day rally to reverse down from below the May high. There would then be a second lower high. That would increase the talk of a possible early bear trend.

Even though the daily chart has been sideways for a month, traders know that it is overbought. They expect a 10% to 20% pullback to begin in May or June. Traders are deciding if it has already begun or if there will be one more leg up first.

Support and resistance are magnets. Like all magnets, when you get near, the magnetic force increases. It is hard to avoid getting pulled to the magnet.

The 200-day moving average is widely followed by institutional traders. It therefore is an important magnet. The E-mini was nearby on Tuesday. It might have been near enough so that it cannot go down without first testing at least a little above it.

But to go above it, the E-mini would also have to rally above the April high. That is the top of the wedge. Theoretically, the bears will get stopped out above that high.

Some bears will exit, but others will be looking to sell around the 200-day moving average. They are betting that the March reversal will not make a new all-time high without at least a 50% pullback first. They currently have a 70% chance of being right.

I have been saying since the March low that the March 3 high was a potential target. The E-mini is close enough so that it will probably get near it at some point this year. What we do not yet know is if the current rally will continue up there or if there will be a reversal down to 2600 first.

The bulls are hoping that the reversal up from the V bottom will be like last year’s bull reversal and lead to a new high this year. They have only a 30% chance after the 35% selloff. Therefore, traders expect a pullback before then.

If there is a deep pullback, traders will conclude that the April rally was a bull leg in the 2.5-year trading range. Trading ranges typically disappoint traders hoping that a leg will grow into a trend. The legs up and down usually go beyond important support and resistance before reversing.

For example, if the rally breaks above the 200-day moving average this month, there will probably be a reversal down. That would disappoint the bulls.

The March 31 high is an important breakout point

But I believe that the rally is really just a bull leg in a trading range. If so, there should be a reversal down that closes that gap and disappoints the bulls.

That March 31 high is 2629.50. If the E-mini falls below it, the selloff will probably test the next nearby support. That is the 2600 Big Round Number.

To get there, the E-mini would have to fall below 2706.00. Why is that important? Because it is 20% down from the all-time high. If the E-mini drops below it, the news will be that despite the huge rally, the E-mini was back in bear market territory.

The E-mini has been sideways for a month. Traders know that they will not get a new high this year. But they do not know where this current rally will end. It might have ended with the April wedge top. However, if there is another leg up, it will probably fail around the 200-day moving average and the 3,000 Big Round Number.

The month-long trading range means that the bulls and bears are balanced. There is a 50% chance of one more leg up to the 200-day moving average before a move down to 2600. There is also a 50% chance that the move is already underway.

Harry Boxer of TheTechTrader.com gives his insights on three breakout stocks and their chart movemen...