The Dollar Is Flirting With Disaster

The U.S. dollar is flirting with disaster so how long can the Fed hold up markets, asks Jeff Greenblatt.

The U.S. dollar is flirting with disaster. Don’t believe me, have a look at the chart for yourself (see Below).

Recall, we’ve discussed in this space how the US Dollar had a 144-month peak and found that high right on the Gann master change point on March 23. 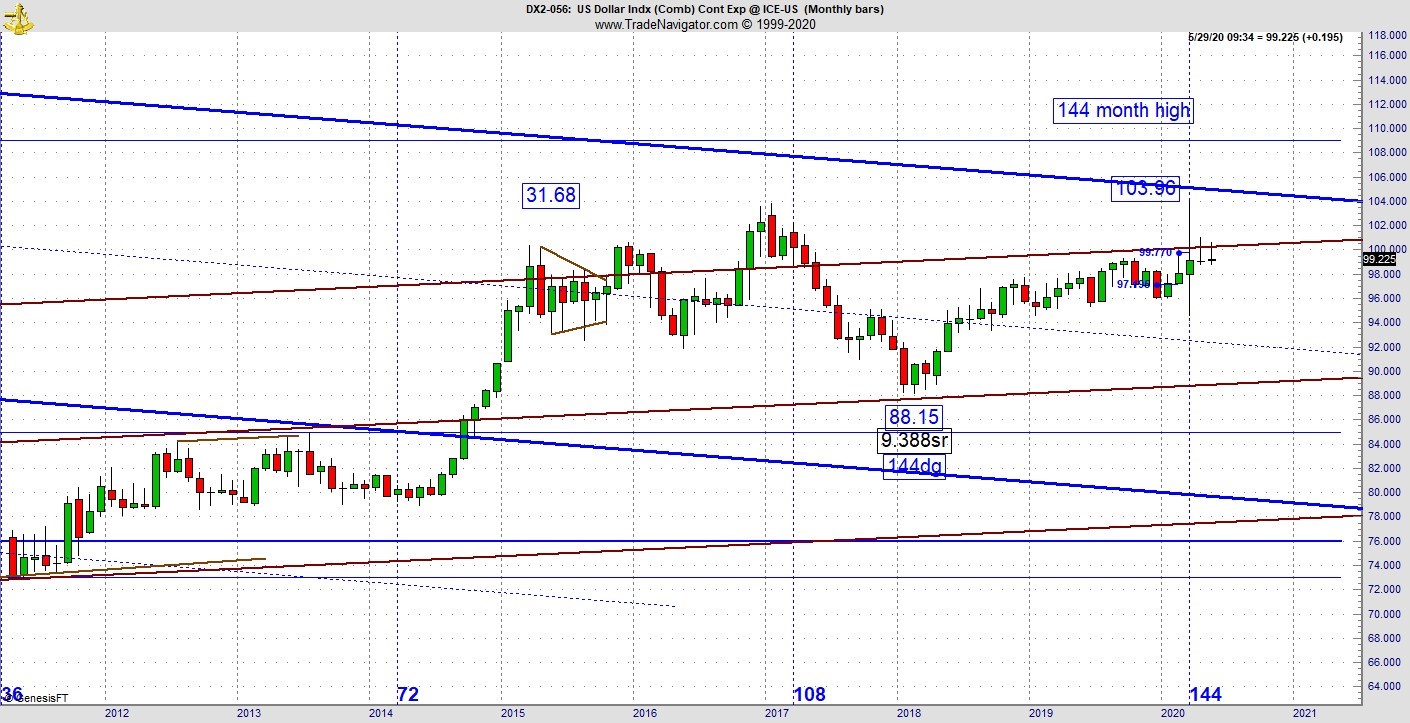 Today I have the monthly chart where the high came in on a classic high wave candle (tails on both sides with small real candle body). What that means is a loss of conviction. A smaller upper tail materialized in April. Now as we go to the daily chart, we’ve seen the action wedged two key magnet lines (the lower is the trend line dating back to the 2018 low) for the better part of the past two months (See below) . Right now, it’s hugging the lower magnet line after it traced out an 84% retracement after a bounce of 1.84, a perfect Kairos reading. Is it going to break? 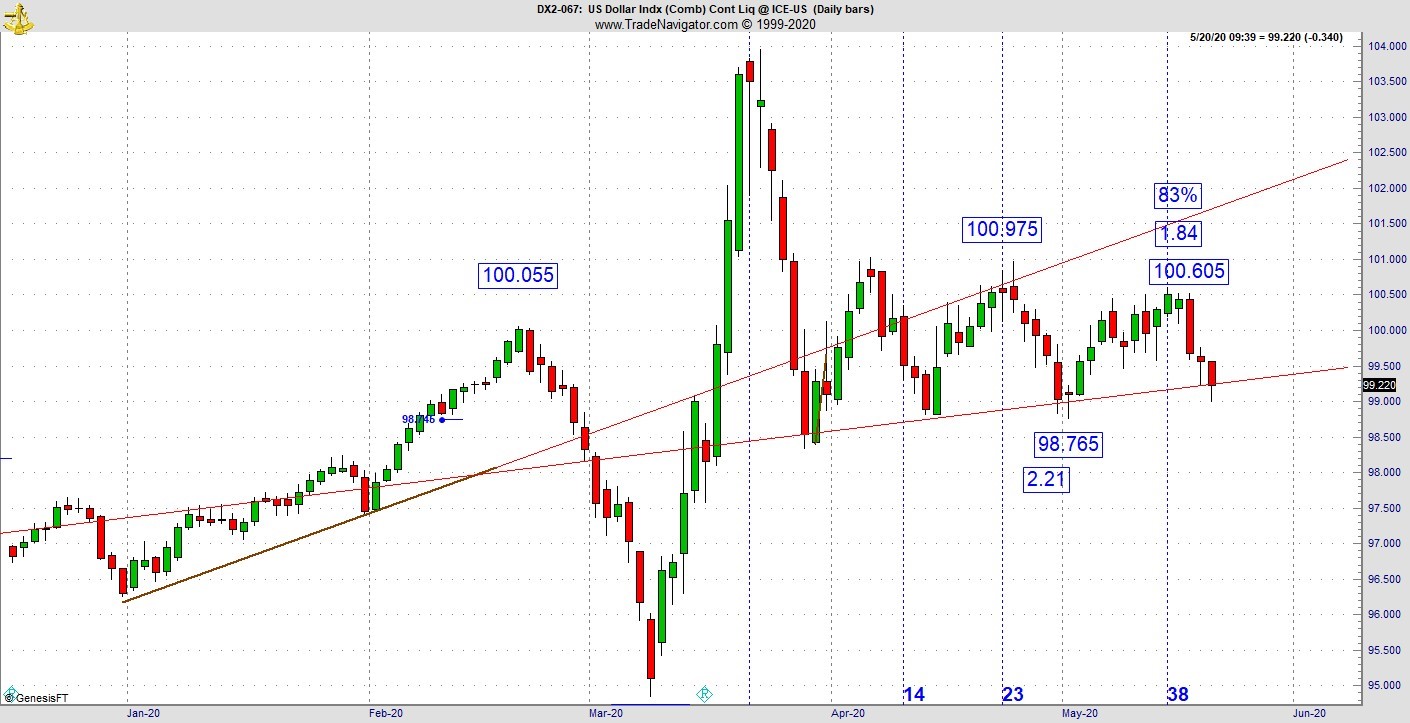 We don’t know, that’s why its not a prediction but we can see the danger. If this level crumbles the first stop should be the March 9 low near 95. Following this hypothetical scenario, if that breaks, we are looking at a move down to the September 2018 low near 91. That would be a 12% drop off the top. Of course, if it goes, it wouldn’t get there in one fell swoop, that’s not how markets work. It might get to 95 quickly but would likely bounce or go sideways at some point.

So, you must ask yourself why wouldn’t it happen? California has a task force now asking for a $1 trillion bailout for local governments in order to reopen its economy. What’s a trillion or three between friends? It’s clear they are hyperinflating the currency to deal with the massive debt balloon and the only reason the Dollar isn’t lower now is they’ve turned off the velocity.

I continue to use pro sports as a proxy which to this point has lost roughly $12 billion. If they roll out social distancing in a stadium or arena (if they ever allow spectators back into the building) the best-case scenario is stadiums filled 33-50% of capacity. Remember my discussion concerning the salary cap prior to the shutdown on March 12? If this is the ‘new normal’ when I connect the dots, I can see any number of small market teams folding for good. Here in Arizona, the Coyotes have lost tens of millions since they moved to the arena in Glendale on the outskirts of town. They have a new owner looking to build an arena which would be centrally located. An NHL arena can cost anywhere from $200 to $500 million.

The new Seattle arena which is a redevelopment project is now estimated at $850 million. To make these projects work, its obvious they are counting every seat, which includes luxury boxes and high-end ticket sales. Nobody has said anything, but I can see the virus finally finishing off hockey in the desert. No new arena, the team will have to leave. Tell me which city is in a position to build a $500 million structure right now? I just got done telling you local governments in California need a trillion to stave off collapse.

Nevertheless, the stock market is higher and you know why. The plunge protection team on steroids supported by the Fed is doing most of the buying. The SPX is now higher as last Thursday’s low is 61 days off the top (see chart below). The market was up big on Monday as Moderna reported positive data on an early stage vaccine trial. Last Friday Trump announced he was hopeful a vaccine could be available by the end of the year. There are two problems here. On Tuesday a leaked Pentagon memo announced any vaccine would likely not be ready until the second half of 2021 according to TaskandPurpose.com. The other problem is about a third of the population will refuse to take any vaccine. 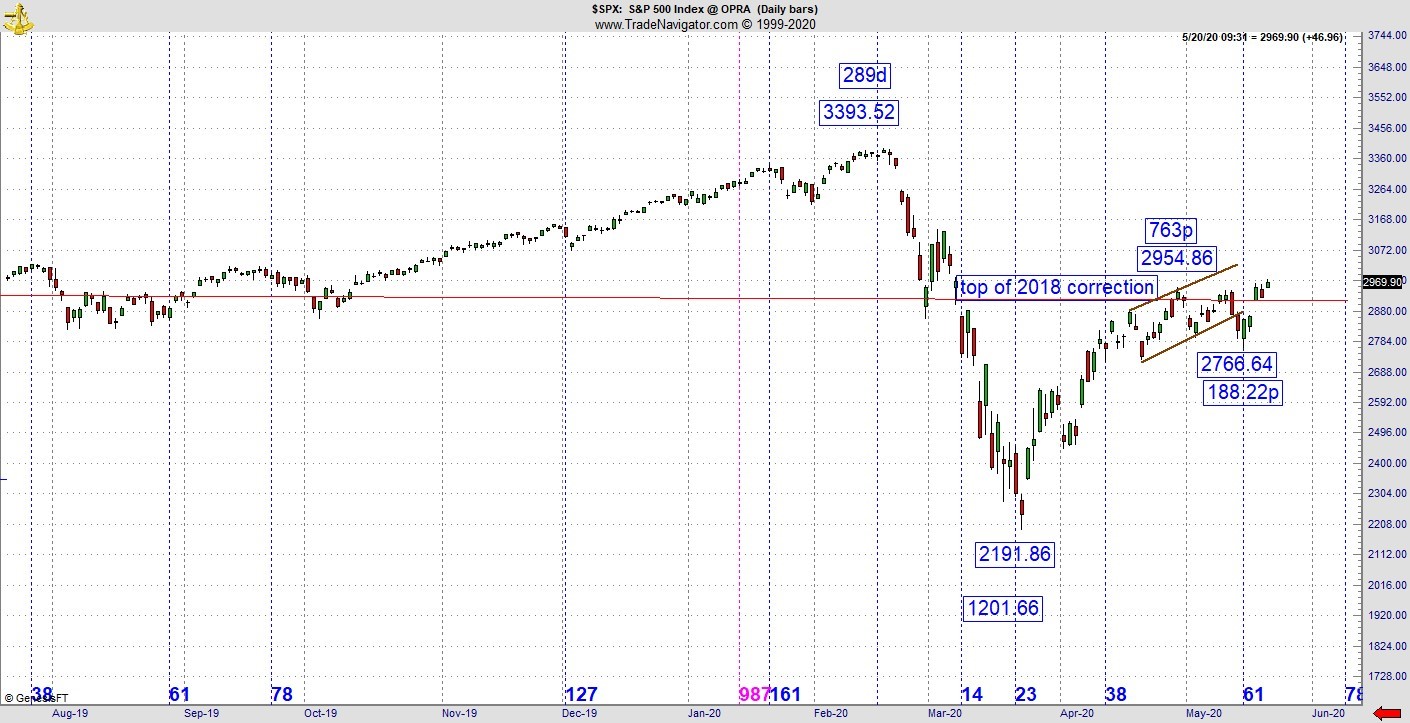 I’m not going to get into the efficacy of any vaccine in this column. What I am going to say is I believe President Trump is now attempting to manipulate the market higher the same way he did for a year and a half with the Chinese trade war and we know how that turned out. He knows the majority of the population is in favor of the vaccine so when he wants to jawbone the market higher, all he needs to do is dangle the vaccine carrot as opposed to the Chinese trade deal as that ship sailed a long time ago.

In summary, from Fed backstopping everything in sight to Trump’s jawboning, they will do everything in their power to keep the market elevated despite the fact the economy is operating at Great Depression levels. There is no real economy and one isn’t likely to materialize any time soon. Trading as opposed to investing is still the best way to go. This is a market where shorts continue to get crushed while it seems insane to bank on a bull move higher.

Markets/Sectors to Focus on in Trying Times
6 hours ago

D.R. Horton: Homebuilder With a Big Footprint
11 hours ago

Okta: Cyber Security in a Telecommuting World
11 hours ago

The world of big business is obsessed with identity. And in this age of telecommuting, knowing exact...