Bond Bulls Are Biding Their Time

Why a test of the highs in the long bond will take close to a year, explains Al Brooks.

The monthly bond futures chart has an Inside-Inside (II) Breakout Mode pattern after an extreme buy climax (see chart below). It will likely be mostly sideways in a tight range for several more months.

The 30-year U.S. Treasury bond futures market had the biggest three-month rally in the history of the market early this year. It was therefore unsustainable and climactic. 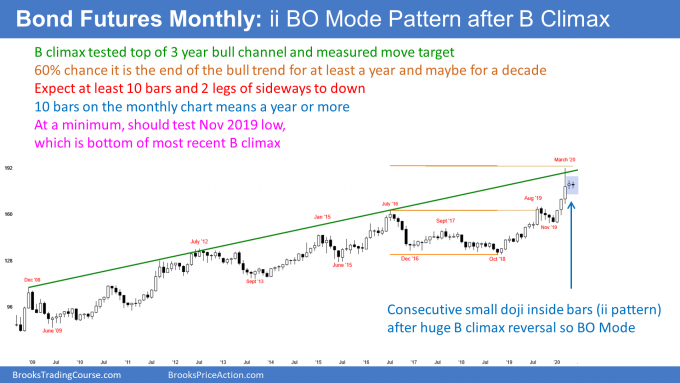 The bond market sold off strong at the end of March. March then closed in the middle of its range. April’s high was below the March high and April’s low was above the March low. April was an inside month.

May so far is within April’s range. This is therefore an Inside-Inside (II) Breakout Mode pattern. That means that the chance of a bull breakout is about the same as for a bear breakout.

With the very small ranges for two months, there is not much energy in the bond market. That reduces the chance of a strong breakout coming within the next few months. If there is a breakout, it will likely lead to more sideways bars than to a trend.

Since the II Breakout Mode pattern is coming immediately after an extreme buy climax, the bulls are not eager to buy. After extreme profit-taking like this, they typically want to wait for about 10 bars (here, months) before they will try to resume the trend.

The bulls want to be sure that the bears cannot begin a trend reversal down. If the bears make two attempts down and fail, the bulls will start to buy. But two attempts typically take about 10 bars, which is about a year.

Any buying before then is usually for a trade. They will take quick profits. Consequently, the upside over the next few months is not great.

What are the targets for the bears?

But what about the downside? There is a 70% chance of a test of the January low before there is a break above the March high. When there is a reversal down from a buy climax, the first target is the bottom of the buy climax. That usually is also around the 20-month exponential moving average. But with the loss of momentum, the bond market might take all year to get down to that January low.

Also, I have said many times that the United States will not have negative interest rates, despite what President Trump wants. Therefore, the odds are against the bond market every going much above the March high. It may never get above that high.