Euro Is in a Breakout Mode

The euro experienced an inside-outside-inside breakout pattern as it stayed below the 20-month exponential moving average, reports Al Brooks.

The EURUSD currency pair triggered an inside-outside-inside (IOI) buy signal this month on the monthly chart. However, it is still below the 20-month exponential moving average, as it has been for two years (see below). The bulls need strong follow-through buying next month to convince traders that the bear trend is reversing up into a bull trend. 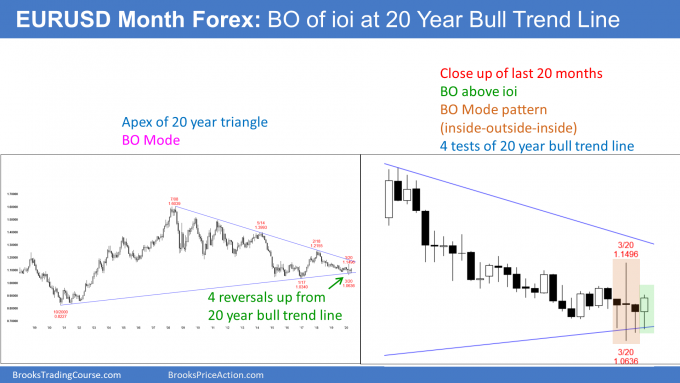 The monthly chart on the EURUSD formed a huge bar in March. Its high was the highest price in the prior 13 months and its low was the lowest price in three years. It was an outside bar. It traded above the February high and below the February low.

April’s high was below the March high and its low was above the March low. Therefore, April was in inside bar after an outside bar. The inside-outside-inside (IOI) setup is a Breakout Mode pattern. Last week, May went above the April high. It therefore triggered a monthly buy signal.

This is not a strong setup. April had a bear body and the past three months were all doji bars. A breakout of a weak Breakout Mode setup has a reduced chance of starting a trend. The bulls will need a big bull bar in June to make traders believe that the May buy signal is the start of a move up to the March high.

If they do not get a strong bull bar, traders will think that the breakout will fail to convert the sideways market into a bull trend. They will assume that the monthly chart will continue sideways for at least a couple more bars. 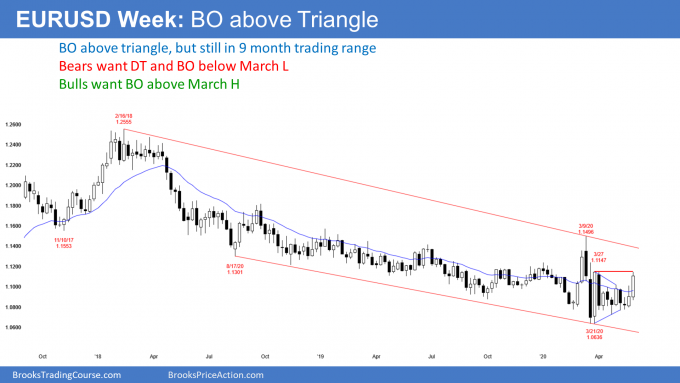 The EURUSD formed a big bull bar on its weekly chart last week (see below). After the strong reversal up from the March low, there was a pullback that formed a small double bottom. It was double bottom bull flag.

The rally this week is a resumption of the March reversal up. The context is good for the bulls. Traders expect higher prices next week. If next week is also a big bull bar, there would be a 50% chance it would continue up to the March high.