Stocks Continue to Rally Despite Turmoil as Emerging Markets Breakout

Stocks continue to walk the wall of worry and Emerging Markets may be preparing for a long uptrend, reports Marvin Appel.

The U.S. stock market continues to recover. For the S&P 500 Index, now down less than 4% for the year, 2020 is now but a blip despite the worst economic contraction and highest unemployment since the Great Depression. And the worst civil unrest since the 1960s. I sure got this one wrong. The only way I can understand what is happening is that stocks are discounting that the U.S. will give up on containing the Coronavirus and will attempt to re-open regardless of any medical consequences.

My optimistic hope is that we will end up like Sweden, which never implemented a strict lockdown. They have had a steady, simmering level of Coronavirus cases for the past two months with fewer new cases each day per capita than in the United States.

Until recently, stock market strength was concentrated in the largest cap stocks, particularly technology names that are heavily represented in the Nasdaq 100 Index exchange trade fund (QQQ). However, in the past three weeks the market has broadened, and previously lagging areas have been outpacing QQQ (see chart below). 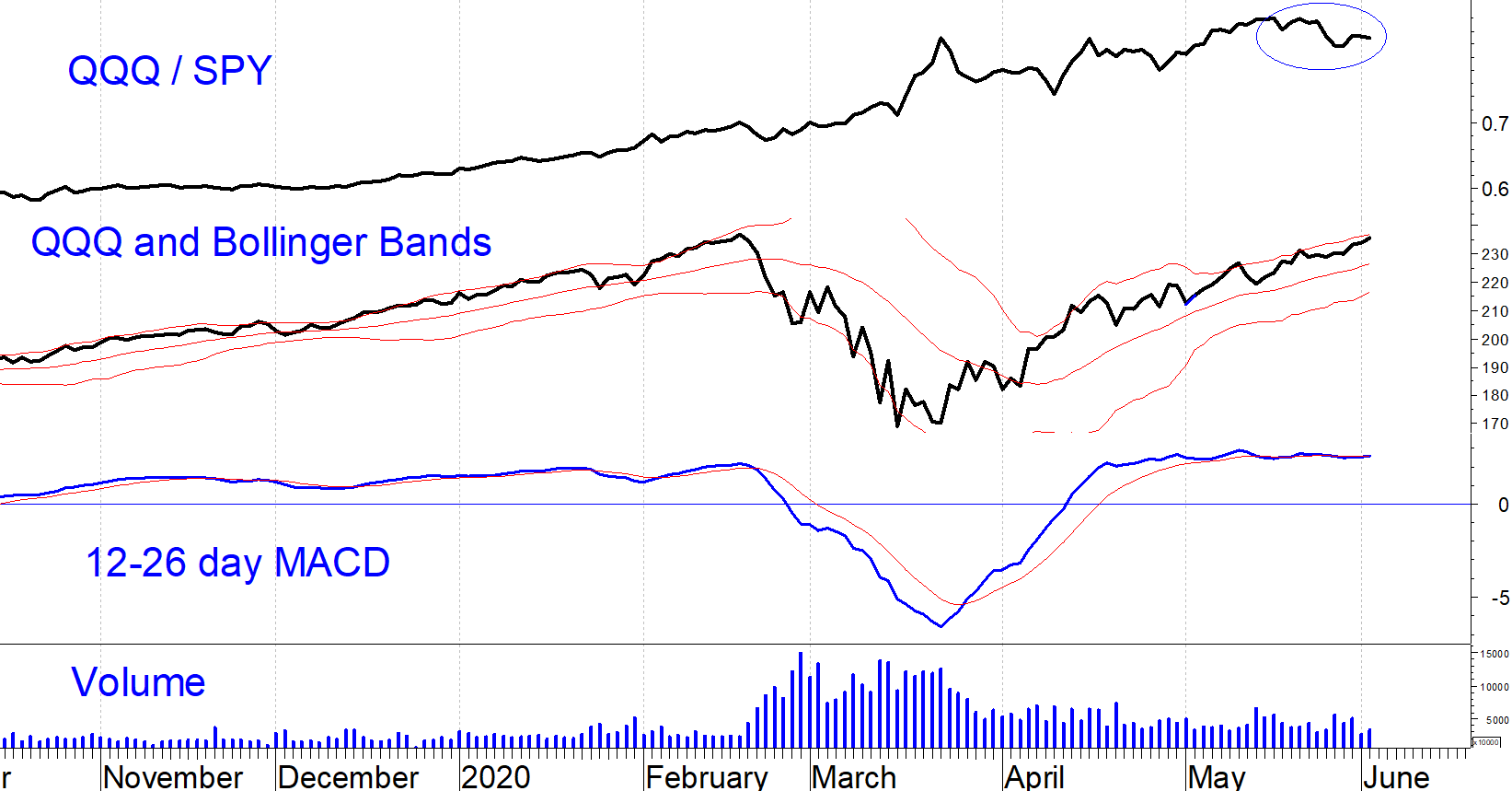 Top: QQQ/SPY shows that since May 15, SPY has been stronger (QQQ/SPY ratio falling)

One previously lagging area the newsletter has been following has been midcaps. The SPDR S&P Mid-Cap 400 ETF (MDY) has lagged SPY and QQQ for most of the past three and a half years. The chart below shows the uptrend in the MDY/ SPDR S&P 500 ETF Trust (SPY) ratio that began at the market low on March 23, but which has gained momentum since May 15. When the ratio is rising it means that MDY is stronger than the S&P 500 Index (SPY). It is typical for midcaps to outperform large-caps in the recovery from a major market decline.

We recently took profits on an MDY trade for clients, but this area has continued to rise this week. It is too early to say whether the recent strength represents a sea change. I wouldn’t bet on it. Stay with large-caps as the default option for equity exposure (see chart below). 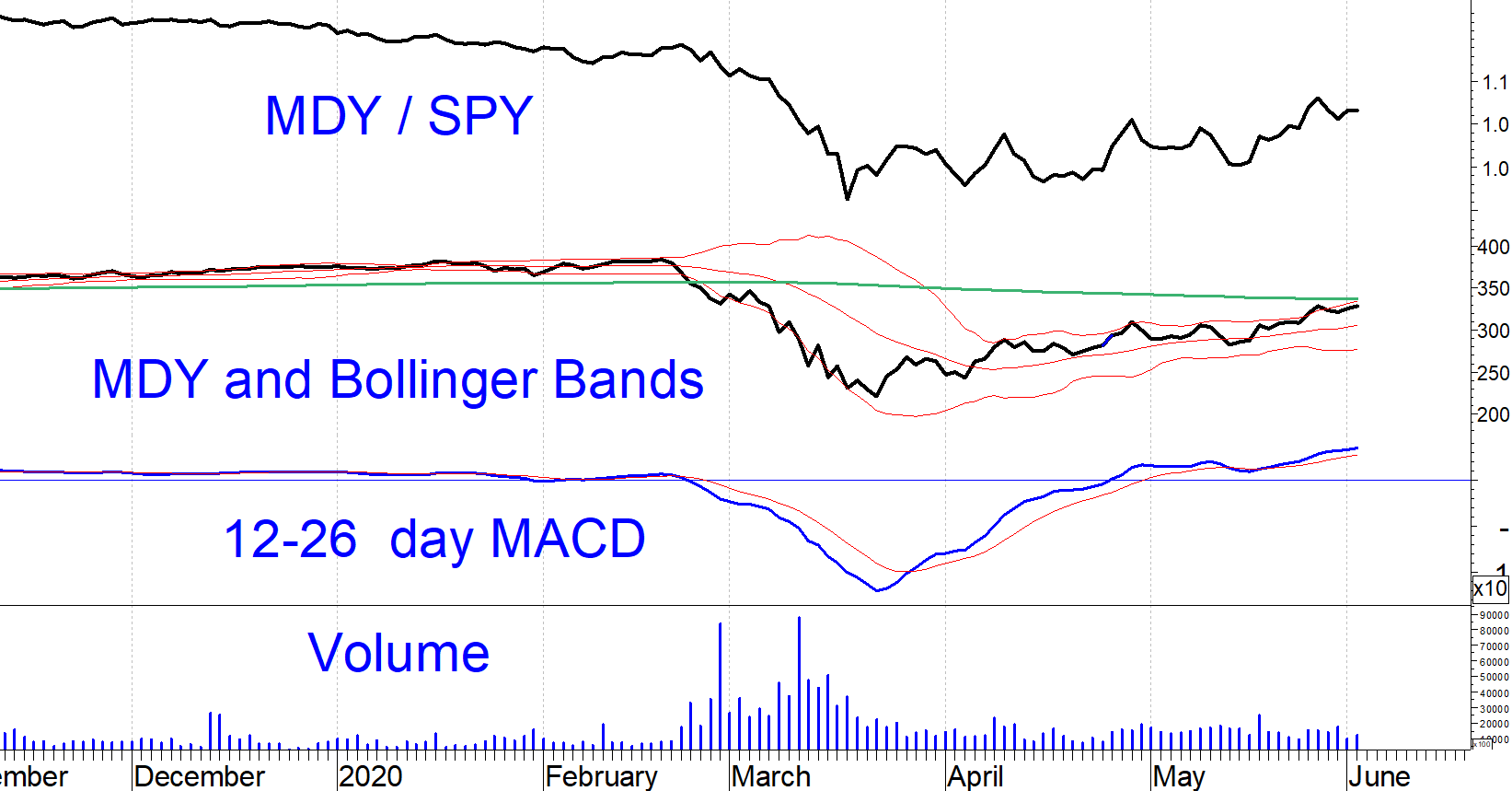 MDY price is at its 200-day moving average and upper Bollinger band where it may face resistance, at least temporarily.

MACD is confirming the price uptrend.

Emerging markets have been in a trend of lagging the S&P 500 Index for years (see top portion of chart below). That long-term trend favoring the U.S. remains in effect, but this week we saw a breakout (circled) in the iShares Emerging Market Index ETF (EEM). 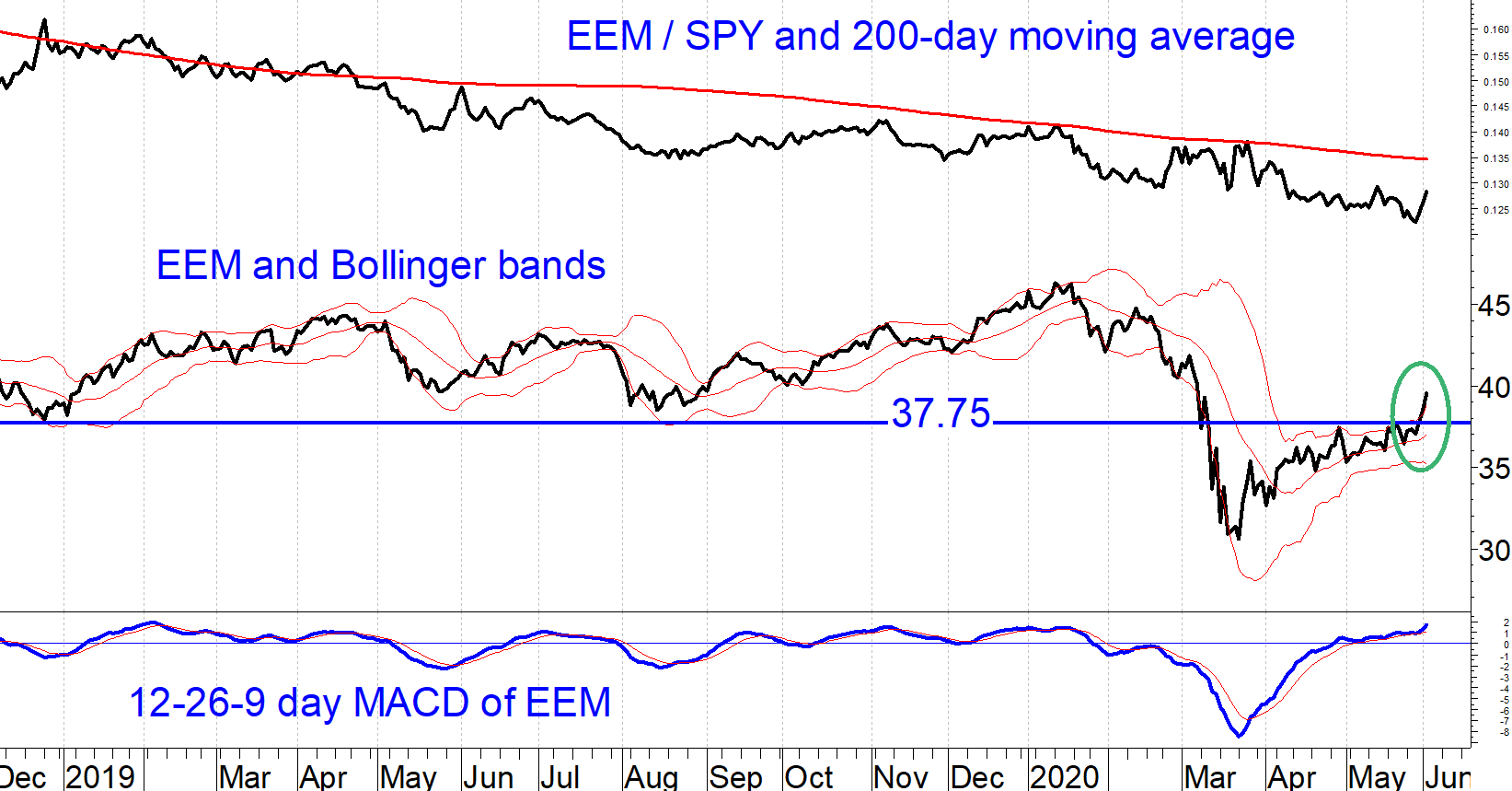 This is a trend worth watching, as periods when emerging markets were favored have sometimes lasted for years and were very profitable. For now, stick with SPY. We will alert you when the EEM/SPY ratio (based on monthly data) indicates that the longer term trend has switched to emerging markets. See chart above.
Implications

Financial markets are never dull. It appears that investors have dodged a bullet and that instead of a protracted 50% market decline with a retest of major lows as in 2000-2002 or 2007-2009, we got a one-month crash.

I remain cautious. Even if the U.S. re-opens, I expect the buying public to remain cautious about dining, shopping, travel and leisure. Amazon is great, but there are some things, especially big ticket items, that consumers will want to shop for in person, and that will require the public to feel safe being out and about in crowds.

We are following our equity timing models, although with less-than-maximal allocations. I continue to believe that open-end corporate high yield bond funds offer the best balance between risk and reward, and as a result we have been more confident in building our clients’ exposure in high yield bonds than in equities.
Subscribe to Signalert's Systems & Forecasts here…