The recent reversal in the euro could test its two-year trend, reports Al Brooks

The EURUSD currency pair reversed down from a two-year bear trend line. But the June rally was exceptionally strong. Traders expect the reversal to become only a two- to three-week pullback from that bear trend line. They will then again try to break above it.

The EURUSD weekly chart triggered a minor sell signal last week when it traded below the previous week’s low (see chart below). The bears want last week to be the start of a reversal down from the top of the two-year bear channel. 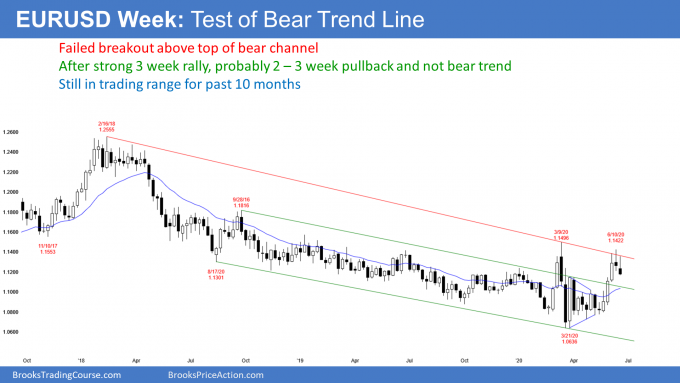 They see two legs up from the March low. The first leg was the big bull bar that began on March 23. The EURUSD then went sideways for a couple of months.

Their second leg up was the three-bar rally that ended on June 10 at the bear trend line. If the bears do get a reversal down from here, that second rally will then be a second Leg Bull Trap in a two-year bear channel.

While it is possible that the previous week was the start of a bear trend, the bears need stronger bear bars. The sell signal bar was a doji. That is a sign of neutrality, and not a strong reversal down. It is a weak sell signal bar.

Last week was the entry bar, but the body was relatively small. That means that the sellers are not yet aggressive. The combination of a weak sell signal bar, an average entry bar, and a very strong rally typically result in a minor reversal. Traders expect a two- to five-week pullback before any other attempt to get above the March high.

It is important to note that there always is a bear case. What happens if the bears form two- to three-big bear bars closing near their lows? Traders would begin to think that the reversal is a bear trend and not a pullback in a bull trend.

Also, what happens if the pullback never looks strong but falls below the April low at the bottom of the two-month range? That again would make traders believe that the reversal down was a bear trend and not just a pullback.

When will the bulls buy?

Even though the reversal is probably minor, it could last several weeks. On the daily chart, the minimum target is the June 3 low of 1.1167. That is the bottom of a strong two-day rally (see below). 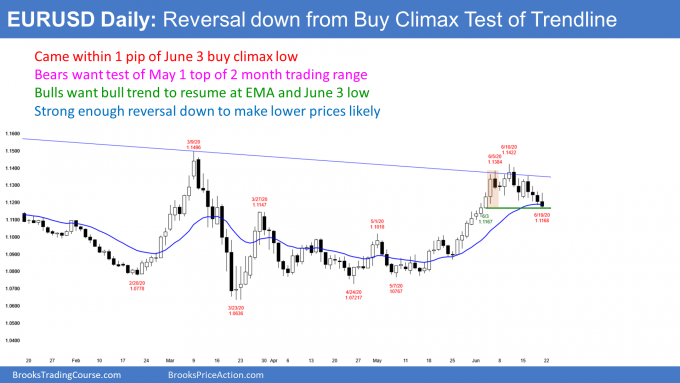 When there is a reversal in a strong bull trend, the first target is always the bottom of the most recent buy climax. That is the June 3 low. This week got to within one pip, and traders expect it to trade below next week

The three-week rally broke strongly above a two-month trading range. Breakouts often pull back to the breakout point. That is the top of that trading range, around 1.10.