Markets soured on the prospects for a US stimulus deal to start the week but that's not the only thing to consider, says Adam Button of ForexLive.com.

As for handholding, it is close to what Ashraf Laidi did to the WhatsApp Broadcast Group today (see below). The Swiss franc was the top performer while the Australian dollar lagged. GBP shrugged Friday's tough Brexit talk as the EU delegation landed in London for a new round of talks. The yen was the top performer last week while the Australian dollar lagged. CFTC positioning data shows the euro's vulnerability. More US housing data is due Tuesday as that market continues to boom.

Below are Ashraf's NASDAQ calls to the WhatsApp Broadcast Group during the final three hours of trading. 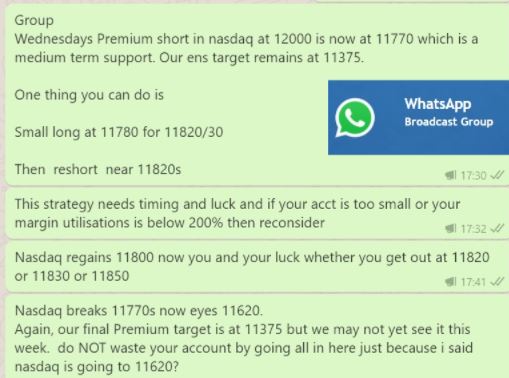 The game of deal-or-no-deal on both sides of the Atlantic was in high gear to start the week. In Europe, a call between Frost and Barnier appeared to thaw negotiations but the UK side sent mixed messages that initially led to GBP strength, only for it to fade later.

A reminder of the stakes came after the close on Friday when Moody's lowered the UK's sovereign rating to Aa3 from Aa2. The cited a soft economy and an erosion in fiscal strength but also added that “the quality of the UKʼs legislative and executive institutions has diminished in recent years.”

In the US, talks between Mnuchin and Pelosi continued ahead of the Tuesday deadline, but messages were mixed. Reports that Pelosi highlighted fundamental differences in values to Democratic colleagues weighed heavily on equities as they fell the most in almost a month. That spilled over to commodity currencies as they gave back early gains.

There are two options now: Bet on an outcome or wait for clear news. There have been so many fake outs in both these negotiations that it's tough to plant a flag on either side. In all likelihood, markets are still placing a high probability on some kind of Brexit deal and a low probability on stimulus. Perhaps that sits at 80/20 in both instances, if not lower for stimulus.

Of course, neither of those are occurring in a vacuum. Ireland closed non-essential retail for six weeks on Monday with European cases continuing to rise, albeit at a slower pace. Q4 GDP throughout the continent is deteriorating along with optimism about Q1.

In the US, voting and election campaigning continue, while there has been a noticeable uptick in Trump's betting odds. That likely reflects an over-reliance on history repeating itself, but financial markets certainly aren't immune to the same thinking. The failure of a short-term stimulus deal followed by a divided Congress would be the worst-case scenario for US short-term growth and associated trades.

Many of the trades in the coming days will be taken as developments happen but one macro trend is showing strength almost everywhere: Housing. The power of low rates was on full display with the US home builder sentiment survey hitting a record high on Monday. Tuesday is housing starts, which are forecast to rise 2.8% with associated permits up 2.0%. Sometime in 2021 or beyond, the rises in home equity will be a large tailwind for growth.

CFTC Commitments of Traders Speculative net futures trader positions as of the close on Tuesday. Net short denoted by - long by +.

The euro net continues to drift lower after hitting a record in July, but rising virus cases, lockdowns, and economic risks combined with sinking Eurozone yields argue for more short covering to come.