We are now less than a week away from one of the most pivotal events not only of our lifetime but also for the history of the republic, explains Jeff Greenblatt of Lucas Wave International.

Having been influenced by the Fed, the stock market is almost an afterthought as to the importance of this election. But since we are traders, we must be prepared. To that effect, here’s what I’m thinking coming into this period.

First, the Dow got the follow through I discussed. From last Wednesday’s snapshot to the close on Tuesday the Dow formed another lower high and dropped roughly another thousand points. This chart is an excellent example of a condition I call “replication” as we see a repetition of the same number only in different ways as the pattern developed. 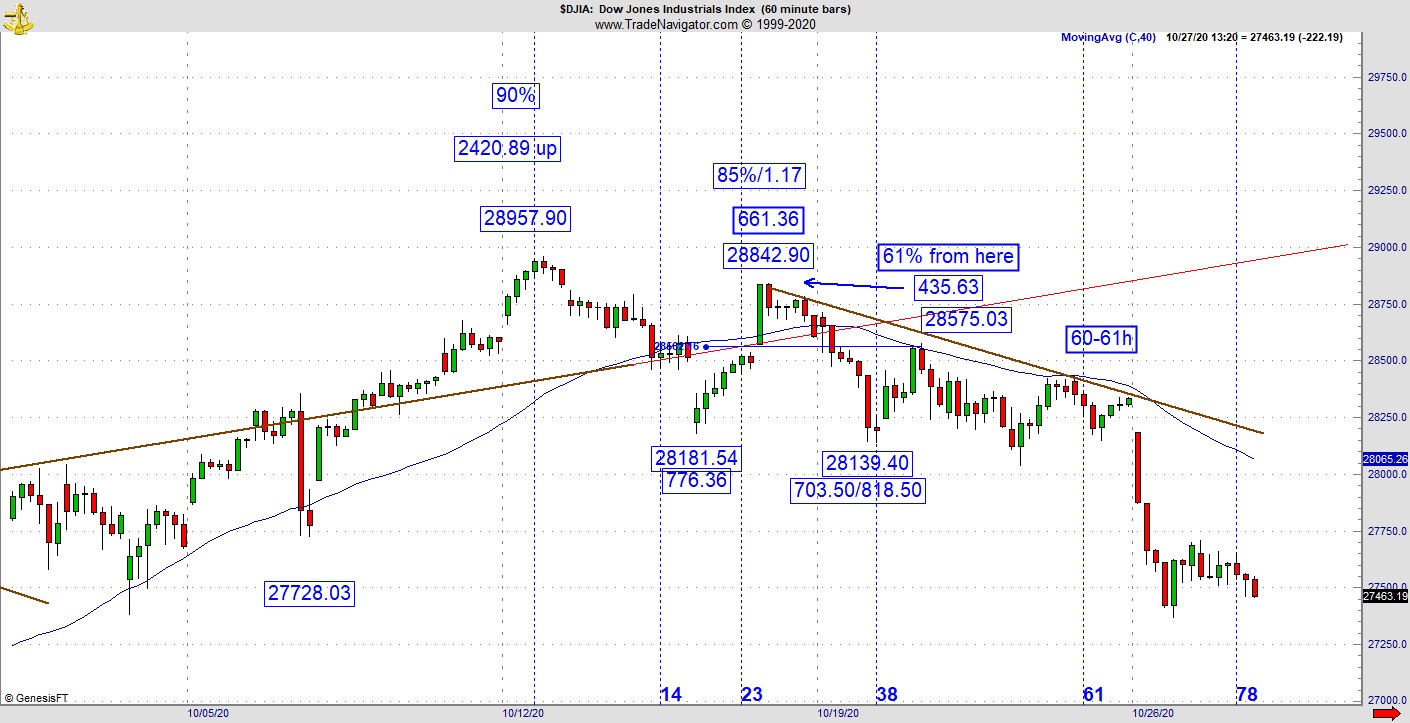 Briefly, we see a secondary, which is 661 points up, which is followed by a small 61% retracement, which is finally followed by a rollover at 60-61 hours off the high. This is the most precise way to buy the dip or sell the rally. Of course, you must do your due diligence to understand how this vibrational methodology works under a variety of different market conditions. The bottom line is once a pattern gets rolling (either up or down) we tend to see lots of replication. It won’t always be a golden spiral 61. It just so happens to turn out that way in this instance.

I remember the action four years ago. The brokers raised margin requirements for the day of the election because of the wild swings. My recommendation coming into this election is don’t initiate any new trades. You can be a hero, or you can make money. Most important to the trader/investor is capital preservation. Live to fight another day and stay on the sidelines until the dust settles. If you are already in positions, take a serious look and draw your line in the sand. Use stops and be sure not to get hurt.

This election is going to be different than anything we’ve experienced. The best part of it is the Mercury retrograde period concludes on November 3. Thus far there hasn’t been too much insanity if you leave out the Biden hard-drive scandal. Since this is about a thousand times more serious then Watergate, if we lived in normal times Biden would have to step aside.

But I do believe Trump will win this election any way you slice it, including all the election fraud. My concern is what happens after Tuesday. One side says they will contest and not accept the results of the election. I’m slowly coming to believe something different is about to happen. Unless we get hit with a real black swan that causes something to dramatically change between now and then, I think the leadership on the left will stand down. Why do I believe that? Clearly, we have a scandal unparalleled in American history. What the Bidens have allegedly done is enough to put them both in front of a military tribunal. But we don’t live in normal times. I’m sure you’ve noticed the timing of the release of the news of these hard drives. Trump had these files a year ago just as the FBI did. He has access to everything. I’ve heard NSA whistleblower Bill Binney state he taught Trump how to access all the NSA files.

Can you imagine the FBI held all this information and allowed the country to be dragged through the impeachment process? There are no words for this. Why are we talking about it?  A reliable source, Trunews believes a deal may have been struck by Trump and the Bidens where the far left stands down and the Bidens get to walk. Don’t think this scandal ends with Presidential candidate Biden, these activities go all the way to the top. That’s right, none of this could have happened without the knowledge and consent of Obama. I think there is an incredibly good chance the left postpones their revolution to 2024. But that doesn’t mean they’ll be able to control their base, which looks like they are ready to go crazy in the event of a Trump victory. Is this etched in stone? No, things can and will change. Four years ago, Trump said he was going to “lock her up.” But she conceded right on election night. Trump never went after her. I think the same thing could happen again.

So, this isn’t going to be easy and its best to take a step back with your trading decisions for a day or two.

For our trading segment I want to discuss what the psychology of a developing trader looks like. The process of becoming a winning trader is one of rewiring your brain for success. I’ve discussed neuroplasticity in this space many times. When you engage in a new activity, little neuropaths in the brain start to develop. The more you indulge, the more they grow. If you are going to make money as a trader, you’ll need to engage the market with the best possible risk/reward ratio where you know what your edge is.

This means you can’t get in too late. It also means you’ll have to take positions on some of the scariest places on a chart. What does that mean? After a 900-point drop in the Dow, would you consider going long if a buy signal materialized? Right now, as you read this, you may be saying of course you would. But in the heat of the real time moment, will you have the courage to push the button when the pattern comes off the low and you get the first pullback opportunity that lines up properly? It could easily fail. I don’t advocate picking tops or bottoms, but secondary pivots are great points of entry on the long and short side.

If you do have the courage, you may catch an important intraday leg going in the new direction. Believe me, it’s scary in this environment. At first you may be happy enough to push the button in the right place and get some points. But you may get 30 points and be happy to take those profits but what happens when you find out that move covered 200 points?

Here’s the rub. It’s a process and you must grow into being a winner. If you’ve never taken trades in the right place it can be a mighty frightening proposition. Let’s use a sports analogy. We’ve all seen pro sports teams go from the bottom to the top in a space of a few short years. Teams must learn how to win. We’ve seen football teams lose 5 or 6 games by less than 15 points. With some adjustment and improvement in strategy and culture, these teams can dramatically improve within a year to find they start winning these games. But that still doesn’t mean they are ready for the championship. Trading is the same way. Once you get to the point where you start winning small by taking trades in the right places, the only thing left to do is slowly grow your courage over time to take those small winners and make them bigger.

Winning at trading is a process which has no shortcuts. The neuropaths must be able to grow and develop from winning small to something better. It’s also important to realize there are things beyond our control and next week is one of those times.