Its been a while since we looked at interest rates in this space. The way I do it is by looking at the 10-year price, which has an inverse relationship to the rate, explains Jeff Greenblatt of Lucas Wave International.

The bond market was in a brutal correction from 2016-18 and when it felt like it was going lower and not coming back, the crowd panicked because rates drifted higher. People thought it was the greatest economy in history. The reality was it couldn’t even handle a small spike. The normal end of the business cycle usually has rates going up in a serious way, not a drop from an all-time high. Look at the end of other business cycles, I’ve stated in this space the long-term average for the 10 year is 4.52% while the highest rates got in 2018 was 3.15% according to Ycharts.com. The past business cycle couldn’t even support rates at the long-term average. How pathetic is that? 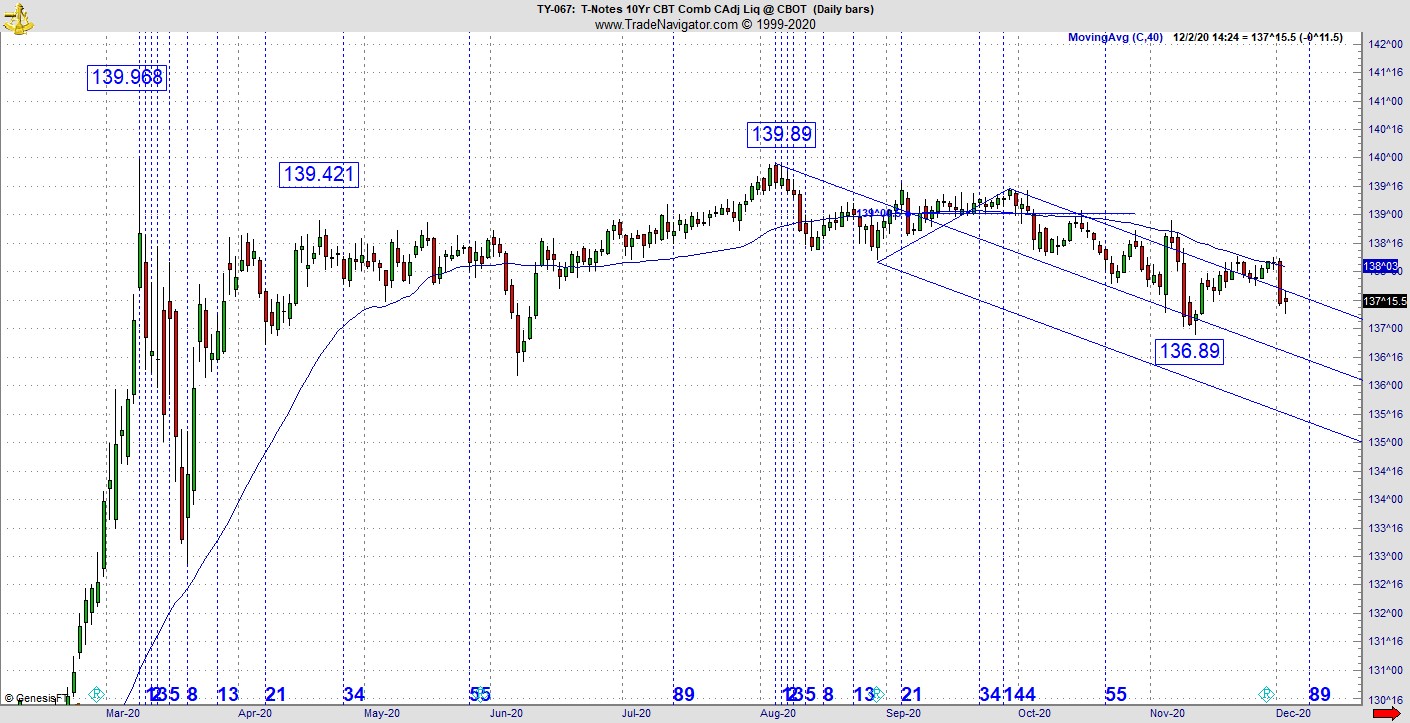 Folks from my generation remember rates at 18% at the end of the inflationary 70s. With oil and interest-rate spikes, the 70s were a corrective reaction to the greatest business cycle this country ever had from 1949-60. The reason our country enjoyed such prosperity is that we were the only country, which did not have infrastructure damage from the war. On top of that, we were the arsenal of democracy that supplied armaments to our allies, the British, to help them overcome the Battle of Britain in 1940.

So, the question becomes how to handicap future rates in an era of helicopter money. The answer is always embedded in the chart. The high was back in March just as the lockdown started. The high got a close retest in early August and has stumbled lower ever since. At this moment, the high is secure and a retest of the low is on deck. Our first view is the daily, which is in the weaker channel of the pitchfork and threatening to break through and out of the channel. That would be bullish. On the other hand, the weekly chart shows a major test of intermediate level of support. 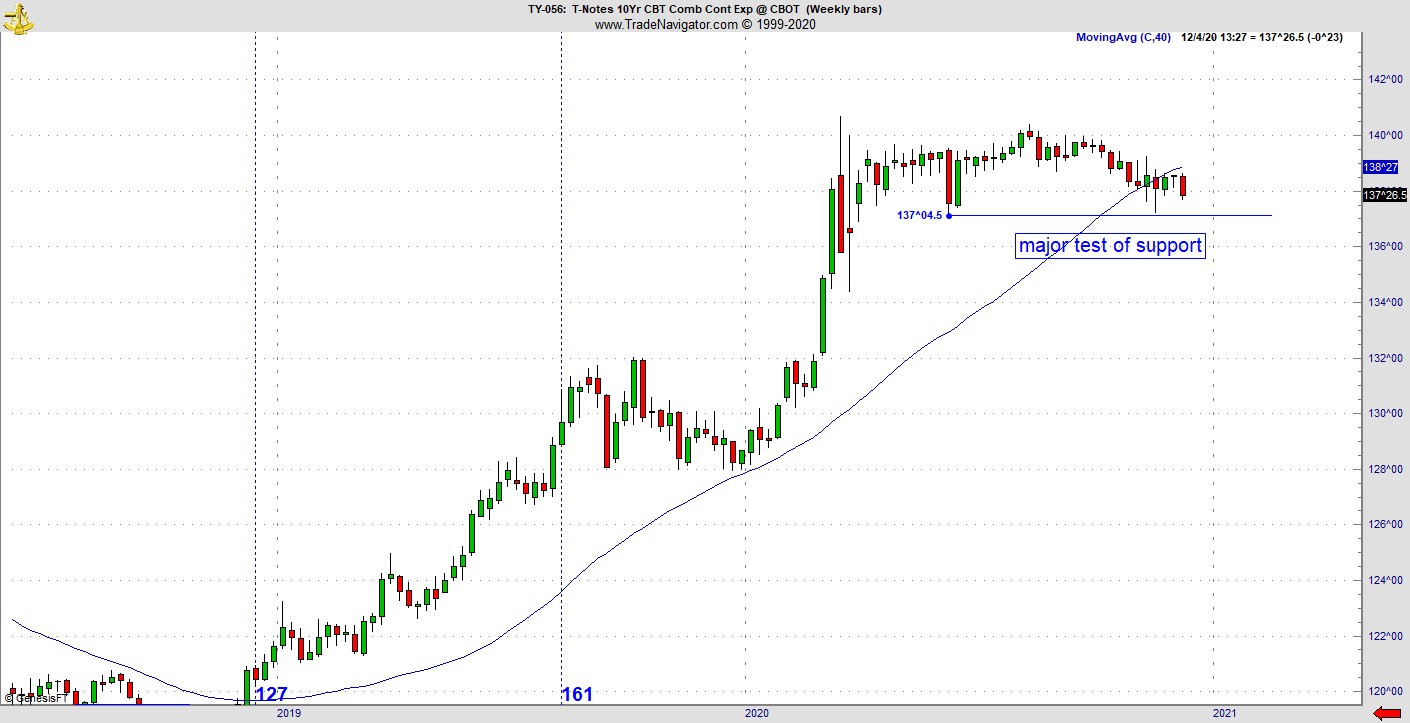 Are we at risk for higher rates? Not yet. If support were to break, the next test would be the October 2019 high where it would likely have an extensive test unless there is an existential crisis in the country or the world. It's hard to imagine rates going higher in this environment where there is little to no demand for money. I’ve heard millions of Americans who have not paid rent for months will be subject to eviction come January 1. Congress is going to have to act to save the day, they are talking again but in case you noticed, there is no mention of another direct payment to Americans. They are willing to extend unemployment insurance, but it will be capped at only $300 per week when during the first lockdown we all know it was $600 per week.

At this point there has been no talk of relief for the millions of real-estate owners (commercial and personal) and landlords. In case you haven’t figured it out, the Royal Canadian Mounties are not coming to the rescue this time. Christmas, the economic savior to American retail is all but cancelled this year. You think 2020 has been a rough year? This is nothing compared to what is coming in 2021. This is not even assuming there will be higher rates. Think about this, if a relatively decent economy in 2018 couldn’t support long-term rates around 3%, how would it handle any hike in rates with the country flat on its back?

It’s nice the market is at all-time highs, but it doesn’t mean much. The prosperity the big banks are experiencing right here will not translate to the guy on Main Street, largely because the small-business owner on Main Street almost doesn’t exist anymore. Practically nobody is talking about this. I’ve told you for months the economy hasn’t and will not recover. Now I’m also telling you not to delude yourself into thinking things will go back to normal when they come with the vaccine. It’s never going back to normal. How do I know? The health authorities tell us all the time. You need to listen to them because in this one instance, they speak the truth.

Let’s look at the trade of the day. It used to be I feared the first hour of trade due to the extremely quick moves and insanity. It's still scary because of the wild swings. But there is a method to the madness. The market was higher on Wednesday. Want to see the technical reason why it went higher? In one respect it was quite simple. The low came in at :34 minutes after the hour and only four minutes into the session. I’ve been teaching on a principle for years, which is called replication. This means similar numbers will repeat in the same pattern but in a different way. 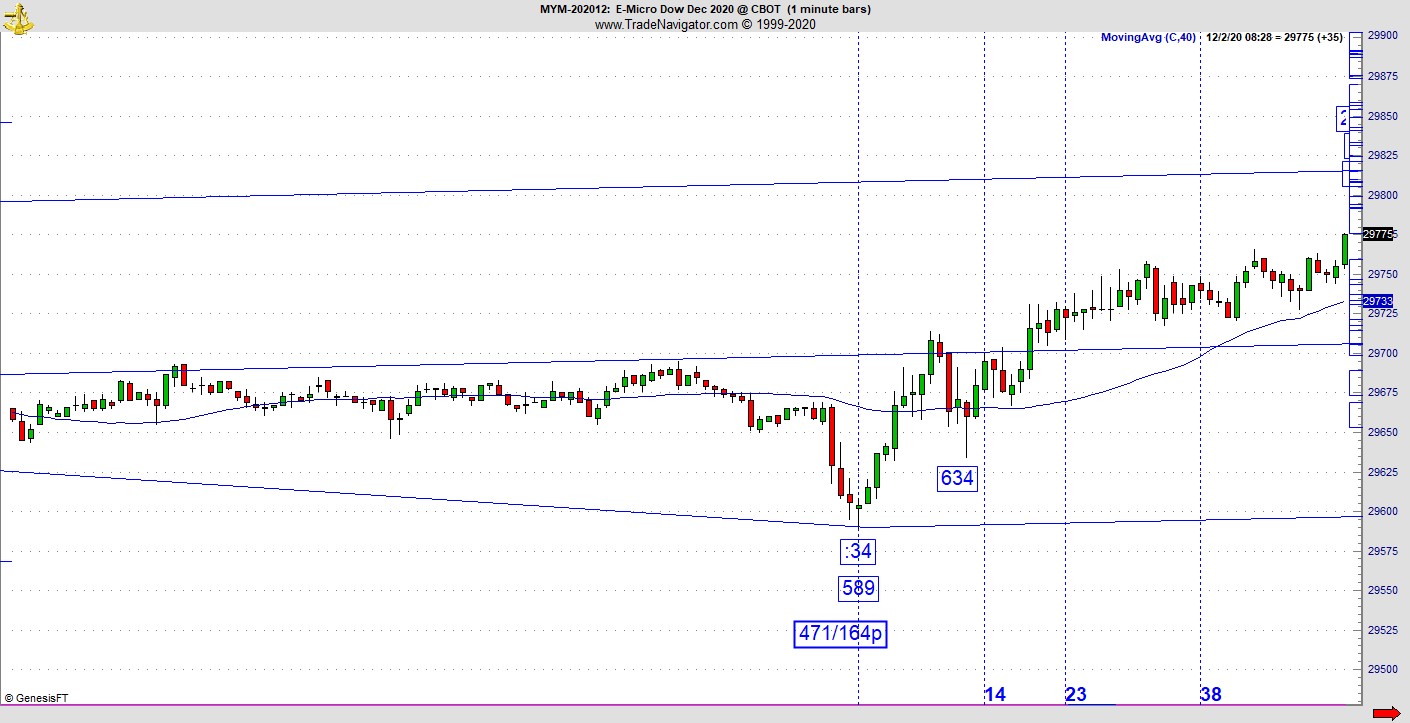 Case in point: Wednesday the low comes in at :34, the secondary low, which came in with a lower tail had a price of 29634. The buy signal came after the lower tail bar on this chart was taken out. It's nearly impossible to know such a pivot could be the beginning of the big move of the day, but that’s exactly what happened here. Finally, to pull off such a trade requires a lot of practice. You should train your mind to observe these tendencies on a simulator. Do not attempt this type of trade until you can recognize this opportunity like it's second nature to you. Once you do put in the work, be it price and time or some other method, you should get to the next level.