Market Outlook: Partly Sunny with a Chance of Showers

Last week I shared that the bears were running out of scenarios where they could get a decent meal. They have been let out of the cage to feed, but time and time again rudely cut short just when it looked like the bottom could fall out, explains Jeff Greenblatt of Lucas Wave International.

Reference my MYM chart from Tuesday. It was an incredible setup, it dropped well but the party somehow stalled. On Tuesday there was a pivot that was 61-15-minute bars up at the same time it was 144-15-minute bars from the prior high. That was significant because the prior leg down was 143 points. Additionally, it was 288 hours up from the March 25 low. When we have pivots that are lining up at 144 as well as 288, this is Gann master 12 stuff. Over the years I’ve seen setups similar to this spawn real market pullbacks in the very least. This one barely lasted a day. By Wednesday it was already taken out to the upside. Since this drop came in on the back end of the 261-day window, I thought I might be coming here this week to talk about a high. 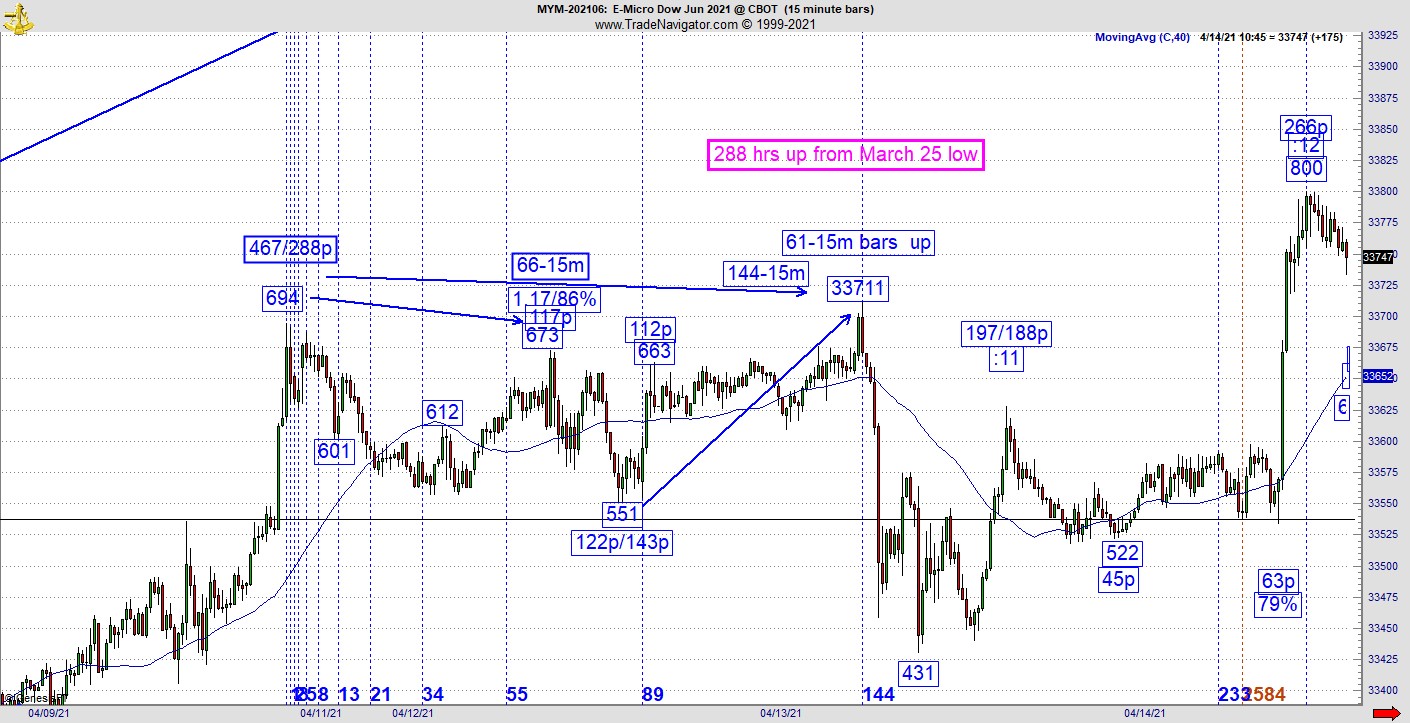 Instead, I’m talking about a failed attempt to go down. So, let’s be clear, price and time readings work as referenced by this 280 drop. In the old days, a 280-point drop might set off a fear program. Now it hardly registered as a blip because most of the this drop materialized in the middle of the night and by the day session had fully recovered. Asking whether price and time works is not the question. The real question is what do we make of a really good setup lasting less then a day?

It means the bulls are still strong enough to overcome. We don’t know who the buyers are, for all we know it could be the plunge protection team. What I can tell you in all time frames when a really good pivot ends up getting violated it means there is still gas in the tank going the other way and it could end up considerably higher. Bill Williams in his landmark work called Trading Chaos teaches the market continuously offers up new bits of information. It is our job to figure out what this ‘new information’ means. If you want to trade without using lagging indicators, you’ll have to be your own best intel officer and learn to connect your own dots. If you are a bear, it likely means “not yet.”

I’ve also been looking to the Ten Year for clues because if that one drops, we are all in a heap of trouble. Recall that in the 4th quarter of 2018 when interest rates spiked and the market got clobbered, longer-term rates were still about two percentage points lower than the long-term average, yet the market predicted the economy would not be able to sustain even those rates which weren’t that high. In recent days, the Ten Year flirted with a breakdown but instead got locked into a tight range. I have two charts and the verdict is the action is slightly bullish. If it were to breakthrough to the upside, it could aid the stock market in going higher. You never know since higher pricing, which implies lower rates, could be a harbinger for a recession. But the narrative here is for the “reopen trade” so nobody is considering the bad outcome right here. 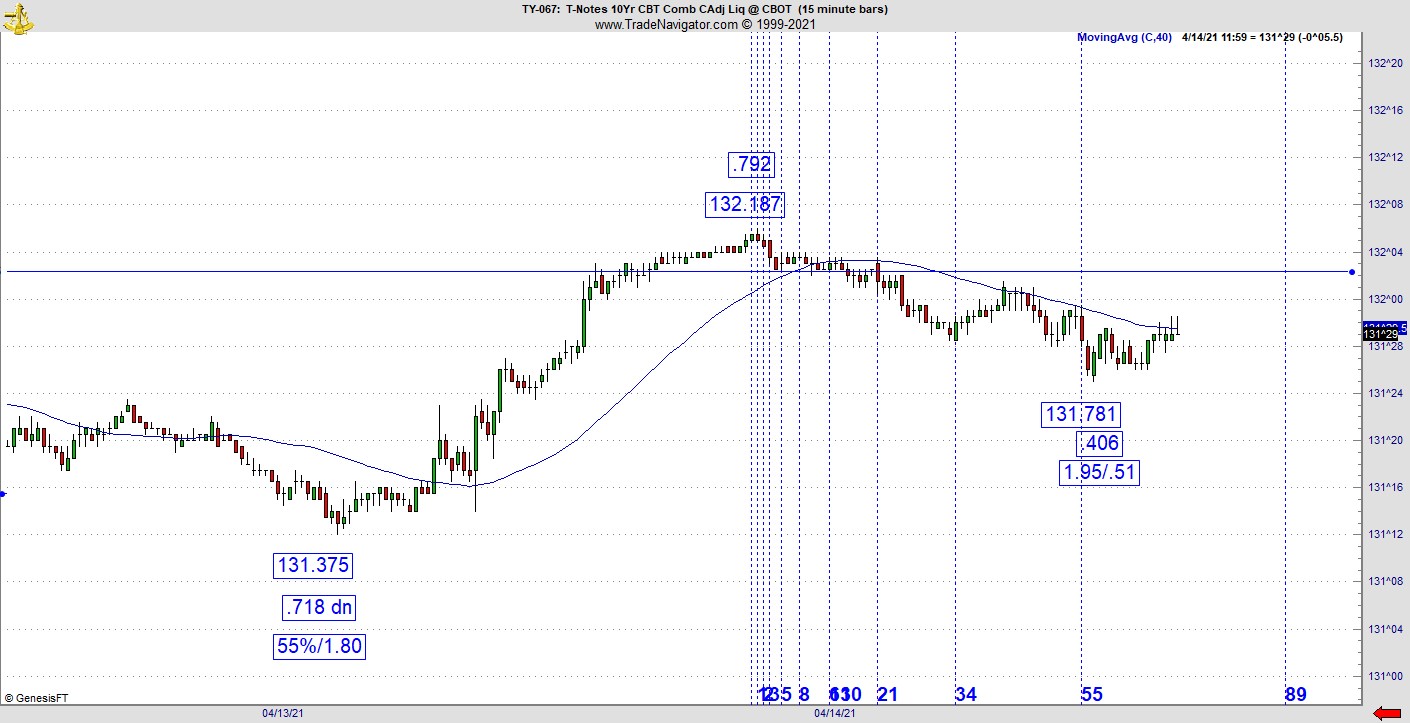 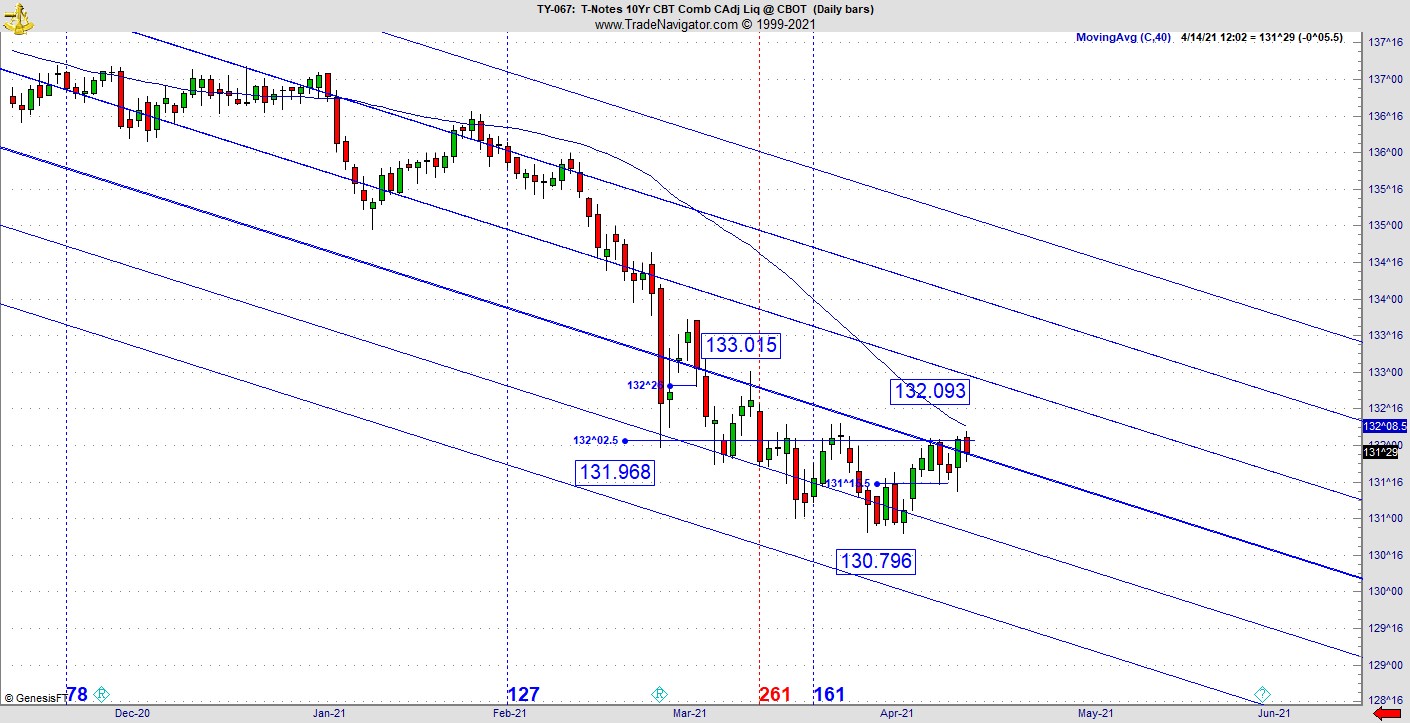 So, if higher rates aren’t on the horizon yet, is there a condition that could sink the market? In fact, there is. The drums of war are getting louder in the Ukraine. According to Israeli News Live the Biden administration has signed on to a deal they’ve agreed to with Israel to build a natural gas pipeline that would be fed into Europe as opposed to the Nord Stream 2 Putin wants their pipeline to be the one to feed nat gas into Europe thru Germany. It's actually a better deal for the people of Ukraine and Europe because the Russians are able to offer the gas at a discount compared to the Ukrainian pipeline the Americans are supporting. It’s always about the oil. Are you surprised? As I previously reported, the Russians are massing troops in the Artic region as the rhetoric heats up. The latest news has the Kremlin studying a proposal for a summit with the Biden administration but have not accepted. At the same time the Russian navy is holding snap live-fire drills in the Black Sea according to the Daily Mail. Conditions are moving rapidly as the two superpowers inch closer to the war that was avoided during the Cuban missile crisis.

None of this is reflected in the charts as market participants likely have a good case of normalcy bias working. Let’s hope they are right since Napoleon and Hitler met their end chasing the Russian bear, its unlikely the US will be able to beat them either. Since the market is a discounting mechanism, they have not baked any of these “geopolitical tensions” into the cake so if something were to happen, the market would likely get hit extremely hard with little warning. My best advice is to get some good alternate media source so you’ll at least be able to make your own trading and investment decisions based on good information.

Since nothing has happened yet, we circle back to the bond chart to see if the Fed’s easy money policy will keep this “reopen trade” working for the time being.