10 of the 11 S&P SPDR sectors were profitable in April. The best-performing sectors were Real Estate (XLRE), Consumer Discretionary (XLY), Communication Services (XLC), and Technology (XLK). Consumer Staples (XLP) and Energy (XLE) were the laggards for the month. The major averages were all higher in April, with the Dow up +2.7%, S&P 500 up + 5.2%, its best monthly gain since November, and Nasdaq rising +5.4%, it's sixth straight monthly gain.

After breaking the uptrend from January (red line) the previous week, 10-Year Treasury yields rose last week, breaking the downtrend (in purple), closing at 1.631%, the highest level since 4/13.

It would be positive if rates could fall below 1.5% (orange line). On the other hand, a close above 1.7% would imply higher rates and likely increase selling of growth stocks but help financial stocks.

Weekly market breadth was neutral. The New York Stock Exchange Index had 1761 advances and 1672 declines. Nasdaq had 2168 advances and 2198 declines.

It remains concerning with the Nasdaq near record highs that daily new highs are not expanding (orange line), closing at 117 (blue circle), not surpassing 269 new highs on 4/5/21, and well below the peak reading of 708 set on 2/8/21. Watch if this trend continues higher or if new highs begins to broaden, or if they continue to lag. If new highs continue to weaken, expect short-term weakness in Nasdaq.

Watching the new lows on the New York Stock exchange is a simple technical tool that helps awareness about the immediate trend's direction. In my book Journey to Wealth, when the new lows are below 25, the market is very strong (very low risk, and prices tend to rise).

On 3/25, the NYSE new lows peaked at 207 (orange circle) and then immediately contracted to 11 on 4/1 (blue). On 4/30, new lows closed at 26, their highest reading in the past five weeks slightly above the most bullish zone (purple rectangle), but not yet in a high-risk area continuing to show healthy underlying internal strength.

Continue to monitor the new lows on the New York Stock Exchange if they start to expand.  As long as they remain between 25 and 50, risk is low, and the odds of a further rally are likely. On the other hand, if new lows begin to expand, it would suggest a higher risk environment, and more caution is needed.

What ETFs to observe this week for direction? 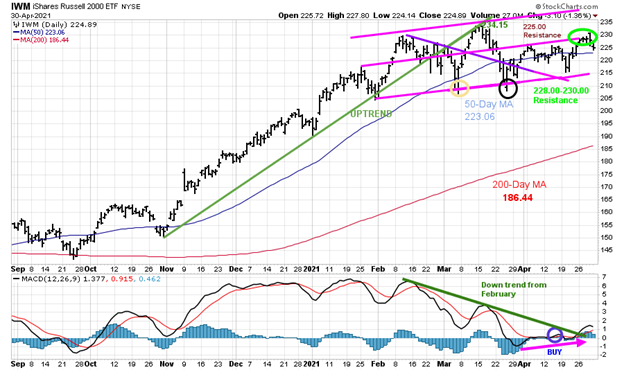 After slightly penetrating the bottom of the channel and the 50-day MA (yellow circle), on 3/5, at 207.21, IWM stalled at 234.15, the upper channel that coincided with the old uptrend line from November (in dark green). Then IWM fell below the 50-day MA to the lower channel (black circle), where the buyers stepped in, successfully testing the March 4 low.

The bottom half of the chart is MACD (12, 26, 9), a measure of momentum. MACD is on a buy (blue circle), turning up from below 0. MACD this past week broke the downtrend from February (green line), implying downside momentum is complete, and IWM is likely to go higher.  For those of you who are day trading, note the hourly MACD is now below 0, in an oversold condition. An hourly close above 227.00 would imply a rally is likely sooner rather than later. Time will tell.

The top part of the chart shows the daily Invesco PowerShares (QQQ), an exchange-traded fund based on the Nasdaq 100 Index with its 50-day moving average and 200-day moving average. On 3/31, QQQ broke the downtrend from February (green line) and then gapped higher (black circle), breaking out to the upside.

QQQ remains in an uptrend since March. The upside objective is 358.00.

A close below 320.00 would break the March uptrend (pink line) and increase the odds of immediate short-term weakness towards 305.00.

A close below 305.00 would break the November uptrend (blue line) and imply the start of a more significant correction.

The bottom half of the chart is MACD (12, 26, 9, a measure of momentum. After the MACD March buy (green circle) and big thrust to the upside, MACD has turned down, now on a sell. The sell is likely not to be as significant, with QQQ holding above 320.00 support. With the hourly chart oversold, it would be positive if QQQ can turn up early in the week. 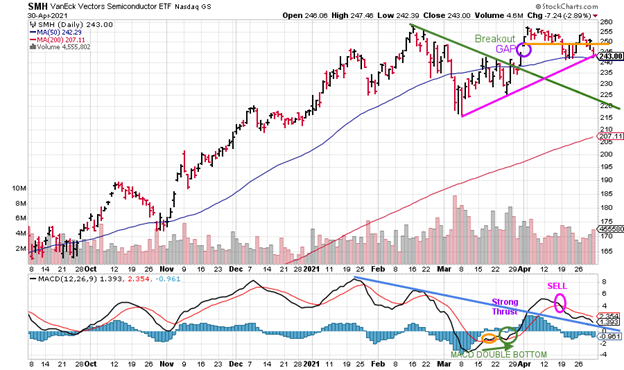 The top chart shows Semiconductors (SMH) broke its downtrend on 3/26 (green line). SMH then gapped up (purple circle), breaking out to a high of 256.68 on 4/8. SMH reversed lower and filled the gap on 4/19. It concerns me that SMH is unable to sustain any upside momentum.

The lower chart is MACD, a measure of momentum. After rising from a favorable double bottom formation (green arrow), MACD generated a sell quickly. MACD remains above the downtrend (blue line) after the strong thrust in momentum but is not yet below 0 for a safe entry.  Similar to QQQ and IWM, the hourly chart is in an oversold position. However, SMH money flow has turned up, which is implying traders are stepping in to buy. 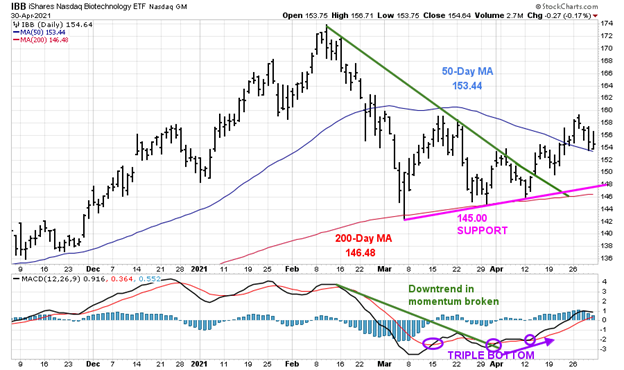 Biotechnology (IBB) successfully tested its March and April low breaking the downtrend from February on 4/14/21.

MACD (bottom chart) remains on a buy from a triple bottom formation, one of the most bullish technical patterns.  Continue to hold.

*Effective on or around June 21, 2021, the iShares Nasdaq Biotechnology ETF (Nasdaq: IBB) will seek to track the ICE Biotechnology Index. The fund will also undergo changes to its name and investment objective. No action is necessary for investors in the impacted ETFs and no capital gains distributions are currently expected as a result of the transition. Source: Business Wire 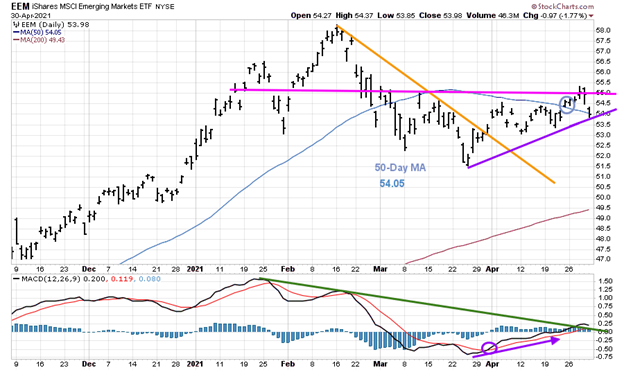 Emerging Markets remains in an uptrend from March (purple line) and in a trading range since early April. EEM started the week higher but could not hold onto its gains, down -1.19%, closing at 53.98. EEM slightly below its 50-day moving average after being above for the first time since February.

With MACD on a buy and the downtrend from February (green line) broken and EEM above 52.50 continue to hold.

The major averages were up early in the week as companies reported excellent earnings but could not hold onto their gains. It’s positive that key support areas have held so far, even with investors concerned about rising inflation and possible tax hikes. Momentum oscillators are oversold in the short term (hourly basis). If Semiconductors, Technology, Biotechnology, Small Caps, and Emerging Markets show strength early in the week, further upside is likely in the near term. With the uptrend intact and support levels holding, the bulls remain in control for now. On the other hand, a close below 207.21 for IWM and below 305.00 for QQQ would imply the longer-term trend is in jeopardy.

I would love to hear from you. If you have any questions or comments or would like to chat about the market, email me at bonnie@bonniegortler.com.