Gold Glows Ahead of US & Canada Jobs

US and Canada jobs data are front and center, with gold and GBP clearly edging higher vs. USD, says Adam Button of ForexLive.com.

GBP awaits the results of the Scottish elections, which will likely be finalised on Saturday. Gold and silver broke into key levels as the Bank of England was the latest central bank to fear tapering more than its shadow. The BoE performance on Thursday was a mess as officials tapered and at the same time desperately tried to avoid saying they tapered.

US non-farm payrolls and Canadian jobs are due up next (more below) The following are selections from the WhatsApp Broadcast Group, with insights to go long XAUUSD at 1781 targetting 1791 and the follow-up to target 1811 upon the break of 1801. Clients were also forewarned ahead of the BoE decision for a preliminary drop towards before the subsequent rebound. 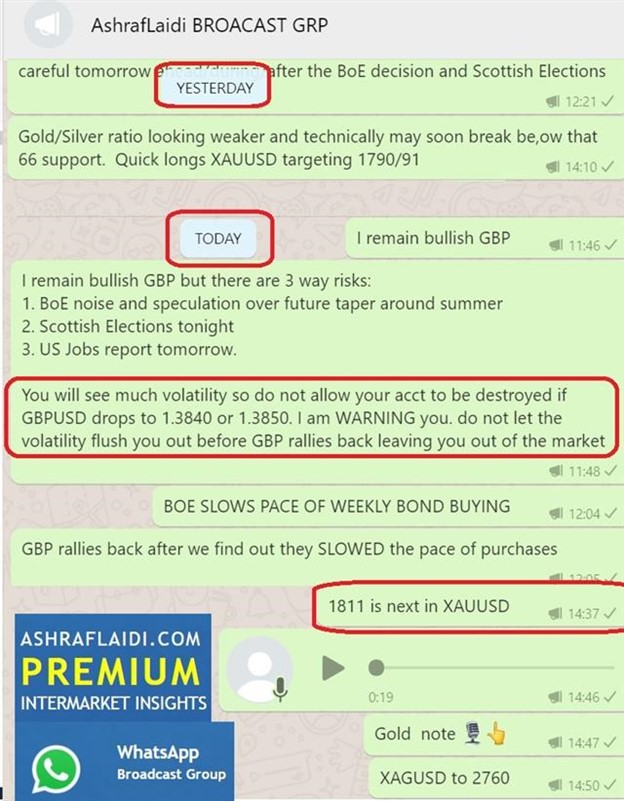 Cable traded in an 80-pip range in minutes after the BoE announcement as traders and algos were left confused by a statement that was more or less unchanged followed a minute later by the monetary policy report, which said the pace of QE purchases could be slowed somewhat. Cable initially dropped to 1.3858 then spiked to 1.3940—both session extremes.

It was a communication mess, largely because Bailey was frightened (no other way to put it) to admit to anything like tightening or signal that it's on the horizon. There appears to be a strong school of thought outside of the Bank of Canada that markets and the economy can't handle any taper talk. Given the enormous improvements in the global economy, it's all getting a bit ridiculous.

Outgoing chief economist Andy Haldane dissented in favor of a real taper. His comments with it emphasize a different possible approach, noting that there's evidence of a rapidly recovery economy and good reason to believe it will be maintained.

The risk is that by being overly cautious, central bankers will fall behind the curve. A brighter outlook along with associated inflation risks are a big part of the gold recovery. It rose to the best levels since February on Thursday, rising $30 to $1815.

Further evidence of economic strength could come in jobs reports from the US and Canada. Non-farm payrolls are expected at exactly 1 million but digging through the estimates, there's a clear skew higher. There's every reason to believe there was massive hiring in April, notwithstanding the disappointing ADP print (it also underestimated March jobs by nearly half). Economists tend to get gun shy when predicting extremes so there's room for an upside reading, with some bolder economists calling for 2m jobs. The unemployment rate is expected to ease to 5.8% from the prior 6.0%, while average hourly earnings edging up to zero from -0.1%. (Editor's Note: Non-farm payrolls rose 266,000, which was a lot less than the 1 million expected, and unemployment rose to 6.1%).

In Canada, it's a different picture as many parts of the country went in a tight lockdown in April that has continued. The consensus is between -150K & -160K. The loonie is trading at four-year highs though, and is looking beyond this tough stretch, so this datapoint is likely to be ignored. (Editor's Note: Canada lost 207,100 jobs and the unemployment rate rose to 8.1%)